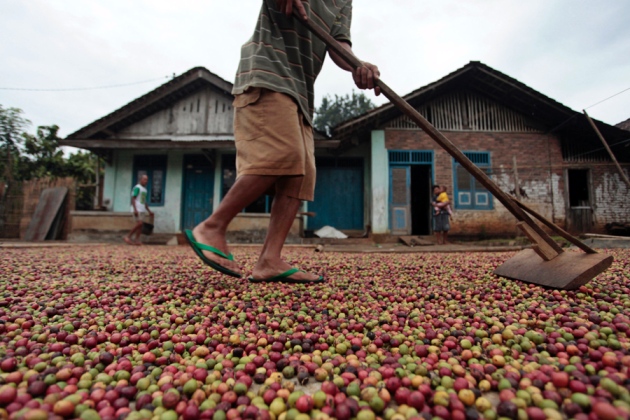 Robusta coffee berries left to dry in the Sun on Sumatra, in Indonesia.

Caffeine's buzz is so nice it evolved twice. The coffee genome has now been published, and it reveals that the coffee plant makes caffeine using a different set of genes from those found in tea, cacao and other perk-you-up plants.

Coffee plants are grown across some 11 million hectares of land, with more than two billion cups of the beverage drunk every day. It is brewed from the fermented, roasted and ground berries of Coffea canephora and Coffea arabica, known as robusta and arabica, respectively. An international team of scientists has now identified more than 25,000 protein-making genes in the robusta coffee genome. The species accounts for about one-third of the coffee produced, much of it for instant-coffee brands such as Nescafe. Arabica contains less caffeine, but its lower acidity and bitterness make it more flavourful to many coffee drinkers. However, the robusta species was selected for sequencing because its genome is simpler than arabica’s.

Caffeine evolved long before sleep-deprived humans became addicted to it, probably to defend the coffee plant against predators and for other benefits. For example, coffee leaves contain the highest levels of caffeine of any part of the plant, and when they fall on the soil they stop other plants from growing nearby.

“Caffeine also habituates pollinators and makes them want to come back for more, which is what it does to us, too,” says Victor Albert, a genome scientist at the University of Buffalo in New York, who co-led the sequencing effort. The results were published on 4 September in Science1.

When the team looked for gene families that distinguish coffee from other plants, those that make caffeine topped the list. The genes encode methyltransferase enzymes, which transform a xanthosine molecule into caffeine by adding methyl chemical groups in three steps. Tea and cacao, meanwhile, make caffeine using different methyltransferases from those the team identified in robusta. This suggests that the ability to make caffeine evolved at least twice, in the ancestor of coffee plants and in a common ancestor of tea and cacao, Albert says.

The genome could be used to identify genes that help the plant to combat diseases, such as coffee rust, and to cope with climate change.

Caffeine-making genes might also be inactivated to create a tastier decaf. A coffee cultivar that is genetically engineered to be caffeine-free could be a welcome development for the many people who cannot tolerate the buzz. The process of removing caffeine currently involves chemical processing, and also affects the flavour (see 'Plant biotechnology: Make it a decaf'). “I have to have a cup every morning, but I usually don’t drink during the day because it makes me shaky,” says Albert.