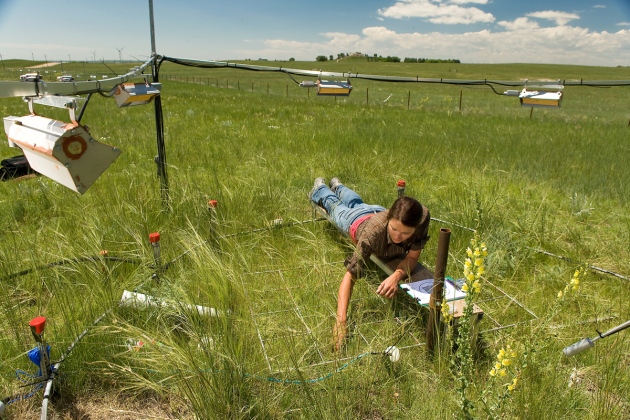 Rising levels of carbon dioxide in the atmosphere may be lengthening the growing season of grasses and other plants, according to a study published today in Nature1.

Previous studies have documented a lengthening of the growing season in many parts of the world. In the United States, the time between the last spring frost and the first autumn freeze has gone up by nearly two weeks since 19002; in Europe, a study of more than 540 plant species found that, on average, spring events such as flowering had shifted about a week earlier from 1971 to 2000, and the onset of autumn had been pushed back by about four days3.

Such shifts have long been attributed to warming temperatures. But CO2 also plays a part, says study co-author Heidi Steltzer, an ecosystem ecologist at Fort Lewis College in Durango, Colorado.

Steltzer and colleagues examined grasslands in Wyoming over five years. They heated some experimental plots, each measuring about 8.5 square metres, to 1.5 °C above normal temperatures during the day and to 3 °C above normal at night. The researchers exposed some other plots to CO2 levels 1.5 times higher than normal, and subjected some to both elevated CO2 and warmer temperatures — conditions similar to those expected by 2100 under some climate scenarios outlined by the Intergovernmental Panel on Climate Change.

The researchers tracked when the leaves and flowers of six common species of grass and shrub first appeared, when the seeds matured and when the leaves turned brown. The results varied drastically from species to species and year to year. But on average, the growing season was 6.2 days longer in plots they had warmed, and 14.2 days longer in the plots they had both warmed and exposed to elevated CO2.

Scientists have previously observed4 that adding extra CO2 can increase plant growth — at least temporarily, until the lack of other nutrients such as nitrogen start to limit growth. But this is the first study to estimate the effect of increased CO2 on growing season length. “Nobody had quantified it before, in part because it’s hard to quantify,” says Steltzer.

As CO2 levels rise, the small breathing pores in leaves called stomata close up, which also prevents water loss. “When you have a water-limited area like Wyoming, the initiation of the growing season is when it warms up, but the end of the season is usually when you run out of water,” says Steven Running, an ecologist at the University of Montana in Missoula. Elevated CO2 levels help to conserve water and extend growth later into the season. Running expects that the results would hold true in any water-limited area, including most grasslands and many forests.

Richard Norby, an ecosystem ecologist at Oak Ridge National Laboratory in Tennessee, says that the size of the season-lengthening effect was especially dramatic for some species, but cautions that not all locations will see the same effect. His own work on sweet-gum forests in Tennessee, for example, saw no season-lengthening effect from elevated CO2.

And the Wyoming results are not necessarily all good news for agriculture. Higher levels of CO2 might cause flowering plants to fall out of sync with the life cycle of pollinators such as bees, or make some weeds more prevalent, says Norby.

“They saw very different effects between species, so you’re definitely going to see winners and losers,” says Running, who predicts that climate change could radically shift species compositions in grasslands. The varied response among such species, he notes, will also complicate the task of modelling the effects of the climate on plants, and how plants will, in turn, affect climate.