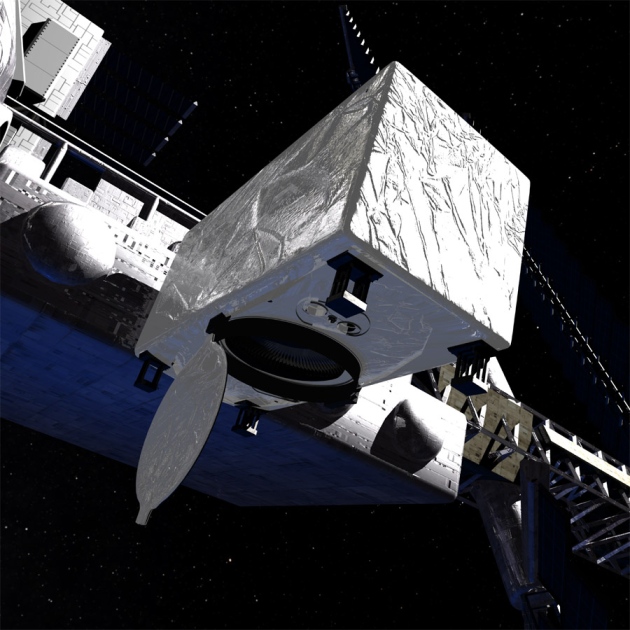 An instrument to monitor the clouds and aerosol particles in Earth's atmosphere  will hang off the International Space Station.

Atmospheric scientists are about to get a new eye in the sky. NASA plans to launch an instrument to monitor clouds and aerosols to the International Space Station (ISS) on 16 December.

By early 2015, laser sensors aboard the CATS instrument will begin collecting data that scientists hope will improve their atmosphere and climate simulations.

Clouds and the fine particles known as aerosols, which reflect and absorb energy from the Sun, have long vexed climate scientists — adding major uncertainties to their projections of future conditions. Satellites have helped researchers start to make progress by providing continuous global observations of particles such as dust and soot, and distinguishing between ice and water molecules in clouds, as these have different effects on temperature.

The agency also hopes that CATS will help to convince sceptics that the ISS can be a platform for important science and serve as a test bed for technology to be included on future satellites. At US$15 million, CATS costs less than one-tenth as much as a free-flying instrument.

To separate human influence on clouds from that of natural variations such as the El Niño cycle, scientists say that they need at least two or three decades of continuous satellite observation. CALIPSO alone will not provide that record — dwindling fuel supplies will render the satellite incapable of maintaining its current orbit by 2018.

Scientists had hoped that data from CALIPSO would overlap with that from EarthCARE, a joint mission of the European Space Agency and the Japan Aerospace Exploration Agency that will include a major cloud- and aerosol-monitoring probe. But that mission, originally slated to launch in 2015, has been pushed back to 2018, which could leave a damaging hole in the data record.

CATS, which is designed to operate for up to three years, could help to fill that gap, McGill says. But it is not a perfect replacement, as the instrument’s perch on the space station will also limit its view.

CALIPSO’s Sun-synchronous orbit takes it over the poles, where it measures high-latitude clouds that are important to global climate. It also travels in a cluster of satellites called the A-Train, which includes an instrument called CloudSat, whose radar beams penetrate thick clouds, providing more data.

Unlike the A-Train satellites, CATS will see only clouds between the latitudes of 51.6 degrees north and south. Still, climate modellers say that the new instrument will be useful. Thanks to ISS’s variable orbit, CATS will, over the course of about two months, observe every place between those latitudes at every time of day. The A-Train, by contrast, passes over the same spot every day at the same time.

“Getting a full daily cycle for deep tropical clouds will be a fantastic new data set,” says Andrew Gettelman, an atmospheric scientist at the National Center for Atmospheric Research in Boulder, Colorado.

CATS will also test laser technology designed to determine aerosol and cloud particle sizes more precisely. These data should allow researchers to identify the particles inside clouds with more certainty, says McGill. Until now, scientists have had to combine data from laser-based lidar measurements with various assumptions to guess at particle type.

But CATS will probably not be a game changer, says Graeme Stephens, an atmospheric scientist at NASA’s Jet Propulsion Laboratory in Pasadena, California, and head of the CloudSat mission. Data from the instrument will be hard to synch up with observations from A-train instruments, given their vastly different orbits.