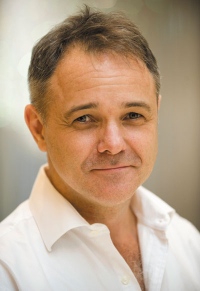 From his base in Vietnam, Jeremy Farrar has spent the past 17 years on the front line of the battle with infectious diseases, from dengue and typhoid to severe acute respiratory syndrome (SARS) and now H7N9 avian influenza. The British clinician has led the Oxford University Clinical Research Unit in Ho Chi Minh City as it has grown from a dozen people to around 200 researchers supporting public-health efforts in Vietnam, Nepal and Indonesia.

Now, Farrar is stepping up to lead the UK institution that paid for much of his work: the Wellcome Trust, one of the world’s largest charities funding biomedical research. Colleagues and public-health leaders say that the trust, which last year spent £746 million (US$1.15 billion), has made an excellent choice — and wonder whether it signals an even greater focus on funding research in developing countries.

“He’s massively driven, and a great visionary. He’s invested his career in doing the research where the problem lies; he believes tropical medicine should be done in the tropics,” says Bob Snow, one of Farrar’s collaborators, who works on malaria and public health in Nairobi.

Farrar moved to Vietnam in 1996, when the Wellcome Trust was boosting investment in disease-ridden countries in Africa and southeast Asia. He saw the SARS outbreak in 2003 at close quarters — his friend, Carlo Urbani, died of the virus while working for the World Health Organization (WHO) in Hanoi. Then came a surge in H5N1 avian flu, which hit Vietnam hard. “It was a tense time for everyone,” says Cameron Simmons, a dengue expert who works with Farrar; clinicians were treating patients and trying to explain the crisis. Through all of this, Farrar’s leadership and ability to build trust between people was evident, says Simmons.

“Jeremy’s very much a shrewd team player,” says Colin Blakemore, a neuroscientist at the University of Oxford, UK, and former head of Britain’s Medical Research Council. Farrar has brokered funding from several sources, and his centre’s work on flu required negotiations with countries such as China to obtain samples. Those skills will serve him well when he moves to the Wellcome Trust in October.

For the past decade, Farrar has been migrating to a more strategic role, Snow says, serving on WHO advisory boards and pushing for a greater focus on flu surveillance and on capacity-building in the developing world.

“I believe that we have to bring some of the huge investment by the developed world in genomics, technology and training to affected countries in Asia and elsewhere,” Farrar wrote last year (Nature 483, 534–535; 2012).

Farrar would not divulge whether his vision of international public-health strategy would affect the trust’s priorities: “I have too much to do on H7N9 and hand, foot and mouth disease to talk about that,” he says. But Snow says that researchers are hopeful. Since 2008, the charity — under its previous director Mark Walport, now the UK government’s chief scientific adviser — has increased its spending outside the United Kingdom from 14% to 22%, expanding support for programmes in India and sub-Saharan Africa in particular. It has also doubled the share of its cash it gives to translational research, from 6% to 12%. David Heymann, chairman of the advisory board for Public Health England, says that Farrar is likely to encourage those trends.

“It wasn’t an easy decision for him to give up the science,” says epidemiologist Simon Hay, a collaborator at the University of Oxford, “but there’s a responsibility for people that have been advocating in public health to step up when these positions come up.” Moreover, the Vietnam unit can now operate without Farrar.

“There will be tears from our end and from our Vietnamese partners. The trust is very lucky to be getting Jeremy — he’s a remarkable leader,” says Simmons.