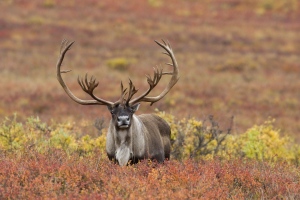 As the planet warms and tundra shifts poleward, this Alaskan reindeer (Rangifer tarandus) will have to work harder to keep up.

Earth's regional climate zones will shift more quickly in response to warming as the globe grows hotter in coming decades, according to a study published online in Nature Climate Change on Sunday1. This is likely to make it harder for species to cope, raising the risk of extinction.

“If these changes are happening faster and faster, it means that the ecosystems have less and less time to adapt,” says Irina Mahlstein, a postdoctoral researcher at the Cooperative Institute for Research in Environmental Sciences at the University of Colorado Boulder, who led the study.

She and her team sought to determine whether ecosystems might undergo “runaway climate-zone shifts” above a certain temperature threshold, says John Daniel, an atmospheric scientist with the US National Oceanic and Atmospheric Administration in Boulder and a co-author of the study. Because many governments have sought to limit warming to less than 2 °C — a goal that seems increasingly out of reach — the study’s authors decided to examine how warming beyond that target might affect the world’s climate zones. But they did not find evidence for a critical threshold; instead, global temperature and the pace of climate shift appeared to increase in lock-step.

The team combined data from 13 model simulations using global mean temperature and precipitation to estimate past and future regional climate shifts between 1900 and 2098. Under one modelling scenario, the pace of climate-zone change nearly doubles by the end of this century and about one-fifth of Earth’s land area undergoes a climate shift. The study predicts that polar climates will shrink whereas arid regions will expand. Large swathes of Earth will switch from cool summers to hotter summers. And at low latitudes, mountainous regions will shift climate zones earlier than nearby low-altitude areas.

Previous studies have also examined how ecosystems will shift in a warming world. Research published in Nature in 20092 projected how quickly various types of habitat, such as deserts or tropical regions, might be affected by climate change, and thus how quickly species will have to migrate to keep pace with their preferred habitat. But the new study is the first use climate zones, defined by temperature and precipitation, to analyse the pace of change.

Alan Townsend, an ecologist at the University of Colorado Boulder, who was not involved with the research, says that it does not specifically address how the surrounding geography will affect species’ responses to local climate change, an important limitation. “As climate changes, you’ve got to figure out somewhere else to go, but the problem involves both how fast you have to do that and how far you have to go,” he says.

But Townsend agrees that faster shifts in regional climate will present big challenges for conservation. “By definition, that’s going to put greater stress on the species that live there, because they’re going to have less time to figure out a new way to make a living.”