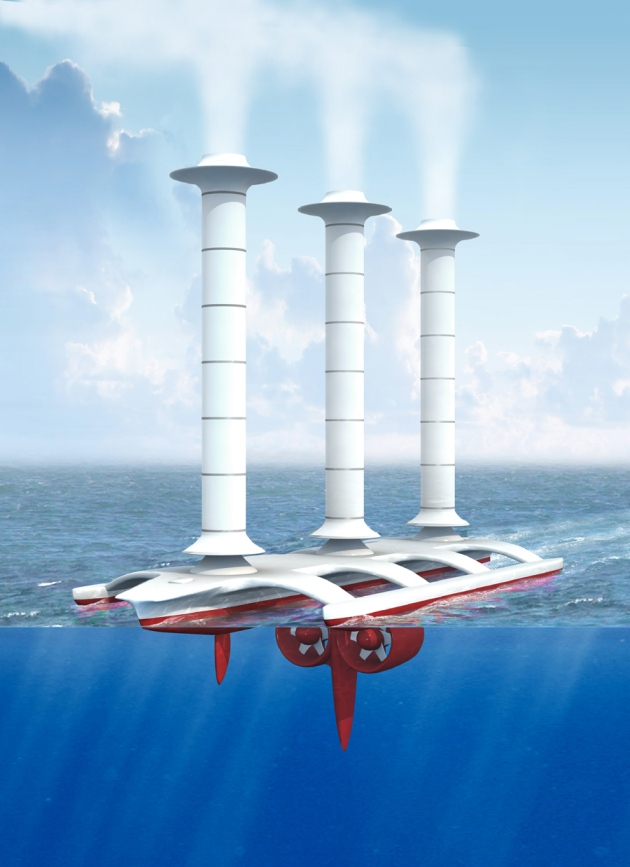 An untested device that sprays sea water into the atmosphere is one futuristic idea for cooling the planet.

On 1 December, the United Nations kicked off a summit in Lima that aims to forge a global deal to reduce greenhouse-gas emissions. Now, representatives of dozens of scientific societies are gathering in Washington DC to thrash out a set of principles for researching highly controversial technologies known as geoengineering. The methods offer ways to cool the planet should political approaches fail.

“There are a number of risks and unknowns,” says Paul Bertsch, deputy director of the Land and Water Flagship at the Commonwealth Scientific and Industrial Research Organisation in Brisbane, Australia, and past chair of the Council of Scientific Society Presidents, which is convening the geoengineering meeting. “So we urgently need to develop and implement a coordinated research plan that begins to address these in a deliberate way.”

Some ideas, such as injecting carbon dioxide into rocks or the depths of the ocean, are already being tested. Others are more futuristic: spraying sea water into the air to brighten clouds and reflect more sunlight back into space; adding sulphate particles to the upper atmosphere to mimic the natural cooling effect of volcanic ash; and even placing giant mirrors into orbit to reflect sunlight before it reaches Earth.

Not one, however, has garnered much enthusiasm in environmental or political spheres. The idea of tinkering with the planet smacks of scientific hubris, and many are worried about unintended consequences. Climate scientists are concerned, for example, that adding sulphate to the stratosphere might reduce rainfall in some regions and worsen ozone depletion.

On 2–3 December, leaders of societies representing some 1.4 million scientists, engineers and educators will work out what research is and is not acceptable given the possible social, ecological and economic effects of climate engineering. A conference held in 2010 in Asilomar, California, failed to produce clear guidelines (see Nature 464, 656; 2010).

Most scientists say that it is too early to consider large-scale trials, especially for solar-radiation management, because the techniques have not yet been adequately tested in controlled settings. However, many maintain that geoengineering should not be ruled out as a last resort to prevent the worst effects of global warming.

“The question is when, if at all, should we start doing outdoor experiments?” says Matthew Watson, a volcanologist at the University of Bristol, UK, who is overseeing a project to determine how the deliberate spreading of sun-blocking particles might alter atmospheric chemistry (see ‘UK experiments’). “I don’t particularly ‘like’ geoengineering, but I’m afraid we do need to think about controlled field trials.”

Matthew Watson, a volcanologist at the University of Bristol, presented the results of the Stratospheric Particle Injection for Climate Engineering (SPICE) project. SPICE investigated whether spraying particles into the atmosphere could reflect sunlight and cool the planet, offsetting global warming. A planned test of some of the technology was abandoned in 2012 when conflict-of-interest issues emerged over a patent application for the system. But Watson says that SPICE produced useful insights, such as how a large-scale project might alter the Sahel region in Africa.

Piers Forster at the University of Leeds, who led the Integrated Assessment of Geoengineering Proposals project, said that his team’s computer modelling showed that several techniques to manage the Sun’s radiation would produce damaging changes in rainfall that could affect 25–65% of the world’s population.

Watson, Forster and the University of Oxford’s Steve Rayner, who is leader of a third effort called the Climate Geoengineering Governance project, agreed that their work created many questions.

A method that has already been tested — ocean fertilization — provides a particularly thorny case study. The idea was to boost ocean uptake of carbon dioxide by pouring iron into the sea to stimulate the growth of algal blooms. When the algae die, the captured carbon sinks to the ocean floor, where it may remain locked away for centuries.

But the approach came under fire when eco-entrepreneurs smelled business opportunities. Plans by companies in the United States and Australia to fertilize large swathes of ocean to generate carbon credits that could be sold on greenhouse-gas-emissions markets were headed off by a 2008 amendment to the London Convention, an international treaty that governs ocean pollution.

Together with a resolution made under the United Nations Convention on Biological Diversity a few months earlier, the amendment made it difficult to conduct trials of ocean fertilization. In 2009, for example, an international research cruise was stopped en route to the Southern Ocean over fears that an iron-stimulated algal bloom the team had planned to encourage there might violate international law.

Meanwhile, another attempt, by an amateur scientist in 2012 off the coast of British Columbia, led to an international storm of protest and prompted heated discussions in the Canadian government over the legality of the experiment.

Such unresolved governance issues mean that little funding is available for further studies. “We’re caught up in politics,” says Ken Buesseler, an ocean scientist at Woods Hole Oceanographic Institution in Massachusetts. “You’d absolutely like to avoid rogue experiments that don’t generate proper science. But there is every reason to pursue real science in the field in an open and responsible way.”

Meeting discussions are aimed at creating comprehensive guidelines for the safe conduct of field experiments.

Neither ocean fertilization nor any other single activity will solve the global warming problem, cautions Anya Waite of the Alfred Wegener Institute in Bremerhaven, Germany, who represents the fields of oceanography and limnology at this week’s meeting. “But limited ocean-fertilization experiments are telling us a lot about how biological processes in the ocean control climate. In terms of new regulations, they should be the first cab off the ranks.”

This story incorrectly stated that discussions at the December meeting would feed into a report that the US National Academies intends to release early next year. That report is already under peer review. The text has now been corrected.