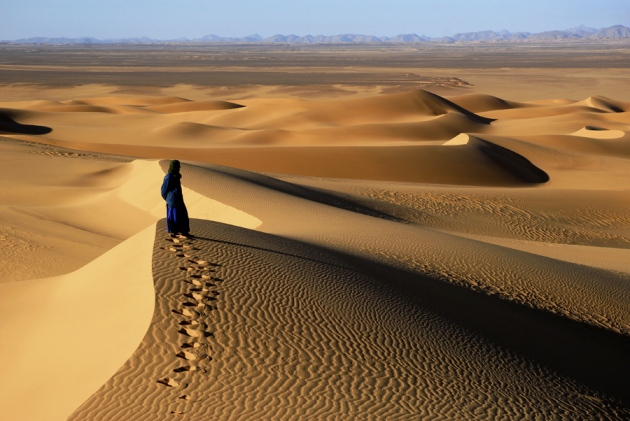 The Sahara Desert may be much older than geologists thought.

The desertification of northern Africa may have started 7 million years ago, or more than twice as long ago as earlier estimates of the Sahara's age, climate simulations suggest1. The findings also hint that this shift in climate would have been triggered by the gradual shrinking of the Tethys Sea, the predecessor of today’s Mediterranean.

The sands of the Sahara may seem timeless, but most geological data suggests that the world's largest non-polar desert formed between 2 million and 3 million years ago, about the same time as cycles of ice ages began plaguing the Northern Hemisphere.

Still, scientists have unearthed tantalizing clues that the Sahara may be much older than 3 million years old, says Zhongshi Zhang, a palaeoclimatologist at the Bjerknes Centre for Climate Research in Bergen, Norway and a a co-author of the latest study, published on 17 September in Nature1. Almost a decade ago, he notes, one team reported2 evidence of widespread dune deposits estimated to be 7 million years old in northern Chad.

Other analyses, including of long-term variations in the amounts of dust and pollen in sediments drilled from seafloors off northern Africa3, chronicle extended dry spells in the region starting about 8 million years ago.

But it has been unclear what might have triggered the aridification, says Zhang. There were no major episodes of mountain formation that might have influenced climate in the region, he notes. Nor do his team's climate simulations suggest that long-term changes in Earth’s orbit or atmospheric concentrations of carbon dioxide are to blame.

Instead, the analyses hint that a gradual rearrangement of land masses — and in particular, the shrinking of the ancient Tethys Sea as the African tectonic plate moved north relative to the Eurasian plate — prompted a shift in weather patterns.

The simulations showed that the shrinking of the Tethys Sea — along with the uplift of the Arabian peninsula, which replaced a broad swath of ocean off northeastern Africa between 7 million and 11 million years ago — weakened the African summer monsoon. When those westerly winds waned, the flow of moisture from the tropical Atlantic that previously swept across northern Africa shifted south. Before the rise of the Arabian peninsula, northern Africa had a moister, semi-arid climate, the researchers note.

Stefan Kröpelin, a geologist at the University of Cologne in Germany, says that the model is interesting but that it is mostly “numerical speculation based on almost non-existent geological evidence”. In particular, he adds, little is known about the size and geology of the Tethys Sea. “Nothing you can find in the Sahara is older than 500,000 years, and in terms of Saharan climate even our knowledge of the past 10,000 is full of gaps,” he says.

Northern Africa probably saw a succession of alternating drier and wetter phases in the distant geological past, says Kröpelin. But all available evidence suggests that the Sahara as we know it did not exist before the glaciation of the Northern Hemisphere began, around 3 million years ago, he says.

Mathieu Schuster, a sedimentologist at the University of Strasbourg in France and a co-author of the latest work, disagrees. Although it is true that too little is known about the ancient geology of the region, he says, the 2006 Chad study (which Schuster also co-authored) as well as the ones that reported increases in dust an pollen from sediment, contained “strong pieces of evidence to support our new findings”.