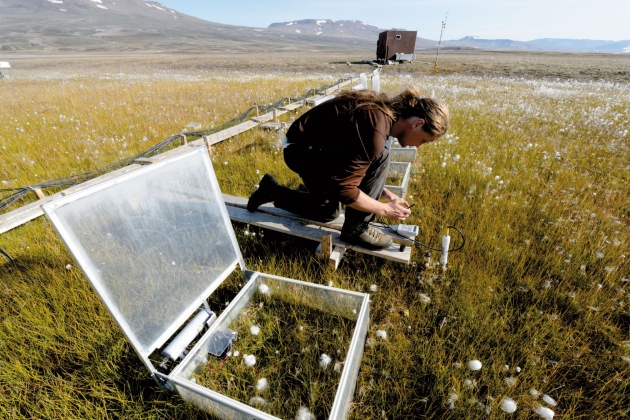 A fieldworker at the methane-measuring chambers in Greenland's Zackenberg valley in 2013.

As a PhD student in 1991, I placed my first methane-emissions measurement chamber on the Alaskan tundra. My goal was to reduce uncertainties in the estimates of greenhouse-gas emissions from the Arctic. The first assessment report from the Intergovernmental Panel on Climate Change (IPCC) had been released, and methane emissions from wetlands in the region had been identified as a 'wild card' in the climate system. They still are.

I followed the best practices at the time. My gas samples were handled according to protocols and calibrated against 'god bottles' of gases with precisely known concentrations — part of the US National Oceanic and Atmospheric Administration's network of standards for atmospheric trace gas analysis. Other scientists carried out similarly careful work. More than 20 years on, Arctic methane emissions remain just as uncertain. 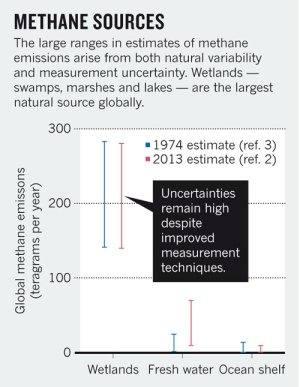 The reason is natural variability. Methane fluxes can vary by a factor of two or more from year to year, which is as large as the measurement uncertainties that we once set out to reduce1. So the range for global wetland methane emissions recognized today2 (140–280 teragrams of methane per year; see 'Methane sources') is the same as it was in 1974, when the first global methane budget was published3.

Methane is a powerful greenhouse gas — it is some 25 times stronger per tonne than carbon dioxide in warming the climate. So not knowing why it varies in the atmosphere is a serious problem. Worse, tipping points in the climate system that cause sudden surges in methane release from the Arctic would have a substantial effect on global temperatures.

To learn what governs this variability, we need to expand ground-based networks across the polar region for monitoring carbon release from ecosystems and its exchange with the atmosphere. Attention should focus on the most prolific sources in wetlands, lakes and coastal areas.

Wetlands, many of which are at high latitudes, are the main global source of naturally occurring methane in the atmosphere. The gas is also produced in the sediments of lakes and in coastal-shelf areas such as the Laptev Sea, including highly uncertain releases from storage in methane hydrates in deep sediments.

There are many unknowns. How thawing soils release methane is poorly understood. The biogeochemistry of the landscapes that result when permafrost thaws is not known. We cannot even predict why some areas become wetter as permafrost thaws, whereas others become drier.

Depending on factors including temperature, snow duration and soil moisture conditions, methane emissions from permafrost wetlands can vary by factors of 2–4 from year to year4. This variability is clear in atmospheric measurements of the gas, but a lack of ground-based data makes it hard to locate the methane sources responsible. 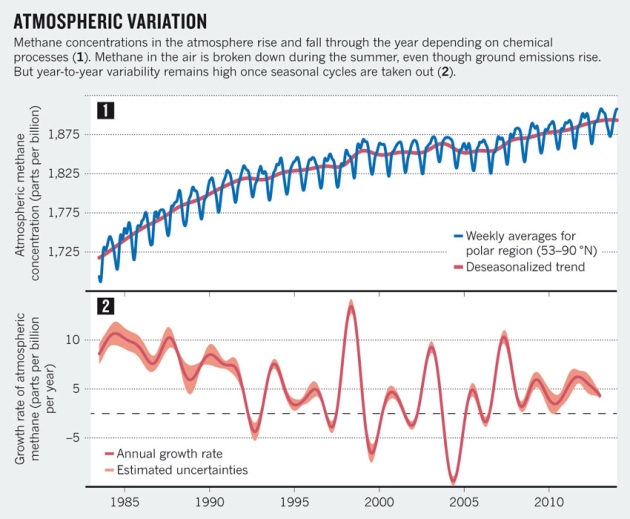 In 2007, for example, changes in biogenic (probably wetland) sources were implicated in a sudden rise in atmospheric concentrations of methane in the Arctic after years of stagnation, on the basis of the gas's isotopic composition, among other evidence (see 'Atmospheric variation'). Suspected sources such as the West Siberian lowlands could not be pinpointed because there were no local flux measurements4. The lack of continuous and geographically distributed flux monitoring makes it difficult to estimate even the likelihood of particular sources being responsible.

Methane monitoring in the Arctic is expensive. It requires sophisticated equipment — such as laser spectrometers — and demanding logistics, including power supplies for remote stations. Research projects, therefore, typically focus on one site, and run for only a year or two. Longer-term monitoring programmes, which may document climate, hydrology, phenology and population dynamics of birds and mammals, rarely measure carbon fluxes, because it is technically challenging. One that does is the Greenland Ecosystem Monitoring programme, which started at the Zackenberg Research Station. It has recorded substantial methane-flux variations for almost a decade in northeast Greenland.

Such multi-year studies show that, although there is some connection between the amounts of methane released from one year to the next, accurate forecasting is difficult5. The state of the ecosystem at the point that it freezes in the autumn affects emission patterns the following year. Such circumstantial factors could induce a three- to fourfold difference in emissions between years5. They also highlight the importance of extending monitoring beyond the growing period into the frozen season, in both spring and autumn. The assumption that ecosystems become inactive when freezing starts has been proved utterly wrong. 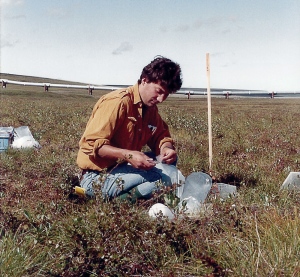 Highly productive methane 'hotspots' have been identified6, 7. Many of them are sporadically active. Storms trigger emissions in the East Siberian Sea Shelf by ventilating surface waters6. Shallow lakes formed from thawing permafrost can belch methane from decomposing organic deposits, of which there are huge amounts in the Arctic7. When added to the wetlands emissions, these potentially important sources reach a total level of emissions that does not match up with the atmospheric observations.

Satellites' sensors might catch these events, but interpretations from space are difficult because surface signals and those from higher altitudes can be mixed. Instrumented aircraft are increasingly used to map methane across large areas, such as the Laptev Sea (where estimates of methane emissions have increased6) and from thermokarst lakes7, but these flights are expensive — around €10 million (US$14 million) for one summer campaign. Drones and ultralight or medium-range aircraft are cheaper and are being used more for visits to particular sites.

Much of the uncertainty in Arctic methane stems from coastal processes. Ancient tundra plains flooded during the Holocene epoch (from 11,700 years ago to the present), such as the East Siberian Sea Shelf, are some of the most productive areas. Coasts are mixing zones, in which the organic carbon released from thawing permafrost is transported by rivers and meets thawed material from the shoreline sediments of the Arctic Ocean8. Our understanding of what happens along them is limited. Yet in a warming climate, coastal emissions could be substantial because they emanate from huge organic reservoirs on land and beneath the sea.

To understand the relationship between Arctic methane fluxes and climate change, the following are needed.

First, existing and planned ecosystem-monitoring networks in the region need to incorporate continuous CO2 and methane-flux measurements on the ground, preferably decades' worth. Modelling of atmospheric and ecosystem carbon cycles should guide the search for locations where the most important variability might be observed.

Extensions of the Arctic monitoring infrastructure that will substantially increase geographic coverage are under way. The challenge is coordinating them, using similar equipment, to support continuous methane-emissions monitoring that is consistent over the whole polar region.

“A closer integration of terrestrial and coastal marine research is needed.”

Europe's Integrated Carbon Observing System (ICOS) will link many sites across Europe to measure ecosystem and atmospheric carbon fluxes over decades. Only a few sites, including some already operating in Sweden and Finland, will be in the sub-Arctic. Better northern coverage will come from the European Union's International Network for Terrestrial Research and Monitoring in the Arctic (INTERACT) programme, which includes a circumpolar network that will promote and facilitate access to more than 50 research platforms in Europe, Siberia and North America. The US National Ecological Observatory Network is pursuing similar goals in the Arctic.

Together, these programmes hold great promise, as long as international protocols can be agreed on so that the data taken at different stations are comparable. The INTERACT and ICOS networks, which involve several countries and a wide range of infrastructure platforms in land-based, freshwater and near-coastal environments, are a good venue for developing such standards. 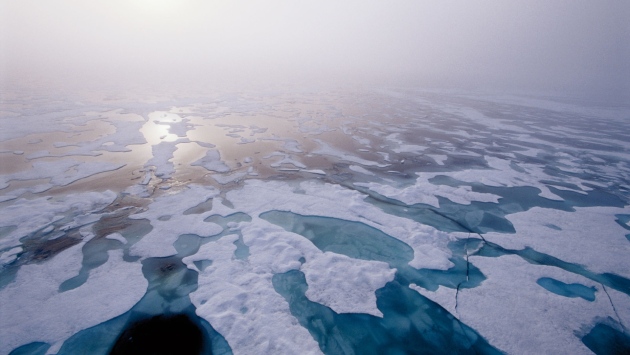 Civil and military collaborations should also be sought for monitoring methane point sources. Countries in the Arctic Council together spend more than US$9 billion per year on military activities in the region, which is of increasing geopolitical and commercial interest owing to the retreat of sea ice (see go.nature.com/kqsga3). A small share of the funds could support scientific research that aligns with military interests, such as the factors affecting Arctic thaw. Ships, drones, aircraft, satellites and methane-measurement platforms on land could be shared, for instance. The Canadian Coast Guard and Danish navy fleets already collaborate with public scientific institutions in the Arctic.

A closer integration of terrestrial and coastal marine research is needed to understand the most rapidly varying methane sources. This should include, for example, the influence of sea-ice dynamics on ecosystem functioning on land in terms of the carbon cycle and methane emissions9. Joint funding programmes are sorely needed. One successful model is the Nordic Top-Level Research Initiative, which supports a centre of excellence, DEFROST, and brings together terrestrial and marine researchers as well as climate modellers. A forthcoming report by the Arctic Council's Arctic Monitoring and Assessment Programme expert group on methane, scheduled for publication in 2015, should lay out directions for work in coming years.

It is time for all those concerned with the science of climate change in the Arctic to look beyond disciplinary borders to gain a better understanding of how methane influences the global climate.