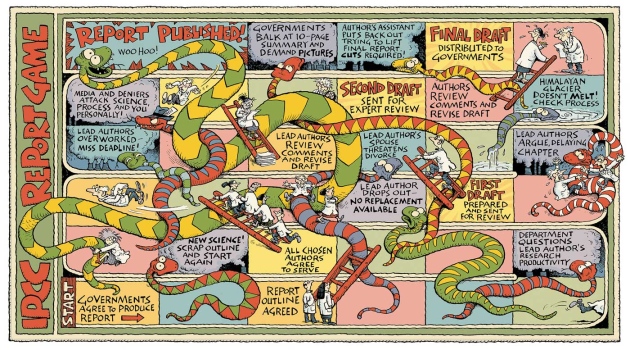 Although the Intergovernmental Panel on Climate Change (IPCC) has gained a justified reputation for producing the most up-to-date, comprehensive and authoritative statements of our knowledge of climate change, this has come at a cost to the scientific community. On 13 April, the IPCC releases the last part of its Fifth Assessment Report. Each report has become longer — the latest round-up of scientific evidence is nearly four times the size of the first — and is taking more time and effort to prepare, placing a greater imposition on those involved.

Looking ahead to its sixth assessment, the IPCC has formed a task group to improve its operation and products. I believe that the panel should streamline the process and ease the pressure on the many hundreds of scientists who write, review and produce the assessments.

IPCC work can ruin lives, as a former lead author told me when I was head of an IPCC Technical Support Unit (TSU) working on the Third Assessment Report1. Over three years, he had devoted months of his own time to his chapter, because his university would not reduce his workload. He had haggled over details with other authors, responded to hundreds of reviewers’ comments (twice) and defended the account against distortion by governments. When the report came out he was attacked by deniers and the media, causing him distress. His marriage nearly ended. But when I asked him if he would work on the next report, he said: “Of course I will do it again, it is the most important thing I have ever done.”

The IPCC reports have value for policy-making and should be continued. Although there is much that we still do not understand about the climate system, as the research has progressed, each report expresses increasing confidence in the basic science. The risks of allowing greenhouse-gas emissions to rise are clear.

But the IPCC process must be improved. Future assessments need to be shorter, the writing process streamlined, and lead authors should be compensated for their efforts.

Here are seven lessons learned, often the hard way, based on my involvement in the third, fourth2 and fifth3 assessments, and on discussions with colleagues.

Publish shorter, less-frequent reports. With each update, IPCC reports have stretched — from 410 pages for the first Working Group I (WGI) report to 881 pages by the third and 1,535 by the fifth. There is more research to assess, but new science builds on old, so it is not necessary to go back to the beginning to build a comprehensive account. Limiting reports to 1,000 pages or fewer would save time, reduce workloads and make the reports more readable and focused.

The IPCC has produced its comprehensive reports every six years or so. From a scientific perspective, you could get the same benefit at lower cost and effort by updating them every ten years. Emerging and fast-moving areas of science could be covered in the interim using short, targeted reports.

Implementing these two changes would also enable the IPCC to maintain its small, efficient administrative structure. The panel’s reports are prepared by hundreds of scientists in three working groups (WGI reports on the physical-science basis, WGII on the impacts, adaptation and vulnerability, and WGIII on the mitigation of climate change). The process is supported by a small secretariat in Geneva, Switzerland, and four TSUs (one for each working group and one Task Force on National Greenhouse Gas Inventories). Each TSU consists of just five to seven people, and it should stay that way.

Consult widely at the start. The outline for the Fifth Assessment Report was developed at a scoping meeting in July 2009 of scientists from across all three working groups, rather than by the co-chairs and the TSU, as for previous reports. This approach should be continued and extended, for example by consulting lead authors of past reports. By letting everyone have a say early in the process, we can improve consistency between the three reports, for example in how to treat uncertainties, and identify important new areas of focus, such as the contribution of ice sheets to sea-level rise. Although it is impossible to produce an outline that everyone agrees on, it is vital that everyone has an opportunity to express their opinion and understands the logic behind the report structure.

Recognize the skills lead authors need. The selection of lead authors is probably the most crucial step in the process. Lead authors oversee the drafting of the chapters and their review, first by experts, then by experts and governments. It is a monumental task. Each report can draw more than 50,000 comments, from the insightful to the stupid. Lead authors must consider each one, amend their draft to take into account valid comments and document responses to all those received.

The IPCC requires that selected authors reflect the “range of scientific, technical and socio-economic views and expertise; geographical representation ; … previous experience in the IPCC; [and] gender balance”. This mixture is difficult to achieve. If one lead author pulls out, it can be hard to find a replacement and it might affect the selection of other authors to redress the balance.

But lead authors need other subtle skills, some of which are rare in science. They need to be diligent, careful, balanced and fair, and able to take criticism while remaining open to changing their views in the face of new evidence. They must be amenable, dedicated enough to tolerate the tortuous process and be able to deliver on time.

Lead authors need to work to absolute deadlines, which are dictated by governments. The IPCC does not pay authors, who often work on reports in their own time, so a TSU has no means to force an author to deliver. This underlies the value of retaining some lead authors who have had previous experience in the process, and who can impress on their colleagues the importance of meeting deadlines.

Because the lead-author teams work together for years, they have to get along. When I was helping to select lead authors for the Third Assessment Report, I invited two prominent scientists to take part. Both agreed to participate — on the condition that the other person was not a lead author. Only by offering to act as a neutral arbiter in any disputes was I able to get both on board. But it is best to avoid such a situation.

Summarize with better graphics. Report authors need to develop a short summary for policy-makers and a longer technical summary. It is extremely challenging to summarize often more than 1,000 pages of dense science into just 10 or 20, let alone getting all the scientists, reviewers and governments to agree on the wording. But, for busy readers, even ten pages is too long. So a handful of key findings need to be pulled out. It is worth spending time to get these statements right, because for many people they form the primary focus. The summary for policy-makers must contain information that is relevant to them while staying faithful to the science, and should never be policy prescriptive.

A picture is worth a thousand words. Future reports would benefit from improved infographics. The reports are communication documents as much as they are scientific ones, so lead author teams should have access to professional graphics support to present their work most effectively.

Never compromise on the science. The final step in the IPCC process is the Plenary session, or meeting of governments, at which the summary for policy-makers is agreed on word-by-word. The governments can request changes to make the summary clearer or to include things that are important for policy. They cannot change the science. Lead authors are present to ensure that the summary accurately reflects the research. Such situations can be intimidating, but in my experience the science has never been compromised.

The scientists should listen, too, because government input can improve the summaries. For example, in one meeting I attended, the policy-makers rightly asked what the scientists meant by a “significant fraction” of something. Did it mean 1%, 10% or 50%, and by what criteria was it significant? We had to form a small subgroup to resolve the issue.

“Even the most trivial sentences can cause endless debate.”

And even the most trivial sentences can cause endless debate. In the WGI contribution to the Third Assessment Report, we ran into a problem on the second sentence, which read: “Many hundreds of scientists from many countries participated in its preparation and review.” For several hours, delegates debated what was meant by “many hundreds” and “many countries”. In the end, the problem was resolved only by adding the numbers in a footnote.

I learned an important lesson in that session — patience is crucial. As the hours went by, I grew desperate, knowing that we had difficult points of science left to discuss. I asked the group co-chair, John Houghton, to try to conclude the discussion. He explained that if he cut it short he would lose the trust of the governments that still wanted to speak. If he let them all speak now, he said, they would give him more leniency later when he had to take a hard line. And so it proved.

Resist more complexity. The IPCC has strict rules and procedures, but with something so large and complex, mistakes are inevitable — although surprisingly rare. This occurred most notably in 2007 when errors were identified in the WGII contribution to the Fourth Assessment Report4, which stated that there was a high likelihood that the Himalayan glaciers might disappear by 2035.

The question was not of whether there was error — there was — but whether this error was symptomatic of a flawed process, undermining the conclusions of all the reports. In my view, such an error does not nullify other conclusions, owing to the multiple lines of evidence presented, and I have never been involved in such a careful and rigorous process. So, although some may not like the revelations in the IPCC reports, it is wrong to shoot the messenger.

Following this incident, the InterAcademy Council reviewed IPCC procedures and made recommendations, including more checks and balances, many of which the IPCC adopted. However, adding complexity adds to the workloads of already overstretched scientists and will never eliminate errors completely. I believe that the process is already rigorous enough and that adding further complexity should be resisted.

Compensate lead authors for their time. Although practices vary between countries and institutions, there is no system of compensation for IPCC lead authors, other than for travel expenses. The authors devote significant amounts of time, often with no reduction in workload from their main employers. This limits the time that they can spend on the reports.

Lead authors should not profit from being involved in the IPCC, because this could be perceived as a conflict of interest. But governments should offer to cover the costs to their host institutions of teaching relief, or of employing a research assistant to ease their workload, allowing them to maintain scientific output. Although this would increase the cost of producing the reports, the extra expense would be trivial compared with the benefit of having the best possible assessment of climate change.

So why should scientists take part in IPCC assessment reports? Because the future of the world will be severely affected by climate change and we have a responsibility to make the risks known. The IPCC remains the most effective way to do that.