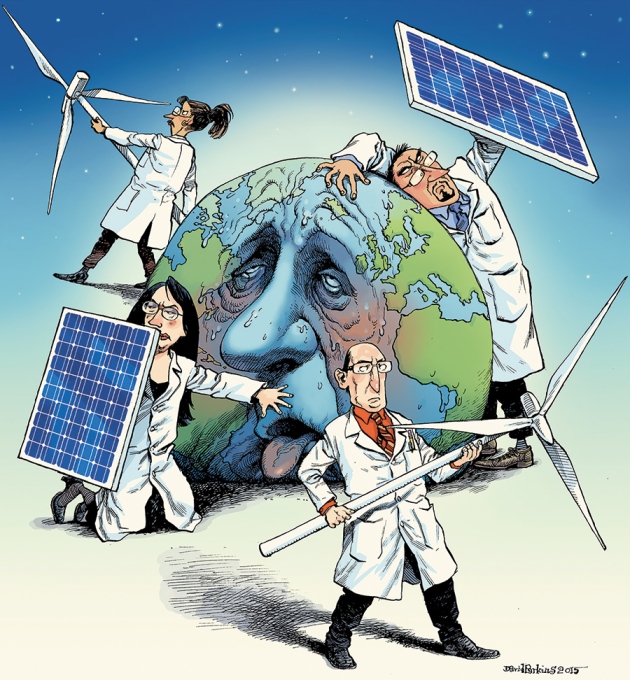 There are many threats to democracy in the modern era. Not least is the risk posed by the widespread public feeling that politicians are not listening. Such discontent can be seen in the political far right: the Tea Party movement in the United States, the UK Independence Party, the Pegida (Patriotic Europeans Against the Islamization of the West) demonstrators in Germany, and the National Front in France.

More surprisingly, a similar impatience with the political elite is now also present in the scientific community. Researchers are increasingly concerned that no one is listening to their diagnosis of the dangers of human-induced climate change and its long-lasting consequences, despite the robust scientific consensus. As governments continue to fail to take appropriate political action, democracy begins to look to some like an inconvenient form of governance. There is a tendency to want to take decisions out of the hands of politicians and the public, and, given the 'exceptional circumstances', put the decisions into the hands of scientists themselves.

This scientific disenchantment with democracy has slipped under the radar of many social scientists and commentators. Attention is urgently needed: the solution to the intractable 'wicked problem' of global warming is to enhance democracy, not jettison it.

Democratic nations seem to have failed us in the climate arena so far. The past decade's climate summits in Copenhagen, Cancun, Durban and Warsaw were political washouts. Expectations for the next meeting in Paris this December are low.

Academics increasingly point to democracy as a reason for failure. NASA climate researcher James Hansen was quoted in 2009 in The Guardian as saying: “the democratic process doesn't quite seem to be working”1. In a special issue of the journal Environmental Politics in 2010, political scientist Mark Beeson argued2 that forms of 'good' authoritarianism “may become not only justifiable, but essential for the survival of humanity in anything approaching a civilised form”. The title of an opinion piece published earlier this year in The Conversation, an online magazine funded by universities, sums up the issue: 'Hidden crisis of liberal democracy creates climate change paralysis' (see go.nature.com/pqgysr).

The depiction of contemporary democracies as ill-equipped to deal with climate change comes from a range of considerations. These include a deep-seated pessimism about the psychological make-up of humans; the disinclination of people to mobilize on issues that seem far removed; and the presumed lack of intellectual competence of people to grasp complex issues. On top of these there is the presumed scientific illiteracy of most politicians and the electorate; the inability of governments locked into short-term voting cycles to address long-term problems; the influence of vested interests on political agendas; the addiction to fossil fuels; and the feeling among the climate-science community that its message falls on the deaf ears of politicians.

“It is dangerous to blindly believe that science and scientists alone can tell us what to do.”

Such views can be heard from the highest ranks of climate science. Hans Joachim Schellnhuber, founding director of the Potsdam Institute for Climate Impact Research and chair of the German Advisory Council on Global Change, said of the inaction in a 2011 interview with German newspaper Der Spiegel: “comfort and ignorance are the biggest flaws of human character. This is a potentially deadly mix”.

What, then, is the alternative? The solution hinted at by many people leans towards a technocracy, in which decisions are made by those with technical knowledge. This can be seen in a shift in the statements of some co-authors of Intergovernmental Panel on Climate Change reports, who are moving away from a purely advisory role towards policy prescription (see, for example, ref. 3).

We must be careful what we wish for. Nations that have followed the path of 'authoritarian modernization', such as China and Russia, cannot claim to have a record of environmental accomplishments. In the past two or three years, China's system has made it a global leader in renewables (it accounts for more than one-quarter of the planet's investment in such energies4). Despite this, it is struggling to meet ambitious environmental targets and will continue to lead the world for some time in greenhouse-gas emissions. As Chinese citizens become wealthier and more educated, they will surely push for more democratic inclusion in environmental policymaking.

Broad-based support for environmental concerns and subsequent regulations came about in open democratic argument on the value of nature for humanity. Democracies learn from mistakes; autocracies lack flexibility and adaptability5. Democratic nations have forged the most effective international agreements, such as the Montreal Protocol against ozone-depleting substances.

Impatient scientists often privilege hegemonic players such as world powers, states, transnational organizations, and multinational corporations. They tend to prefer sweeping policies of global mitigation over messier approaches of local adaptation; for them, global knowledge triumphs over local know-how. But societal trends are going in the opposite direction. The ability of large institutions to impose their will on citizens is declining. People are mobilizing around local concerns and efforts6.

The pessimistic assessment of the ability of democratic governance to cope with and control exceptional circumstances is linked to an optimistic assessment of the potential of large-scale social and economic planning. The uncertainties of social, political and economic events are treated as minor obstacles that can be overcome easily by implementing policies that experts prescribe. But humanity's capacity to plan ahead effectively is limited. The centralized social and economic planning concept, widely discussed decades ago, has rightly fallen into disrepute7.

The argument for an authoritarian political approach concentrates on a single effect that governance ought to achieve: a reduction of greenhouse-gas emissions. By focusing on that goal, rather than on the economic and social conditions that go hand-in-hand with it, climate policies are reduced to scientific or technical issues. But these are not the sole considerations. Environmental concerns are tightly entangled with other political, economic and cultural issues that both broaden the questions at hand and open up different ways of approaching it. Scientific knowledge is neither immediately performative nor persuasive.

There is but one political system that is able to rationally and legitimately cope with the divergent political interests affected by climate change and that is democracy. Only a democratic system can sensitively attend to the conflicts within and among nations and communities, decide between different policies, and generally advance the aspirations of different segments of the population. The ultimate and urgent challenge is that of enhancing democracy, for example by reducing social inequality8.

If not, the threat to civilization will be much more than just changes to our physical environment. The erosion of democracy is an unnecessary suppression of social complexity and rights.

The philosopher Friedrich Hayek, who led the debate against social and economic planning in the mid-twentieth century9, noted a paradox that applies today. As science advances, it tends to strengthen the idea that we should “aim at more deliberate and comprehensive control of all human activities”. Hayek pessimistically added: “It is for this reason that those intoxicated by the advance of knowledge so often become the enemies of freedom”10. We should heed his warning. It is dangerous to blindly believe that science and scientists alone can tell us what to do.