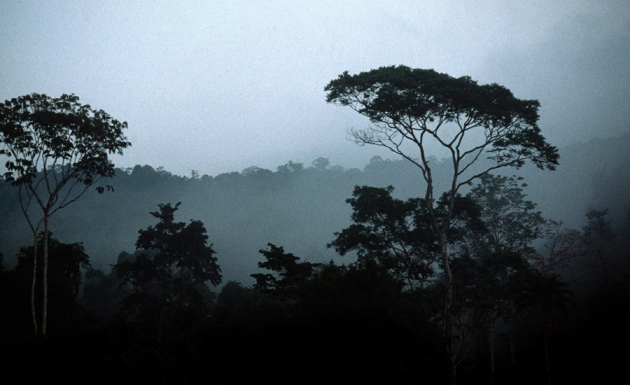 Tropical forests will respond to rising carbon dioxide in ways that are hard to predict with climate models.

The US Department of Energy has approved a campaign to better understand the response of tropical forests to rising levels of atmospheric carbon dioxide. The experiments are designed to improve global climate simulations and to determine whether the increased tropical-forest growth caused by carbon dioxide enrichment will partially offset global warming.

The US$96-million Next-Generation Ecosystem Experiment for the tropics, NGEE Tropics, builds on an ongoing project in the Arctic that has put climate modellers into the field with ecologists, biologists and hydrologists to improve understanding of the fate of permafrost in a warming world. The department plans to announce the new programme within weeks.

Focusing on the future of tropical forests and their role in regulating the global climate, the ten-year tropical programme will begin with pilot studies at sites in Puerto Rico, Panama and Brazil, and then expand into other areas, including Africa and southeast Asia. Although ecologists have studied tropical ecosystems intensively, the new experiments will be designed to plug specific gaps in climate models.

“The whole point is getting data that is appropriate for working with models,” says Richard Norby, an ecologist at the Oak Ridge National Laboratory in Tennessee, who is involved in the project. “I think the days of doing independent experiments and then just publishing data and seeing if somebody picks it up are over. And they should be over.”

Climate models suggest that tropical forests could significantly offset human carbon emissions — or not — depending on whether the forests grow faster as atmospheric carbon dioxide concentrations rise. Experiments in northern temperate forests suggest that the increase will have some growth-stimulating effect as plants take up some of the extra carbon dioxide through photosynthesis and incorporate it into wood and other biomass, but that additional growth may be limited by the availability of other nutrients, such as nitrogen.

In a pilot study in Puerto Rico, ecologists will investigate below-ground biogeochemistry and soil fertility in combination with aerial imaging to see how these processes affect leaf chemistry. A site in Brazil will focus on daily and seasonal soil-moisture changes to better understand how tropical forests respond to droughts. A third pilot project, in Panama, will look at various plant traits and how they are represented in the models.

The tropical campaign follows the launch in 2012 of a similar project in the Arctic designed to determine the extent to which the melting of permafrost due to warming will release vast stores of carbon buried for thousands of years. Most climate models include only a crude representation of the tundra, treating permafrost as a single uniform layer that responds uniformly to increases in temperature. In reality, permafrost is a patchwork of ice wedges and troughs that break up the landscape into countless polygons. As ice melts, the troughs expand and widen and new ones open up, which hastens further melting and decomposition of organic material.

“If it was a simple landscape that was responding linearly, you could get away with those simple representations,” says Peter Thornton, a climate modeller at Oak Ridge who heads the modelling component of the Arctic project. “But the distribution of these ice wedges is regularly patterned and that forces dynamics at these fine scales that are completely nonlinear.”

“The whole point is getting data that is appropriate for working with models.”

Since the Arctic project began, scientists have drilled boreholes into ice wedges and troughs at the site near Barrow, Alaska, to get a sense of how water and heat penetrate the permafrost layers. The goal is to understand how fast the microbes in thawing permafrost will break down vast stores of organic matter that have been stored in the soil for millennia. That process releases methane, a potent greenhouse gas. Ice cores are being analysed and subjected to heating experiments at the Lawrence Berkeley National Laboratory in Berkeley, California, to uncover how different microbes respond.

In other field experiments, biologist Alistair Rogers at the Brookhaven National Laboratory in New York analysed rates of photosynthesis in a variety of Arctic plants. From these real measures, Rogers found that even the handful of climate models that do include explicit vegetation types underestimate the photosynthetic potential in the Arctic by a factor of three to five.

Modellers and field scientists have gradually grown further apart as the scientific disciplines have become increasingly complex, but this new approach seems to be reversing that trend, says Ted Schuur, an ecologist at the University of Florida in Gainesville, who is a reviewer on the NGEE Arctic programme. Although it is still early in the project, he says, “the way they have organized their pipeline really points toward success”.

The challenge for modellers is how to simulate ecological processes that take place at the scale of microbes and plants within global models comprised of grids of squares up to 100 kilometres on a side. Thornton’s team is working on new models that bridge the gap between those vastly different scales in the Arctic. These will be integrated into a new climate model under development by the energy department.

Scientists will take a similar approach in the tropics. They have already begun to assess climate models to identify weaknesses and gaps in how they represent tropical ecosystems.

In addition to improving climate models, the effort will produce new advances in basic science, says Jeff Chambers, a tropical ecologist at the Lawrence Berkeley National Laboratory and director of the NGEE Tropics project. “It’s a fantastic opportunity, and there’s plenty of room for discovery science along the way.”