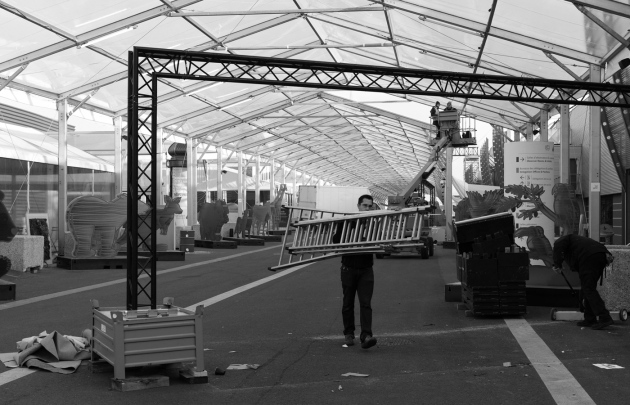 In the aftermath of the successful 2015 Paris climate conference, the public remained unengaged.

Climate change is a popular topic in Germany right now. Leading researchers are converging in Potsdam this week to take stock of the economic and societal impacts of global warming across sectors from health to agriculture. In Berlin, experts are meeting to discuss the potential and risks of various geoengineering technologies intended to counteract the effects of climate change. And next month, at the climax of the climate-meeting season, thousands of delegates will flock to the United Nation’s annual climate summit, this year in Bonn.

At the UN meeting, governments will discuss the next steps in implementing the global climate agreement that they reached in Paris almost two years ago. The landmark deal, which came into force last November, aims to limit global warming to 1.5 °C above pre-industrial temperatures. To achieve this ambitious (many say unrealistic) goal, the world’s major economies might need to phase out emissions of heat-trapping greenhouse gases entirely within a few decades.

The Paris accord, although based on merely voluntary national contributions, was undoubtedly a rare triumph for international climate diplomacy. It was the most that was possible and the least that was needed. Alas, the excitement did not last long. The subsequent U-turn of the United States — President Donald Trump has resolved to leave the deal, deeming it half-baked, essentially unnecessary and intolerably unfair to the US economy — has dampened spirits. Even so, the rest of the world has pledged to stand firm. The first conference of the parties to the agreement in the Trump era must now work out how to proceed without the world’s largest economy. In theory, the annual climate roller coaster is idling through one of the low-key phases in which success is measured by nothing going wrong. In practice, the Bonn meeting will serve as a litmus test of how the rest of the world plans to stand united and to keep the spirit of Paris alive.

Keynote speakers in Bonn (and presenters in Berlin and Potsdam) will no doubt reiterate the severity of the global-warming threat and the urgent need to act. Major meetings often galvanize debate among researchers, pundits and policy watchers. But beyond this predictable fuss in the expert world, do high-level climate meetings and policy events, and the media coverage they bring, help push the wider public to engage with the climate problem?

Not quite, it seems. Results of a survey of the German public, published this week in Nature Climate Change, suggest that extensive media coverage of the Paris climate summit had a soothing rather than a mobilizing effect (M. Brüggemann et al. Nature Clim. Change http://dx.doi.org/10.1038/nclimate3409; 2017). Respondents who had taken notice of media reports (and many said they had not) had slightly more trust in the efficacy of global climate policy after the unusually successful meeting. However, fewer were in favour of their own country taking a leading role, and most said that they did not intend to change their behaviour. In essence, respondents were relieved that a political deal had finally materialized, but were disinclined to engage further with the issue.

The researchers who conducted the survey say that this is a missed opportunity. The annual UN meetings bring guaranteed media attention to a topic that many news editors are bored with, and so they are an opportunity to mobilize action. As such, the study authors go so far as to suggest that the lack of public engagement is a failure of journalism.

It might indeed seem worrying that despite the avalanche of information, climate change remains marginal to most people’s personal and political choices — Germany’s strong green movement notwithstanding. It might even seem like a bad case of civil indifference. Does it matter? There is an argument that climate action does not have to depend on media-stirred engagement from agitated citizens. People often choose to leave responsible decision-makers to deal with complex global problems that only concerted international effort can hope to solve, and this has brought progress on issues such as nuclear non-proliferation and the phase-out of ozone-depleting chemicals.

But climate change is a more complex issue, and one that cuts across many overlapping and sometimes contradictory concerns, from cultural and political issues to ethical and psychological ones. As such, organizations, businesses, scientists, policymakers and others who advocate action on global warming must continue to strive to take the public with them. As many experts have pointed out, that will take creativity and more than repeated references to the serious nature of the problem — in Bonn and elsewhere.