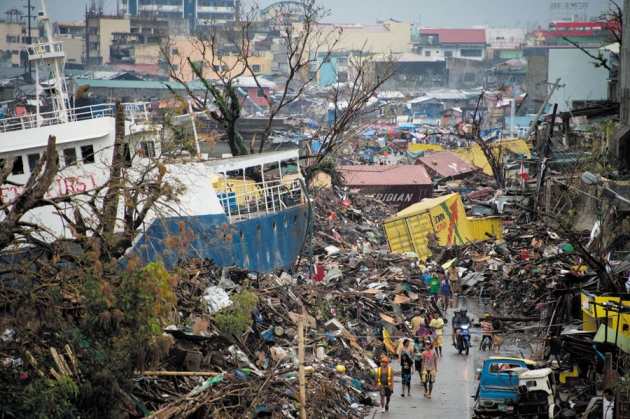 A ship and containers washed ashore by Typhoon Haiyan, which ravaged the Philippines in November 2013.

Extreme weather — including massive storms such as Typhoon Haiyan and Hurricane Sandy, and severe floods and droughts — is likely to become more frequent and intense as global warming accelerates1.

Links in global economic chains and world markets mean that extreme weather in one place can have repercussions elsewhere. For example, a combination of exceptional rainfall and Cyclone Yasi in 2010–11 paralysed the world's fourth-largest region of coal exploration in Queensland, Australia. Coking coal prices rose the following year by 25%. In 2011, droughts and floods in Russia, Pakistan and Australia caused global food prices to climb, possibly contributing to the escalation of civil unrest in Egypt, Syria and Saudi Arabia. The long-term economic impacts of Typhoon Haiyan, which devastated the Philippines in November 2013, are yet to be felt, but are likely to affect global trade and manufacturing.

Yet the impacts of adverse weather on supply chains are missing from the assessments of the Intergovernmental Panel on Climate Change1, and, with a few exceptions2, are being ignored in discussions around adaptation. This is a mistake. Adaptation requires a global strategy, not just local ones.

It is these unanticipated and sudden shocks from extreme weather events on global trade that are most disruptive for society; gradual changes can be foreseen and are easier to adapt to. Sitting in a bathtub with the tap running it is easy to stop the floor getting wet as the water rises by placing a few towels (up to a point). But the effect of climate change is like throwing rocks into the water. Our interlinked societies, the dynamics of which we are only beginning to understand, are like dominos lined up on the edge of the tub. One wave can make them all tumble.

As protests in Brazil, Turkey and Greece in recent years have shown, societies do not have to be brought to the verge of starvation to descend into turmoil. Communities respond to events in unforeseen ways. The triggers might be small and the reactions cannot be understood with equilibrium economic theory3. With the fragility of our globalized economy becoming more evident, it is time to readjust our focus.

The influence of climate change on the worldwide flows of materials, electricity, communications and energy, including interactions between them and the rapid dynamics of volatile markets, needs to be modelled and understood. As a first step, we must collect and share basic data on global supply chains.

To this end, my colleagues and I at the Potsdam Institute for Climate Impact Research in Germany have set up a website called Zeean (www.zeean.net) to host such information and to help to kick-start a community effort to understand and model it. By making these economic data available, governments and companies will be alerted to crucial bottlenecks in supply chains and can respond accordingly. Factoring in the costs of climate change will, we anticipate, allow market forces to help to stabilize the global supply network and make societies more resilient.

Almost all adaptation research so far focuses on local or regional responses to gradual changes in climate. This perspective has steered climate-change concerns towards long-term threats to fragile ecosystems and poor rural communities, which could be lessened through targeted strategies, such as altering crop production in the face of shifting monsoons in India, for example. Meanwhile, global trade connections and dramatic weather events are colliding — with even more costly consequences. 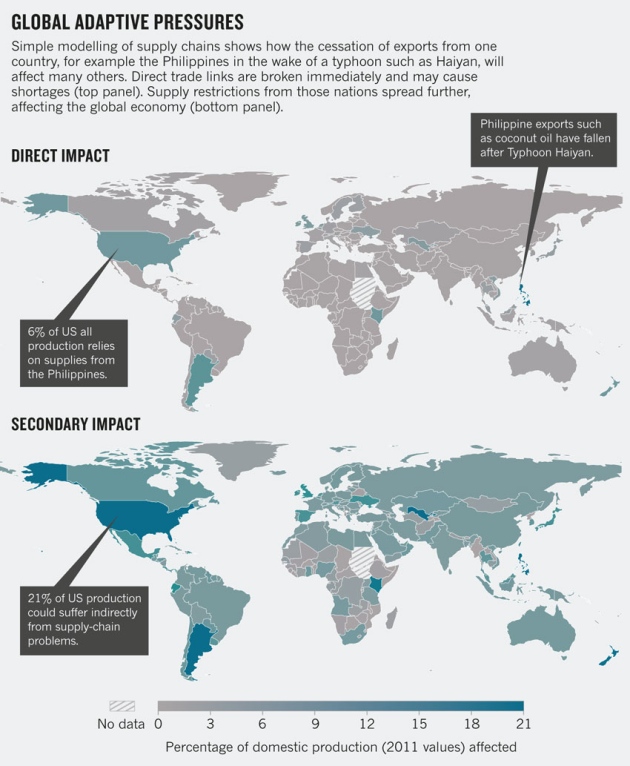 Thailand's devastating 2011 floods destroyed the country's automobile industry. And by disrupting manufacturing of mainly Japanese technology companies based in Thailand, the floods also caused a global shortage of hard-disk drives. With more than US$46 billion in damage4, the floods were ranked as the fourth-costliest disaster ever by the World Bank. But that does not include secondary losses from missing means of production.

Disruption to pharmaceutical supply networks is already having deadly consequences. The increasingly complex supply chains for drugs are highly susceptible to blockages, causing shortages of medicines. In 2011, global supplies of cancer and AIDS medications ran short after a failed hygiene inspection of one US manufacturer (see go.nature.com/qhgfg5). Extreme weather events compound those risks. “Resting on old standards — even ones that have worked for decades — is no longer enough,” cautioned Robert Parkinson, president of the US pharmaceutical company Baxter, addressing a US congressional subcommittee in 2008.

Bouts of severe weather in quick succession are even harder to recover from. Pakistan, for example, is still suffering from devastating monsoon-induced floods in 2010 and 2011. If hurricanes Sandy and Katrina had hit the US seaboard in the same season as last year's drought, even the United States might have struggled to cope.

A simple calculation of economic flow disruption illustrates how the global repercussions of weather disruptions to supply chains are likely to eventually exceed the direct damages. On the basis of data collected by Manfred Lenzen, a professor of sustainability research at the University of Sydney, Australia, and his colleagues5, we estimate that if not replaced, the cessation of exports from the Philippines, for example from fisheries and agriculture, would affect 6% of US production directly (see 'Global adaptive pressures'). The potential secondary effect, mainly through the retail trade, would be larger and could affect 21% of US production. The Philippines are globally the largest exporter of coconut oil, which is used in food products worldwide. For major economies such as Japan, Spain, the United Kingdom and the United States, mounting impacts on sectors such as food production might greatly exceed the direct one.

Adaptation, like mitigation, needs to be global, but that does not mean it must be coordinated or regulated. Because the main aim of adaptation is to avoid damage, market forces might be effective in transferring costs. Just as the costs of insurance and meeting local safety requirements are factored into the prices of goods today, the costs of protecting supply chains from natural hazards can be included — if the information is available.

In many cases it will turn out that a diverse but reliable supply net is more favourable than relying on one source, even if that transportation route seems cheaper at first sight.

Lenzen's group has pioneered the application of supply-chain data to climate and sustainability problems5. They have compiled a database covering 26 industrial sectors in more than 180 countries, including, for example, the quantity of Australian coal used by the German steel industry and how much German steel is used in Russian ship building and Japanese car fabrication. 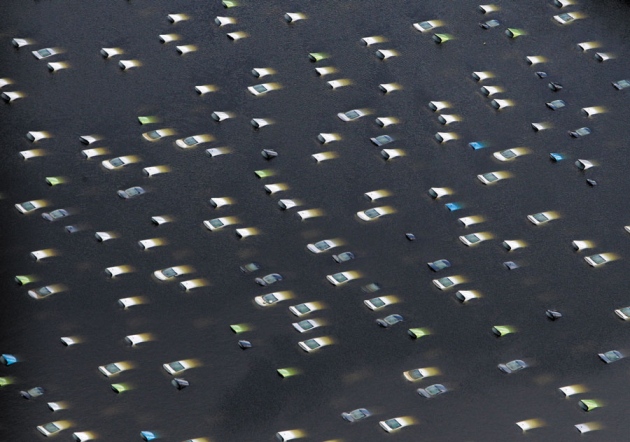 Submerged cars from a Honda factory after floods in Thailand in 2011.

Building on Lenzen's data, we plan for Zeean to eventually cover 400 sectors and individual states, provinces and cities, allowing users to track the flows of specific goods at a scale appropriate for the effects of natural disasters. Users could ask, for example, how many batteries are shipped from Osaka, Japan, to California. Or what is the impact of a hurricane in Boston, Massachusetts, or a flood in Bangalore, India, on particular industries worldwide?

In some cases, this supply-chain information is publicly available, but scattered around. In other cases, it must be deduced from import and export figures provided by national statistical agencies or government and industry bodies.

We intend the information posted to Zeean to be cross-checked and validated by registered and vetted users who will be assessed according to the quality of their input, in a similar way to websites such as Wikipedia. Single pieces of data, such as the number of cars produced in a region of Germany, for example, may be entered, as well as whole data sets, such as the 400-sector trade input–output matrices for Australia and Japan.

The information will need to be checked by comparing data from different sources or through consistency calculations. The sum of all individual flows out of a region should not exceed its total export, for example. Unlike in earlier approaches, we will not harmonize the information within a single global matrix, but will use the existing international data structures that comprise large economic sectors, and apply consistency tests to finer data where we can. This will avoid the introduction of artefacts, such as small unrealistic flows, to bridge data gaps and make computations feasible.

The processed information will be publicly available, so that small businesses and poor countries can use it. Only openly available data will be included, to avoid legal and rights issues. Open-source algorithms and analysis tools will be used for accessibility. Funding to maintain the database is being sought.

With each piece of information added, Zeean will improve in accuracy. Users will be able to see a network evolving, analyse its connectivity and identify fragile links or nodes. By accommodating a variety of data, which need not be homogeneous, the database will allow for regional and economic foci of special interest.

Longer term, to produce supply-chain risk assessments, these economic data should be combined with probability assessments of future climatic extremes from global and regional climate models, as well as models of smaller-scale phenomena such as hurricanes6 or tornadoes. Other natural-hazard models might be included.

Understanding the global economic network is a huge challenge. The harmonization and cross-checking of the information will require constant effort, and some inconsistencies between data on different scales will be unavoidable. At the same time, the more information that is added, the better the network will get.

Although we will never be able to predict every impact, we must aim to provide the best information we can because society needs to decide what to do, even in the presence of uncertainty7. With the wrong focus, we will protect the wrong places with the wrong tools.