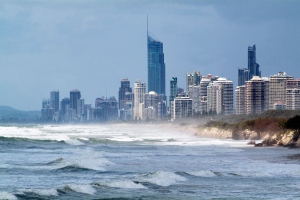 Australia's Gold Coast will see significant increases in wave heights in the next century.

Wave heights will increase in seas off Indonesia, Antarctica and Australia’s east coast, and will decrease in some other regions, an international collaboration reports today. The study looked into the effects of climate change on waves in the coming century, which may have implications for the fishing industry as well as for coastal mitigation efforts.

Waves mediate the continuous exchange of heat, energy, water vapour and gases between the atmosphere and ocean. They continually change in height, frequency and direction, influenced by wind and other factors that are in turn affected by climate patterns.

In the new study, published today in Nature Climate Change1, the researchers projected wave attributes for the next century using five independent wave-climate models. They adjusted parameters in the models for predicted changes in the global climate, such sea surface temperatures, following the Special Report on Emissions Scenarios of the Intergovernmental Panel on Climate Change.

The study concluded that wave heights will increase in areas such as parts of Indonesia, the Southern Ocean and Australia’s east coast, following shifts in the southern annular mode — a ring of climate variability that encircles the South Pole — and a strengthening of westerly winds in the Southern Ocean.

The researchers also predict a decrease in wave height for more than one-quarter of the world’s oceans, particularly in the Northern Hemisphere. The cause may be a northward shift of Pacific high pressure.

Calmer seas in the North Atlantic will make major shipping routes safer, says study co-author Nobuhito Mori, a wave dynamics researcher at Kyoto University in Japan, and will also give deep-sea fishermen a reason to cheer —  the industry requires wave heights to be smaller than 2–5 metres, depending on the size of the boat.

Coastal areas will be affected, as waves shape beach profiles and morphology. “When waves get smaller in the North Pacific, it means there will be less wave energy hitting the beach, and hence less beach erosion,” says study co-author Yalin Fan, an atmospheric scientist ]at Princeton University in New Jersey. Smaller waves will also mean less energy for wave-power industries.

The study raises important questions about how to quantify the effects of climate change at the coast, says Judith Wolf, a coastal oceanographer at the National Oceanography Centre in Liverpool, UK. “The projected effects of climate change on wave heights are at least as important for coastal impacts in many areas as increasing sea levels,” she says.