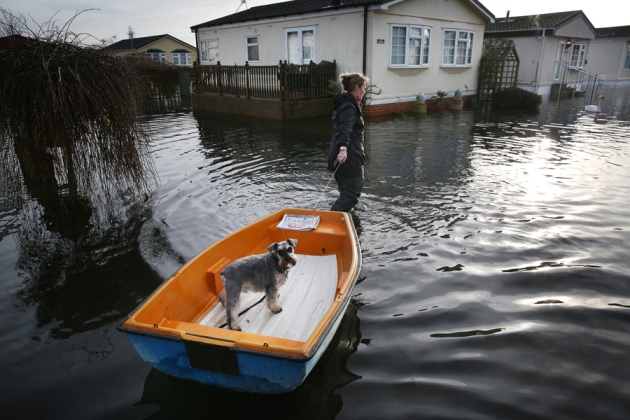 A woman and her dog negotiating flood waters in Chertsey, UK, in January 2014.

Catastrophic floods such as those that southern Britain experienced earlier this year are now more likely, owing to climate change caused by greenhouse-gas emissions. Simulations presented last week at the annual assembly of the European Geosciences Union in Vienna show that the risk of extremely wet winters in the region has increased by about 25% compared to the pre-industrial era.

Extreme rainfall events previously predicted to occur in Wales and southern England once every 100 years, on average, should now be expected once every 80 years, according to the simulations, which are the preliminary results of a climate study by researchers at the University of Oxford, UK.

The widespread flooding that occurred in parts of England and Wales this winter came along with the highest amount of winter rainfall ever recorded by the Radcliffe Observatory at Oxford, which has kept precipitation records for the past 250 years. The deluge fuelled ongoing public debate about whether extreme weather and floods will become more frequent in a warming world, and whether specific events can be linked to climate change.

To answer these questions, the researchers used a regional version of a general atmospheric-circulation model developed at the Met Office Hadley Centre in Exeter, UK. The scientists enlisted several thousand volunteers involved in a 'citizen-scientist' project, weather@home, to run simulations of the 2013–14 winter weather using the idle time of their personal computers. The researchers were able to obtain 40,000 runs of the climate model. 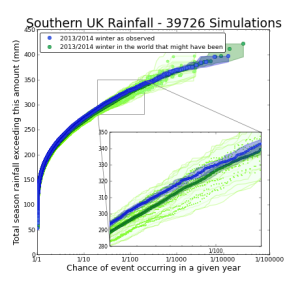 The probability of heavy rains in current conditions (blue) is higher than in simulations of a pre-industrial atmosphere (green).

In around 13,000 of the runs, the atmospheric greenhouse-gas concentration was set at present-day levels. A second set of runs was carried out on the basis of pre-industrial greenhouse-gas concentrations. In both cases, simulations incorporated observations of sea-surface temperatures from December 2013 to February 2014. However, in simulations based on pre-industrial concentrations, sea-surface temperatures were adjusted to account for warming due to human influence on climate. To cover a broad range of possible weather patterns, each run was repeated with slightly different starting values for atmospheric temperatures.

Over all, the likelihood of winters as wet as this year’s was about 25% higher in simulations based on actual climate conditions — a statistically robust result, given the large number of model runs.

“We can now say with confidence that the odds of prolonged heavy winter rainfall in the Thames valley and all over south England have markedly increased,” says Myles Allen, a climate modeller at the University of Oxford, who oversaw the experiment.

In a next step, says Allen, the researchers will try to establish how changes in winter rainfall will affect flood risk in different parts of England and Wales. To do so, they plan to couple projected precipitation changes with runoff models for specific catchment areas.

The method was first used in a 2011 study1 that found that climate change substantially increased the risk of severe floods like the ones that occurred in parts of England and Wales in 2000.

How climate change affects rainfall and flood risk at large is uncertain. Seasonal and annual amounts of precipitation vary, and trends are hard to detect amid this ‘noise’, says Efrat Morin, a climate scientist at Hebrew University of Jerusalem in Israel. Global climate models suggest that in a warmer world, dry regions may become even drier, whereas rainy regions, such as southern Britain, will get even wetter. But the Intergovernmental Panel on Climate Change (IPCC) has assigned only ‘medium confidence’ to the possibility of increased flood risk in wet regions.

“Exploring and explaining the links between climate change and extreme weather is one of the most valuable services climate researchers have to offer to society,” says Thomas Stocker, a climate modeller at the University of Bern in Switzerland, who co-chaired the IPCC’s 2013 report on the physics of climate change. “Such practice should become the rule — not only with a view to floods but also when heat, drought or big storms strike.”