Climate change is leaving a visible mark on at least one subspecies of plant in South Australia. The leaves of the hopbush (Dodonaea viscosa subspecies angustissima) have narrowed by 2 millimetres over the past 127 years — a 40% decrease in width. The finding is published in Biology Letters1 this week.

Previous studies2 have documented shifts in species ranges and the timing of natural cycles such as plant flowering and bird migration as a result of global warming. But few have demonstrated morphological adaptations to climate change in plants and animals. 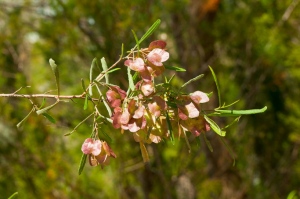 The narrow leaves of the hopbush (Dodonaea viscosa angustissima) are getting even skinnier.

The latest results show that “the responses to climate change are happening now, and that they’re not something that’s only going to happen in the future”, says Greg Guerin, a plant ecologist at the University of Adelaide in Australia and a co-author of the study.

Guerin and his colleagues took measurements of hopbush plants across 600 kilometres of latitude and 1 kilometre of altitude in Southern Australia. They found that the closer plants grew to the equator — that is, the warmer and drier their climates — the narrower their leaves were. When they also analysed the leaf shape of 255 herbarium specimens of the same subspecies dating back to the 1880s, the researchers discovered that the leaves had also become narrower over time.

Such changes would be expected as a result of warming and attendant drought: plants in dry areas often bear long, slender leaves, to reduce the amount of water lost from them owing to evaporation and gas exchange. Still, the extent of the changes was surprising to the researchers. “Before I did the analysis I suspected there hadn’t quite been enough time for that kind of shift to happen,” says Guerin.

Changing with the times

Andrew Lowe, a plant conservation biologist at the University of Adelaide and a co-author of the study, says that the result is good news for the hopbush subspecies, because “it shows it has the adaptive capacity to cope with the climate change that we’ve experienced to date”.

The researchers have not yet done genetic tests to find out whether the changes in leaf shape have an underlying genetic basis, or whether the plants rely on a built-in plasticity that allows them to respond to temperature changes.

David Greenwood, a palaeoecologist at Brandon University in Canada, cautions that the study doesn’t offer a complete picture. He notes that the researchers didn’t analyse changes in the stomata — the pores on the surface of leaves that open and close to facilitate gas exchange and water movement. The number of stomata are important aspects of leaf anatomy; they affect how well the plant survives in water-poor environments, and are related to leaf size.

Guerin and his colleagues plan to investigate these factors by studying leaf ecophysiology in more detail. They also intend to explore whether the leaf adaptations they have observed are present in other species.

Greenwood does agree that the study shows that climate change in recent decades is probably influencing the range of leaf sizes and shapes in regional populations of hopbush. In effect, he says, Guerin and his colleagues are “following the path of the palaeobotanists, but over decadal scales, not millennia or multi-million year spans”.