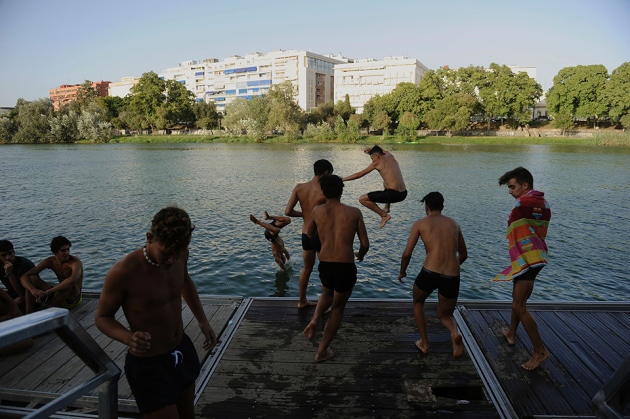 Seville is set to get hotter and drier without major cuts to greenhouse-gas emissions.

Seville and Lisbon have thrived for more than a thousand years in a temperate climate. But if global warming continues at the current pace, these cities will be in the middle of a desert by the end of the century, climate modellers report on 27 October in Science1.

Maintaining the historic ranges of the region’s ecosystems would require limiting warming to just 1.5 ºC, by making substantial cuts to the world’s greenhouse-gas emissions, the analysis concludes. Otherwise, the vegetation and ecosystems of the Mediterranean basin will shift as temperatures rise. Increasing desertification in southern Europe is just one of the changes that would result.

“Everything is moving in parallel. Shrubby vegetation will move into the deciduous forests, while the forests move to higher elevation in the mountains,” says Joel Guiot, a palaeoclimatologist at the European Centre for Geoscience Research and Education in Aix-en-Provence, France, and lead author of the study.

Guiot’s analysis combines a climate model with a vegetation model that predicts how plants on land will respond to changes in temperature, rainfall and the concentration of greenhouse gases in the atmosphere. He and his co-author, Wolfgang Cramer, scientific director of the Mediterranean Institute for Biodiversity and Ecology in Aix-en-Provence, looked at a range of outcomes based on different scenarios for the world’s future emissions. They include limiting warming to 2 ºC and 1.5 ºC above pre-industrial levels — the range set by the Paris climate pact ratified earlier this month.

“I like that they’re doing this comparison across different warming scenarios in line with the Paris agreement, to start to gauge the sensitivity to them,” says Benjamin Cook, a climate scientist at the NASA Goddard Institute for Space Studies in New York City.

The study confirms the vulnerability of many ecosystems, and could guide policymakers’ efforts to help natural systems adapt to climate change, says Patrick Gonzalez, principal climate-change scientist at the US National Park Service based at the University of California, Berkeley2. “This study shows how essential it is for nations to meet their Paris commitments.”

The situation in southern Europe is similar to the US southwest, Gonzalez points out: temperature increases drive droughts3. More carbon dioxide in the atmosphere means rising temperatures, less precipitation and then more drying that leads to desertification.

The model used in the new study also reconstructs the historic ranges of Mediterranean ecosystems' vegetation, to put potential future changes in context. “Essentially, vegetation hasn’t changed much over the past 10,000 years,” says Filippo Giorgi, head of the Earth System Physics Section of the International Centre for Theoretical Physics in Trieste, Italy. “It’s interesting that they put potential future changes in that context.”

Both the climate and vegetation models have significant uncertainties, however, and the models can account only for natural vegetation, rather than managed vegetation such as forests and crops. The study ignores the fact that humans continually affect ecosystems through land-use change, urbanization and soil degradation.

“If we had the possibility of including these human impacts, it would be even worse than what we simulated,” Guiot says.