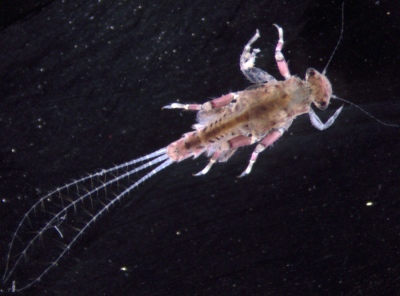 A mayfly from Ecuador could shed light on climate-change effects.

Up in the foothills of the Rockies last summer, researchers from Colorado State University in Fort Collins fanned out along the banks of a stream. Some took the water's temperature and measured its speed and chemistry. Others waded in to catch insects using flat-bottomed nets. Aquatic ecologist LeRoy Poff combed through the haul, dropping the live stoneflies, caddis flies and mayflies into separate bins in a tackle box. Back at the lab, these would be further sorted under a microscope and then genetically barcoded — a way to catalogue the species.

Over the past year and a half, the team has run through the same procedure at 25 other streams in Colorado, and 26 in the Ecuadoran Andes, studying how variation in air temperature and water flow have affected insects in the two regions. The effort is part of a five-year project, called EVOTRAC (Evolutionary and Ecological Variability in Organismal Trait Response with Altitude and Climate), which seeks to understand how the evolutionary history of animals will influence their chances of survival in a world altered by global warming and other environmental changes.

The project was designed, in part, to test an influential hypothesis proposed in 1967 by ecologist Daniel Janzen. Janzen posited that tropical species have a hard time crossing mountains to expand into new territories because they are adapted to a fairly steady climate that never gets extremely hot or cold. At the time, global warming wasn't on the radar. But now Janzen's ideas have resurfaced as a guide to how climate change might affect biodiversity.

Although Janzen's hypothesis is widely accepted, much of it has never been tested directly. The EVOTRAC team, and other biologists, are now trying to remedy that — and to extend his idea about temperature to other environmental factors that are affected by climate, including stream conditions. If the hypothesis holds, it implies that tropical species may be particularly vulnerable to climate change, even though temperate and polar regions will warm much more than the tropics. The hypothesis could also help researchers to develop conservation plans for dealing with climate change.

Janzen's pivotal idea came to him in the mid-1960s, when the young ecologist at the University of Kansas in Lawrence was travelling around Costa Rica with 20 US students and a Costa Rican assistant. The trip began in the assistant's home city of San José, which had a 'bland' climate that was, Janzen says, “not too hot, too cold, too wet or too dry”. From there, they travelled to a dry tropical forest at sea level, where the weather was hotter. During a lecture, Janzen saw sweat pouring off his assistant. “And I looked at the students and none of them was sweating,” says Janzen.

Later, when the group moved to a field station at 3,000 metres elevation in the cold, wet cloud forest, Janzen saw his assistant “sitting with piles of blankets on him. Everyone else was sitting there in khakis. I realized this guy has spent his life in San José, which is like sitting in a climate-controlled cabinet.”

“The thought hit me,” says Janzen, “that all these tropical animals and plants around me are living in whatever their temperature regime is. And it stays that way.”

He reasoned that because tropical species are not exposed to seasonal extremes, they are locked into relatively narrow temperature ranges at specific elevations in the mountains. That prevents most of the creatures from spreading over mountains into adjacent valleys, which limits the flow of genes and increases the overall biodiversity in the tropics, he said. 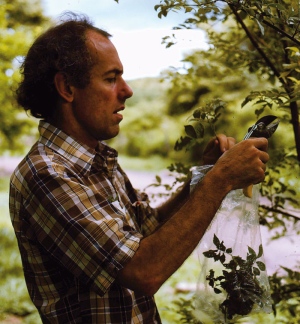 Climate change has rekindled interest in Daniel Janzen's ideas from the 1960s.

When Janzen published his ideas1, funders were not supporting the kind of big, interdisciplinary studies that would be required to test them. But when Cameron Ghalambor read Janzen's paper as a graduate student at the University of Montana in Missoula in the late 1990s, “it was one of the best papers I ever read”, he says. He was struck by the idea that climate could shape so many aspects of a species' history and life cycle, and that this in turn could shape patterns of biodiversity. He told his adviser he wanted to pursue some of Janzen's ideas, but was shot down. “That's not something you can do in a PhD project,” he recalls being told. “That's something you do over a lifetime.”

But other biologists were already thinking along the same lines. “Janzen's theory is unique in that it couples climate variability, physiology and ecological and evolutionary principles,” says Christy McCain, an evolutionary biologist at the University of Colorado Boulder. Inspired by Janzen's ideas, McCain spent nearly a decade compiling some 80 years of data on the ranges of 16,500 species that live on 170 mountains2. “I looked at whether in fact range sizes were smaller on the low-latitude mountains,” she says — the first part of what has come to be known as Janzen's climate variability hypothesis. Her results were published in 2009 (ref. 2). “Bats, birds, frogs, salamanders, lizards and snakes all show the trend. It's a linear decrease as you go from high to low latitude.” Strangely, however, McCain found that the opposite was true with rodents, a fact she still struggles to explain.

Ghalambor, who is now at Colorado State, had reached a similar conclusion about Janzen's hypothesis in 2006 (ref. 3), when he and scientists from the University of Washington in Seattle analysed published studies of vertebrate ectotherms, such as reptiles, which are particularly sensitive to temperature. The team found, for instance, that the altitudinal ranges of tropical reptiles were more limited than those of temperate species. Ghalambor's group wondered whether Janzen's hypothesis could be used to test which species were likely to be most vulnerable to climate change.

In 2008, Ghalambor joined up with Raymond Huey, a co-author on the 2006 paper, and other researchers at the University of Washington to examine the physiological tolerance of lizards and other ectotherms across different latitudes. The group found — just as Janzen's hypothesis suggests — that the optimum temperatures for tropical species are very close to what they currently experience, which means that the animals may not fare well as temperatures rise4.

“If you go to tropical lowland forests, the lizards that occur there are the least heat-tolerant lizards in the world,” Huey says. The temperatures in a tropical forest never get much above 32 °C and lizards there go into heat stress at 36 °C or 37 °C, he says.

The implication for a lizard, says Ghalambor, is that “a little bit of warming in the tropics quickly puts you outside your optimum”.

To put that idea to the test, Huey has now reunited with a group of scientists he has known since graduate school, who all studied lizards in Puerto Rico in the 1970s. Using their old data as a guide, the researchers are going back to make new measurements to determine whether the lizards on the island are adapting to warming temperatures or showing signs of stress.

Back in Colorado, Ghalambor began talking to Chris Funk, an evolutionary biologist who studies amphibians, about ways to test Janzen's hypothesis. They mentioned their interest to Poff, who is an expert on aquatic insects. Poff was intrigued — and saw a parallel research opportunity to test other factors that influence species' ability to adapt or move. He had spent his career working on streams, which change from one season to the next because of variations in water flow. Extrapolating from Janzen's work, Poff wondered whether insects inhabiting streams that fluctuate strongly have evolved to tolerate much more variation than those living in more constant environments. So he teamed up with Ghalambor and Funk to test whether Janzen's hypothesis applies in the complex stream environment, where climate change is altering both temperature and water-flow patterns.

A year and a half into the EVOTRAC project, the scientists have yet to answer that question, but they have discovered that the streams in Colorado and Ecuador seem to contain many cryptic species — those that look the same but are genetically distinct. If scientists have previously underestimated biodiversity in those spots, and the cryptic species are adapted to very specific ranges of temperature and water flow, then both locales could be more vulnerable to species loss than anyone has thought.

After a few hours collecting in the Colorado stream last summer, the EVOTRAC team packed up its collection of flies and headed back home. The two-hour drive wound through Poudre Canyon, 64 kilometres of forest that had been blackened by a massive wildfire just a few weeks earlier. There is a sense of urgency to the work. Record-breaking droughts and fires are taking a toll on the American West, and rapidly melting glaciers in Ecuador are altering rivers and streams at lower elevations. Climate change is already making its mark in the forests of both regions, even as researchers race to forecast how ecosystems will fare in the warming world.