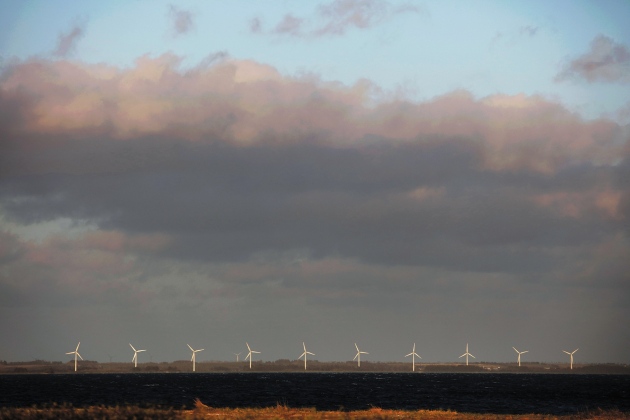 The Paris climate agreement to keep global average temperature rise below 2 °C requires the world to switch rapidly to low-carbon energy. Global carbon emissions must peak by 2020, fall to zero between 2060 and 2080 and become negative by 21001. The effort and investment needed would be immense, but it could happen: in 1800, the British government spent one-quarter of its per capita expenditure on becoming the world’s major naval power2; the US Interstate Highway System cost US$560 billion (in 2007 dollars) over 37 years of construction3.

Clearly, a huge global commitment to clean-energy research and development (R&D) is needed. Two global partnerships were proposed in 2015 to push governments to make the massive investments required: Mission Innovation and the Global Apollo Programme.

Mission Innovation has got countries to pledge to do more R&D on clean energy. But it is not binding and its targets are open to interpretation, being ‘bottom up’ and voluntary. Global Apollo set narrower ‘top down’ priorities, but in so doing it has won little national support. Neither covers private spending on R&D, which dwarfs public outlay, is hard to audit and complex to influence.

These initiatives will shape clean-energy research over the next few decades. They need to improve in three respects: their baselines, definitions and private partnerships.

Mission Innovation enjoins 20 countries and the European Union4 to double current annual public R&D funding in clean energy to $30 billion by 2020. (The EU’s pledge is based on central research funding and some EU countries have also enrolled separately.) Global Apollo, meanwhile, proposed investing $15 billion a year for ten years5. It calls on developed countries to plough 0.02% of their gross domestic product (GDP) into public R&D to make electricity from renewable sources cheaper than that from coal by 2025.

The voluntary approach of Mission Innovation can be ‘gamed’ to lower a nation’s commitment. Nations calculate their Mission Innovation pledges by choosing a baseline for funding and doubling it. When countries announced their pledges in June this year, most based them on unreported data or funding statistics that are not clearly defined. Only Australia and Canada used official data published by the International Energy Agency (IEA). Some countries chose a single year (2013, 2015 or 2016) from which to double government spending; others took a three-year average (from 2010 to 2013, say).

Such choices shift the goalposts. For example, Australia’s target was 4.5 times lower than it could have been — Aus$208 million (US$160 million) rather than Aus$938 million — because it used 2015 as a starting point (Aus$104 million4) rather than using a three-year average from 2012 to 2014 (Aus$469 million). The EU, France, Mexico, Norway, Sweden and the United Kingdom used three-year average baselines (see ‘Big promises’). 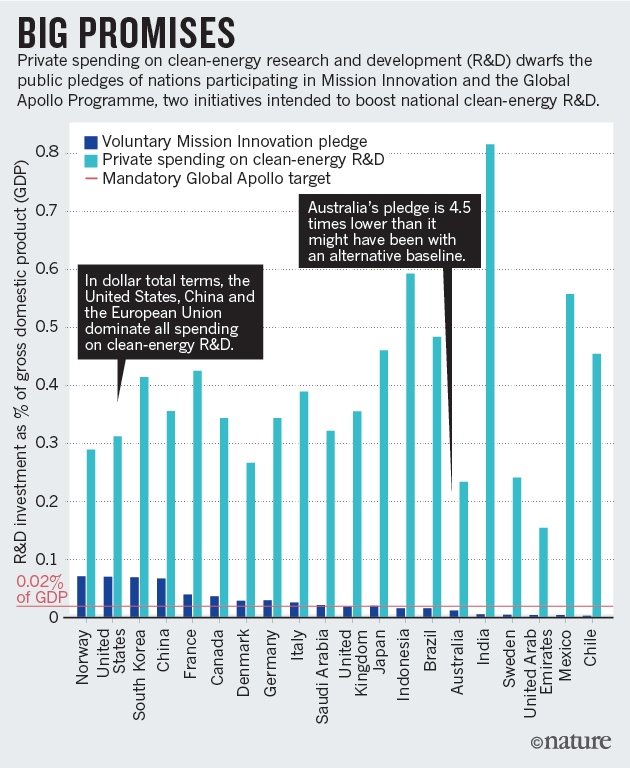 Pledges may partially repackage separately planned spending increases. For example, the EU’s clean energy R&D target is €1.974 billion (US$2.2 billion) per year by 2020. It would have reached €1.493 billion by 2020 anyway without Mission Innovation.

A doubling goal continues the global imbalance in R&D capacities. Mission Innovation’s national targets as a percentage of GDP vary by a factor of 20, from Chile’s 0.0037% to Norway’s 0.072%. By contrast, Global Apollo’s ‘one size fits all’ contribution of 0.02% GDP may be hard for developing nations to achieve and too low to make a difference for R&D intensive countries.

What does clean mean?

The scope of what is deemed clean energy R&D varies between countries. This makes pledges difficult to decipher. Some speak of just research and development. Some add another ‘D’: demonstration. Most clean-energy R&D is concentrated in a few areas — the United States, China and Europe. Mission Innovation says little about how to spread advances to other regions and deploy them at scale.

The many definitions of clean energy change budgets dramatically. Some countries take it to mean renewables such as wind, solar and hydropower; others include energy efficiency, nuclear energy and carbon capture and storage (CCS). Some interpret clean energy as that which is non-polluting or has low environmental impact or comparatively few carbon emissions. Some even include ‘clean coal’ or the increased deployment of natural gas. For example, nuclear power accounts for one-quarter of the United Kingdom’s baseline. A country could meet its pledge by tripling nuclear R&D and doing little on electric transport, renewable energy or smart grids, say.

“Countries must meet their 2020 pledges.”

Most countries gave no spending breakdowns by sector, or offer confusing ones. Germany’s stated definition of clean energy includes renewable energy, energy efficiency, storage technologies, grid technologies, CCS, fuel cells and other sectors, including ‘cleaner fossil energy’. But the country’s three-year average baseline for Mission Innovation (annual R&D funding between 2013 and 2015) of €450 million seems only to reflect expenditure on renewable and energy-efficient technologies (€488 million reported to the IEA in 2014) and not that spent on CCS, hydrogen and fuel cells, and power and storage (another €129 million). Without accurate data, it is hard to judge each country’s intentions.

These problems weaken progress towards the goals of the Paris agreement. Global advantages from regional research specialities, such as knowledge from Denmark on designs for wind turbines, will be squandered. And Mission Innovation spending will be spread thinly. In June, the partnership published an ‘enabling framework’ that sets out general principles and ways of working6. It lacks detail and concrete next steps. 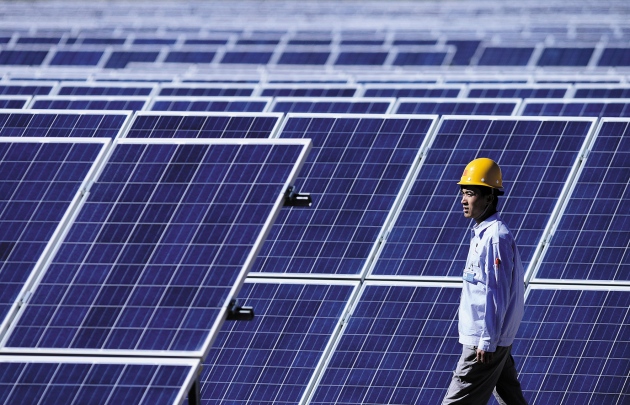 The private sector dominates R&D in clean energy. It is absent from both Mission Innovation and Global Apollo. Funding levels are hard to establish because much of corporate R&D takes place in-house. It typically accounts for a large proportion of a country’s R&D — around 70% of all R&D in the United Kingdom7, for instance. The overall proportion may be even higher in other nations, such as India and Chile.

Private-sector spending on R&D can be estimated by tracking chains of transactions between companies and reported figures of proportional spend on R&D (transactional data). This methodology underlies the ‘Low Carbon and Environmental Goods & Services’ data set developed by the digital intelligence company kMatrix (of which M.P. is director)8. Our findings suggest that previous, general assessments underestimate private funding for clean energy R&D.

Private investment is mainly directed at technologies deployed at scale rather than those in development. For example, in the United States, we found that for every dollar of public R&D funding reported to the IEA, private companies invest $25 in renewables R&D but just $0.56 in CCS. Similar analyses would help countries to identify other areas that are not being backed by private companies — perhaps hydrogen and fuel cells — and thus need more public support.

There are positive signs. The Breakthrough Energy Coalition is a group of investors who pledged in Paris last December to support technologies arising from Mission Innovation with ‘patient capital’. They will make important, long-term investments, instead of backing companies for the quickest profit.

For Mission Innovation to revolutionize our global energy system, more governments must sign up and all countries must meet their 2020 pledges. Some members of the Group of 20 industrialized nations and guests (including Argentina, South Africa and Spain) have not yet joined. September’s G20 Meeting in Hangzhou, China, was a missed opportunity for more countries to make a high-profile commitment. The Mission Innovation secretariat and steering committee must agree on a mechanism for reviewing and tweaking pledges on the basis of actual research spend using fairer baselines and a sensible, shared definition of clean-energy innovation.

Governments need to fund both research into radical new technologies and targeted development with commercial potential. Mission Innovation can use its political goodwill to ensure that countries work closely together to share new clean technology and deploy it at a global scale. Such a change can be achieved only if member countries voluntarily put close collaboration before national priorities.

As economist Mariana Mazzucato put it9, there needs to be a symbiotic relationship — rather than a parasitic one — between state-funded R&D and the private sector. Public innovation funding needs to do three things better: set priorities for private R&D, drive greater collaboration between state-funded early-stage research and privately funded translation, and incentivize the private sector to bring new technologies to market.

We urge governments to use studies of transactions, as illustrated here, to examine what private R&D offers to the clean-energy equation and direct the extra funds from their pledges into areas that are currently underdeveloped.