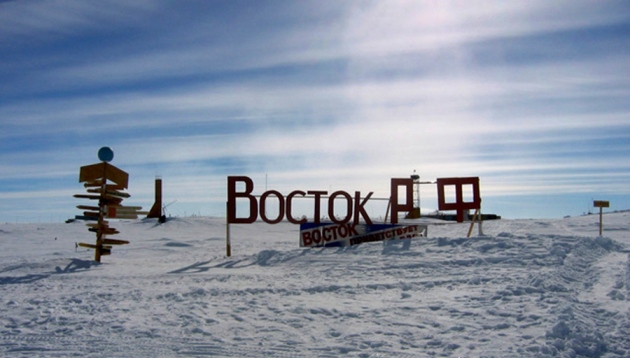 The ice above Antarctica's Lake Vostok contains evidence of complex organisms living in the subglacial waters.

Is Antarctica’s Lake Vostok a prehistoric aquarium populated by exotic fishes and crustaceans? A study now hints at the possibility. But the idea that the pitch-dark lake might host complex animals — as some media reports have suggested — is vastly premature, leading researchers warn.

Nestled beneath a glacier 4,000 metres thick, Lake Vostok is the largest of hundreds of lakes under Antarctica’s ice sheet. A team led by Scott Rogers of Bowling Green State University in Ohio has now looked at ice cores from above Lake Vostok that were extracted in 1998. At the time, no one had reached the actual lake, a feat that was achieved only last year. But the drilling had gone deep enough to reach a layer of ice at the bottom of the sheet that formed as lake water froze.

In those cores, the team found genetic traces of various microbes — and, possibly, of more complex animals. They also found a type of bacterium previously seen only in the guts of fish, they report in PLoS ONE1.

“It appears there might live — or have lived — some fairly complex organisms in Lake Vostok,” says Rogers.

But Sergey Bulat, a Lake Vostok expert at the Petersburg Nuclear Physics Institute in Gatchina, Russia, doubts that any of the cells or DNA fragments in the samples would belong to organisms that might actually exist in the lake. He says that it is very probably that the samples are heavily contaminated with tissue and microbes from the outside world. 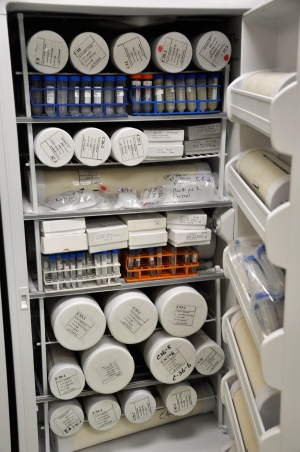 Ice cores from Lake Vostok have been stored in freezers since they were extracted in 1998.

“Their analysis is very questionable,” he says. “It appears to me they have neither run proper controls nor looked at contamination databases to subtract from their results the respective levels of microbial contamination you would expect.”

Rogers does not exclude the possibility of a certain level of contamination. But he insists that the majority of cells and genetic material found in the ice is from organisms that once lived in the lake.

“We decontaminated our samples in rigorous ways,” he says. “And after the sequencing, we subtracted the level of contamination that we found in our controls.”

Bulat says that the study contains other flaws that should raise scepticism. For instance, he says, cells from the ice samples were counted with optical microscopy, which is ineffective at the low cell concentrations reported in the study.

“We didn’t look at droplets of melt water,” counters Rogers. “We centrifuged samples to increase the cell concentration, and then optical microscopy does work quite well. Even so, my students spent weeks and weeks looking for cells.”

Bulat and Rogers have both studied Vostok ice samples taken in the 1990s by a consortium of Russian, French and US Antarctic researchers. In the past, the pair pondered a close collaboration. But their scientific relationship broke over enduring disagreement about the level of contamination of samples.

In March, Bulat himself faced criticism over an unknown species of bacterium his team had discovered in a Lake Vostok ice core drilled last year. Sceptics said that this finding, too, was due to contamination. Bulat is now analysing small DNA traces extracted from actual frozen lake water retrieved by a Russian drilling team in January.

The two researchers' “incredible claims” are difficult to reconcile with the existing body of data on Lake Vostok and the conditions known to be necessary for multicellular life to exist, says Brent Christner, a microbiologist at Louisiana State University in Baton Rouge. Christner has been involved in analysing samples from Lake Whillans, another of Antarctica’s subglacial lakes.

“The surface lakes of Antarctica’s dry valleys have 5 to 7 metres of permanent ice covers, but enough light penetrates to support photosynthesis,” he says. “Nevertheless, the conditions are still too extreme to support anything more complex than a nematode.”

Lake Vostok, he adds, is probably the most extreme ecosystem on Earth. “It will require extraordinary evidence before I entertain the idea of fish, arthropods and sea anemones inhabiting it,” he says.