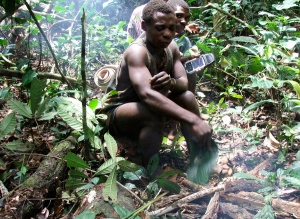 In the Congo Basin, Bayaka pygmies patrol their forests with handheld tracking devices. Using the devices to record instances of poaching, industrial roads and illegal logging, they map their landscape, documenting the course of deforestation and harmful development.

The project is part of an emerging field that its champions describe as the 'new wave' of citizen science. With endeavours ranging from air-pollution assessments in Europe to chimpanzee counting in Tanzania, the next generation of citizen science attempts to make communities active stakeholders in research that affects them, and use their work to push forward policy changes. This is one of the main points of focus of the London Citizen Cyberscience Summit being held this week at the Royal Geographical Society and University College London.

Although researchers have been calling on amateurs and enthusiasts for decades to aid in collecting and processing large volumes of data, the latest approaches aim to enlist the public in helping to shape research questions, says Francois Grey, a physicist at Tsinghua University in Beijing and coordinator of the Citizen Cyberscience Centre in Geneva, Switzerland. Grey, an organizer of the summit, maintains that communities can play a valuable part in setting the agenda for scientific investigations.

Muki Haklay, a geomatic engineer and co-director of the newly formed research group Extreme Citizen Science (ExCiteS) at UCL says that what makes the approach ‘extreme‘ is the vastly expanded definition of public participation. Prior citizen-science projects have tapped into the computing and creative capacity of volunteers, who have tended to be a self-selecting and highly educated group. One of Haklay’s central objectives is to develop methodologies that enable communities — regardless of socioeconomic or educational status — to ask research questions and collect and analyse data to advance local interests.

Working in Deptford, UK, Haklay and his colleagues set up a community initiative to monitor the noise pollution coming from a contentious local scrapyard. As a result of the citizen-generated data, which showed that the operation violated noise limits, the UK Environment Agency revoked the scrapyard’s licence.

Louise Francis, director Mapping for Change, a UCL-based enterprise that aims to help communities develop techniques to improve their local environments, points to the Deptford project as an example of research tailored to meet community needs. She argues that scientific investigators have an obligation to provide continued support to the communities in which they operate. “Deprived communities are the most affected by environmental problems,” she says, but notes that their concerns tend to register as little more than a whisper on science and policy agendas.

But should science be a platform for community activism? In its ‘extremes’, the emerging approach may extend beyond the bounds of formal science, presenting challenges for assuring data quality and unbiased investigations. Grey acknowledges that public participation in what is typically the province of experts makes many scientists uncomfortable. In addition to the scepticism within the scientific community as to the validity and utility of citizen-driven data, Grey says professionals are daunted by the challenges of eliciting interests and responding to concerns. "Scientists get scared," he says in the face of translating community needs into measurable subjects of investigation.

The lack of expert verification in citizen-generated data may also undermine projects geared towards policy change or large-scale intervention. Lilian Pintea, vice-president of conservation science at the Jane Goodall Institute in Washington DC, says that community-based data provide immediate confirmation of identified problems and can inform land-use and planning policies. However, he observes that even with the express goal of influencing environmental development, figuring out how to use the findings "presents a considerable challenge”.

One solution may be to develop a “science of citizen science”, suggests Francois Taddei, a molecular geneticist at the Centre for Research and Interdisciplinarity at Paris Descartes University. As the field develops, he says, researchers will need to figure out the optimal division of labour between citizens and professionals. The question is evolving, he says, owing to a slowly developing understanding that expert knowledge does not necessarily trump collective intelligence.

For Jerome Lewis, an anthropologist at UCL and co-director of ExCiteS, tapping into collective intelligence is central to the future of scientific investigations. The lead researcher of the Congo Basin project, Lewis says that collaborative citizen science is developing “just in time”. By yoking local knowledge to international expertise, emerging collaborations can promote conservation and sustainable development. “Marginal communities will contribute to science just as the world is about to melt down. This will change everything.”