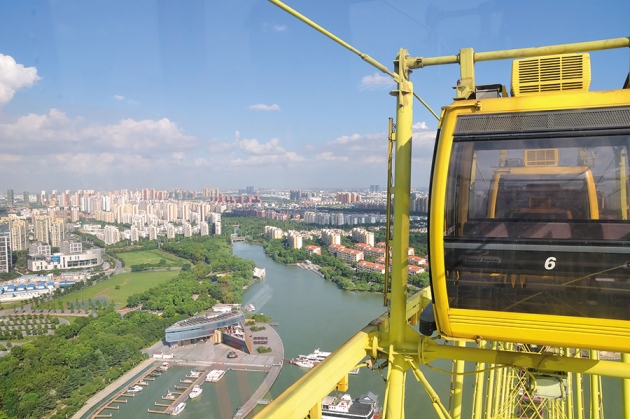 The Suzhou New District was one of the first industrial parks in China's circular-economy programme.

China's consumption of the world's resources is reaching crisis levels. To produce 46% of global aluminium, 50% of steel and 60% of the world's cement1 in 2011, it consumed more raw materials than the 34 countries of the Organisation for Economic Co-operation and Development (OECD) combined: 25.2 billion tonnes. 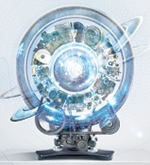 The nation's resource use is inefficient. China requires 2.5 kilograms of materials to generate US$1 of gross domestic product (GDP) compared with 0.54 kilograms in OECD countries (in 2005 dollars, adjusted for purchasing power parity). And it is wasteful. In 2014, China generated 3.2 billion tonnes of industrial solid waste, only 2 billion tonnes of which was recovered by recycling, composting, incineration or reuse. By comparison, firms and households in the 28 countries of the European Union generated 2.5 billion tonnes of waste in 2012, of which 1 billion was recycled or used for energy. In 2025, China is expected to produce almost one-quarter of the world's municipal solid waste2.

Unchecked, such levels of consumption and waste will strain the nation and the planet. In December 2015, a landslide at a waste dump in Shenzhen killed 73 people. China has also seen an increasing number of protests by local residents over waste-incineration projects in recent years. The geopolitical costs could soar as China becomes more dependent on imported resources from unstable parts of the world. Fuels and minerals accounted for 30% of the total cost of China's imports in 2012, compared with just over 5% in 1990.

The country is taking action. For the past decade, China has led the world in promoting the recirculation of waste materials through setting targets and adopting policies, financial measures and legislation. The ultimate goal is a 'circular economy' — closing industrial loops to turn outputs from one manufacturer into inputs for another. This approach reduces the consumption of virgin materials and the generation of waste.

Progress has been modest and the obstacles to transforming the economy are formidable. Western countries have struggled for decades to get companies to collaborate along a supply chain. China has the advantage that more than half of its manufacturing activities are conducted in industrial parks and export processing zones. Targeting these parks is beginning to slash the intensity of China's resource use.

For example, the Suzhou New District is a 52-square-kilometre region for technological and industrial development near Shanghai, where around 4,000 manufacturing firms operate. There, manufacturers of printed circuit boards use copper that is recovered from waste from elsewhere in the park, rather than using virgin copper produced by mining firms3.

No other country has such ambitions. Germany and Japan have comprehensive plans for recycling (through Germany's Closed Substance Cycle and Waste Management Act of 1996 and Japan's 2000 Fundamental Law for Establishing a Sound Material-cycle Society). The European Commission announced a Circular Economy Package in December 2015 but has yet to implement it.

The United States has hundreds of corporate recycling initiatives (including those of the machinery company Caterpillar and Interface, a carpet manufacturer). The United States also has a handful of regional programmes such as the Zero Waste scheme in San Francisco, California. Other initiatives involving closing loops to attain 'industrial symbiosis'4 — in which waste products of one firm become the raw materials of another — are in place in Yokohama, Japan; in Ulsan, South Korea; and in Kwinana, Australia5. All these are limited in their impacts and scale.

Chinese interest in the circular economy was piqued in the 1990s6 by Germany and Japan's recycling laws. In 2005, China's State Council issued a policy paper (see go.nature.com/cnozhg; in Chinese) recognizing the economic and environmental risks of the nation's heavy resource exploitation, and acknowledging the circular economy as the principal means of dealing with them. The country's planning agency, the National Development and Reform Commission (NDRC) and bodies such as the Ministry of Environmental Protection have since developed circular-economy principles and promoted exemplars of industrial symbiosis, such as at the Rizhao Economic and Technology Development Zone7.

Circular economy: Getting the circulation going

Taxation, fiscal, pricing and industrial policies were introduced. A fund was allocated to support the conversion of industrial parks into eco-industrial agglomerations. Tax breaks were provided to enterprises in the reuse sector. To finance the initiatives through concessionary loans or direct capital financing, the NDRC joined with financial regulators including China's central bank and its banking and securities regulatory commissions.

A whole chapter in the country's 11th Five-Year Plan (for 2006–10) was devoted to the circular economy. And a 2008 circular-economy 'promotion law' demanded that local and provincial governments consider such issues in their investment and development strategies. Targets were enacted for the coal, steel, electronics, chemical and petrochemical industries. The circular economy was upgraded to a national development strategy in the 12th Five-Year Plan (2011–15).

“China has led the world in promoting the recirculation of waste materials.”

Objectives included reusing 72% of industrial solid waste by 2015 and raising resource productivity (economic output per unit resources used) by 15%. The plan laid out a three-pronged '10–100–1,000' strategy: 10 major programmes focusing on recycling industrial wastes, conversion of industrial parks, remanufacturing, urban mining, and the development of waste-collection and recycling systems; 100 demonstration cities such as Suzhou and Guangzhou; and 1,000 demonstration enterprises or industrial parks nationwide. In 2012, the NDRC and the finance ministry called for 50% of national industrial parks and 30% of provincial ones to complete circular-economy transformation initiatives by 2015, with an aim of achieving close to zero discharge of pollutants.

In 2013, the State Council released a national strategy for achieving a circular economy — the first such strategy in the world. Further targets for 2015 included increasing energy productivity (GDP per unit energy) by 18.5% relative to 2010, raising water productivity by 43%, and for the output of the recycling industry to reach 1.8 trillion yuan (US$276 billion) compared with 1 trillion yuan in 2010. Others include reusing at least 75% of coal gangue (worthless rock present in deposits) from coal mining or 70% of pulverized fuel ash, a product of coal combustion, from electricity generation.

Some of these targets have been extended in the 13th Five Year Plan, which was published this month.

By 2013, resource intensity and waste intensity had improved by 34.7% and 46.5%, respectively, a clear sign that resource consumption (of metal, water, energy and biomass) is decoupling from economic growth in relative terms. The treatment rate of pollution, including sewage, the decontamination of urban residential waste and the reduction of major pollutants, also increased, by 74.6%. The recycling and reuse of waste improved more slowly, by 8.2%. A circular-economy development index created by the statistics bureau aggregating all these indicators grew from 100 in 2005 to 137.6 in 2013.

OECD statistics reveal that China's resource intensity fell: from 4.3 kilograms of materials per unit GDP in 1990 to 2.5 kilograms in 2011. However, China's overall resource consumption rose fivefold during these two decades, from 5.4 billion tonnes to 25.2 billion tonnes, as a result of its economic boom (see 'Consumption problem').

The Suzhou New District (SND) is an exemplar of circular-economy initiatives. In 2005, it was selected as one of the first 13 industrial parks to participate in China's national circular-economy pilot programme. In 2008, it was one of three national eco-industrial park demonstration sites in the country, along with the nearby China–Singapore Suzhou Industrial Park and the Tianjin Economic-Technological Development Area.

The SND is larger than Western examples of industrial symbiosis such as Kalundborg in Denmark, which was the first case of closed-loop recycling since the 1980s. Kalundborg involves a dozen or so firms sharing energy, water, steam and waste-recycling processes. By 2014, the SND hosted more than 16,000 enterprises and almost 4,000 manufacturing firms, many in IT, electronics, biotech and medical-device manufacturing. The total output of the industrial sector of the SND (including manufacturing, mining and utilities) was 288 billion yuan in 2015.

Initiatives set out to plug gaps in chains of industries within industrial parks. For example, the SND administration identified the recycling and recirculation of metal resources such as gold and copper as a gap in the park's printed-circuit-board supply chain. A venture was formed with Dowa Metal in Japan to establish an advanced metal-recycling business in the SND. Waste etching solution that is generated in copper laminating and circuit-board manufacturing in the SND is treated and returned by others based in the park. Electronic-waste companies such as Dowa reclaim the copper and water from the sludge created by circuit-board processing.

In other examples, a producer of kaolin (a type of clay) turns residues from mining into inputs for the production of sulfuric acid and construction materials; a paper manufacturer takes waste ammonia from a chemical company to use for desulfurization in its process; and industrial water recycling is undertaken on site.

The main obstacle is getting firms linked by supply chains to cooperate in turning outputs into inputs — as in the copper-extraction example. Some observers might see China's top-down approach to such issues as problematic, but it is clear that the tradition of managing industrial parks through local institutions and governments is able to cut through the problem by offering rewards to firms that collaborate. Thus the issue is reframed from one involving individual firms to one that involves their collective decisions.

“Some industries lend themselves to circular initiatives more than others.”

The economic benefits are clear. Recycled, regenerated and locally sourced raw materials are usually cheaper, increasing profits. State involvement in the economy turns out to be an advantage, and underpins how progress depends on countries' abilities to implement as well as develop industrial policies.

Some industries lend themselves to circular initiatives more than others. For example, recirculation of metal scrap is straightforward, but extracting metal from industrial sludge is more chemically demanding. China's move away from primary industries to secondary ones, such as solar-panel manufacturing, will reap benefits from the circular economy. And increasing reliance on home-regenerated materials rather than imports will increase the country's resource security.

China must still do much more. It needs a national goal and road map to achieve a level of resource intensity that is similar to that of OECD countries (currently around 0.5 kilograms per dollar of GDP). And it must champion regional and provincial achievements, giving rewards to eco-industrial parks that perform best. Data should be reported regularly. SND data are five years old, for example. Seeing the fiscal benefits, companies should have incentives to release accurate data.

Better circular-economy metrics need to be developed. The circular-economy index of China's statistics bureau needs clarification on what it means and what it measures. The OECD should similarly draw up reporting guidelines for all countries to follow. Researchers need to collaborate with China to improve metrics and conduct case studies of industrial symbiosis.

Mainstream economics perpetuates linear thinking with concepts such as GDP and the use of GDP growth as a sole performance measure for national economies. Performance measures such as circulation of resources need to be introduced into economists' models, to create an interest in the real flow of resources that underpins abstractions such as income and wealth.

In our view, the only solution to the world's resource-security problem is to move away from the linear economy and embrace the circular economy. China's strategies are a significant step forwards in bridging the global gap between economic and ecological sustainability.