For the first time, health officials in West Africa have begun a vaccination campaign to try to control cholera during an active epidemic.

In collaboration with the Ministry of Health in Guinea, the charity Médecins Sans Frontières (MSF; also known as Doctors Without Borders) has been administering the cholera vaccine Shanchol in the region of Boffa, 150 kilometres northwest of the country’s capital, Conakry. The programme began in late April, with patients receiving a two-dose oral vaccine. In total, almost 150,000 people received at least one dose of vaccine, and just over 110,000 people received a second dose. 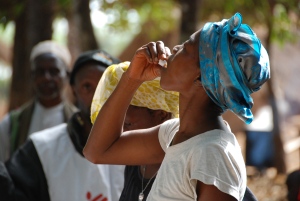 Iza Ciglenecki, project manager for diarrhoeal diseases at MSF, ran the campaign in Guinea. She hopes that the results will lead to more widespread use of the vaccine in epidemics. “Until very recently, no one was using this as an extra tool to control cholera,” she says. “We hope to add to the evidence base regarding this vaccine to help develop an intervention criteria for the control of cholera in outbreaks.”

The programme follows on the heels of two modelling studies, published in the journal PLoS Neglected Tropical Diseases last year, which suggested that cholera vaccines were beneficial after outbreaks occurred in Vietnam and Zimbabwe1, 2. But more information is needed on how and when to administer the vaccine, explains Ciglenecki.

Surveillance systems in Boffa have been strengthened to enable the MSF to monitor the Guinean epidemic and to assess the effectiveness of the vaccine over the next six months.

William Perea of the Control of Epidemic Diseases Unit at the World Health Organization (WHO) in Geneva, Switzerland, is watching the intervention closely. Alongside other control measures such as cleaning up the water supply, the WHO now recommends using available cholera vaccines to control outbreaks. Opinions were divided among vaccination experts at the start of the 2010 cholera epidemic in Haiti regarding vaccine efficacy and availability. There were also concerns that time and resources would be better spent on improving water and sanitation systems than on vaccines (see ‘Would cholera vaccines have helped in Haiti?’).

The real issue now is not the vaccine, but the mechanism by which to deliver a vaccination programme in response to an outbreak, says Perea. “We know enough about the vaccine to say it is very likely to work, but in the field where you have to respond quickly, other elements will come into consideration,” he says. “So we need to make sure we collect data and do the necessary work to make sure that the cholera vaccine will have an impact in these situations. It is time to stop talking and time to start acting.”

A WHO technical group has recommended that cholera vaccine is stockpiled ready for use in response to outbreaks, says Perea. To fund this, the organization needs to gain support from major donors, such as the GAVI Alliance in Geneva and the Bill & Melinda Gates Foundation in Seattle, Washington. Perea hopes that a stockpile will be established by January 2013, but acknowledged that it may take longer.

Meanwhile, in Haiti, the organization Partners in Health, headquartered in Boston, Massachusetts, has implemented a cholera vaccination programme to protect the thousands of people still at risk of cholera from the epidemic that broke out in the wake of the 2010 earthquake. After several delays, the programme started in April this year. Vaccine uptake has been good so far, and the results of the programme will be known by the end of September, according to Louise Ivers, chief of mission for Partners in Health in Haiti.

Ivers is excited about the MSF vaccination campaign in Guinea and hopes that the two organizations can learn from each other. “We have a vaccine that is pretty good but it is not used,” she says. “So the more information we can gather to help inform public health officials and ministries of health on the use of vaccine in the field, the better”.

Ivers explains that the most important objectives are to show that a sufficient number of patients will come back for their second dose of vaccine, and that the logistical and supply systems are able to deliver the vaccines successfully.

Cholera experts are agreed on the need to tackle the root of the problem: improving water and sanitation systems in countries where these are lacking. But because this can take a significant amount of investment, in terms of time and resources, a vaccine can offer protection during an outbreak. “It’s a good tool, we have to use it,” says Perea.