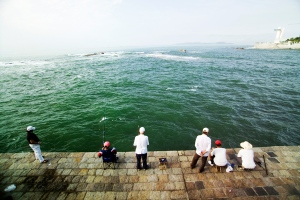 The results of China’s eight-year national marine survey paint a disturbing picture of its coastal environment.

The survey, launched in 2004 by the Chinese State Oceanic Administration (SOA) and completed last month, is the country’s “most comprehensive marine survey so far,” says Gao Kunshan, a marine ecologist at Xiamen University, who was not involved in the project.

It “provides a basis to protect and manage marine resources,” Liu Xigui, chief of the SOA, told China National Radio.

But the unpublished survey shows that those resources are in dire straits, according to Xinhua, China's state news agency. Roughly 90% of coastal cities suffer from intermittent water shortages. China’s mangrove swamps have decreased in area by 73% and coral reefs by 80% since the 1950s, and coastal wetlands have shrunk by 57%.

Nearly one-third of the loss in coastal wetland was due to land reclamation. “Future land-reclamation projects need to assessed more carefully,” says the report.

The past decade has seen a continuous rise in pollution discharged into estuaries, and three-quarters of those discharges failed to meet regulatory limits. Some 48 estuaries are contaminated with heavy metals, the insecticide dichlorodiphenyltrichloroethane (DDT) and petroleum hydrocarbons.

These pollutants, together with run-off of chemical fertilizers and animal manure from farmland, have resulted in the build-up of excessive nutrients and harmful algal blooms in coastal waters, says Sun Song, director of Chinese Academy of Sciences’ Institute of Oceanology in Qingdao.

The survey shows that over the past 20 years, China’s coastal waters have seen an average of 83 ‘red tides’ a year — harmful algal blooms characterised by the red pigment of the dominant phytoplankton species — mostly in the East China Sea. ‘Green tides’, dominated by green plankton, occur mostly in the Yellow Sea and hit the economy harder. In 2008, the direct economic loss was 1.3 billion Chinese yuan (US$208 million). In 2009, China was hit by ‘brown tides’, which kill shellfish (see 'China third country to be hit by ‘brown tide’').

Given the dire condition of China’s coastal environment, the report warns of a general decline in coastal fishery resources. For instance, krill in the East China Sea are on the brink of extinction, with devastating knock-on effects for small yellow croakers, which feed on them and have dropped markedly in numbers in the past decade.

Sun commends the SOA’s efforts, but says that the broad-brush survey does not go far enough in assessing coastal ecosystems. “It doesn’t give a clear picture of how ecosystems are changing,” he says.

For example, preliminary research by Gao shows that coastal waters near Xiamen are becoming more acidic, which makes life more difficult for phytoplankton and has knock-on effects on the structure of the ecosystem. But it’s unclear how widespread or serious the problem is, because studies so far are piecemeal. “There is an urgent need to set up a long-term monitoring network to assess changes in coastal water chemistry and their impact on marine ecosystems,” says Gao.

This kind of information is “directly relevant to fishery resources and crucial for our understanding of what is causing the changes,” says Sun. “Without such knowledge, there is little we can say about mitigation policies.”

The project had another purpose besides surveying marine resources. Many countries use scientific surveys to shore up territorial claims, and China is no different. The survey claims 10,312 islands as Chinese territory, including Taiwan and the Japanese-controlled Senkaku Islands, known as the Diaoyu Islands in China.