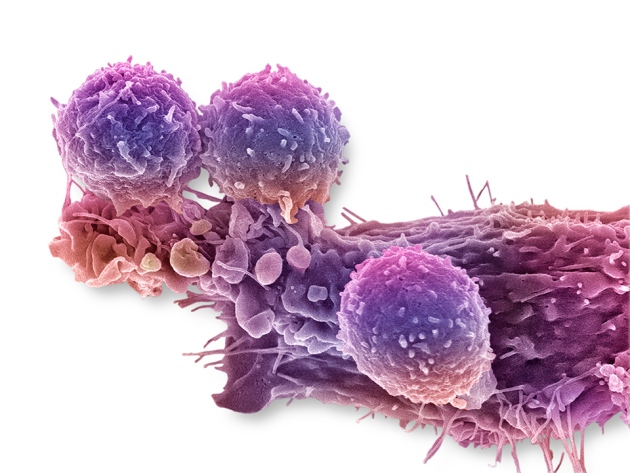 Genes in immune cells will be edited in an effort to turbocharge their attack on tumours.

Chinese scientists are on the verge of being first in the world to inject people with cells modified using the CRISPR–Cas9 gene-editing technique.

A team led by Lu You, an oncologist at Sichuan University’s West China Hospital in Chengdu, plans to start testing such cells in people with lung cancer next month. The clinical trial received ethical approval from the hospital's review board on 6 July.

“It’s an exciting step forward,” says Carl June, a clinical researcher in immunotherapy at the University of Pennsylvania in Philadelphia.

First CRISPR clinical trial gets green light from US panel

There have been a number of human clinical trials using an alternative gene-editing technique, including one led by June, that have helped patients combat HIV. June is also a scientific adviser on a planned US trial that would also use CRISPR–Cas9-modified cells for the treatment of cancer.

Last month, an advisory panel of the US National Institutes of Health (NIH) approved that project. But the trial also requires a green light from the US Food and Drug Administration (FDA) and a university review board. The US researchers have said they could start their clinical trial by the end of this year.

The Chinese trial will enrol patients who have metastatic non-small cell lung cancer and for whom chemotherapy, radiation therapy and other treatments have failed. “Treatment options are very limited,” says Lu. “This technique is of great promise in bringing benefits to patients, especially the cancer patients whom we treat every day.”

Lu’s team will extract immune cells called T cells from the blood of the enrolled patients, and then use CRISPR–Cas9 technology — which pairs a molecular guide able to identify specific genetic sequences on a chromosome with an enzyme that can snip the chromosome at that spot — to knock out a gene in the cells. The gene encodes a protein called PD-1 that normally acts as a check on the cell’s capacity to launch an immune response, to prevent it from attacking healthy cells.

The gene-edited cells will then be multiplied in the lab and re-introduced into the patient’s bloodstream. The engineered cells will circulate and, the team hopes, home in on the cancer, says Lu. The planned US trial similarly intends to knock out the gene for PD-1, and it will also knock out a second gene and insert a third before the cells are re-introduced into the patient.

Last year, the FDA approved for use against lung cancer two antibody-based therapies that block PD-1. But it is difficult to predict for any given patient to what extent these antibodies will block PD-1 and activate the immune response.

By contrast, knocking out the gene blocks PD-1 with greater certainty, while multiplying the cells increases the chance of a response. “It will be much more powerful than the antibodies," says Timothy Chan, who does clinical research in immunotherapy at Memorial Sloan Kettering Cancer Center in New York City.

It is well known that CRISPR can result in gene edits at the wrong place in the genome, with potentially harmful effects. Chengdu MedGenCell, a biotechnology company and a collaborator on the trial, will validate the cells to ensure that the correct genes are knocked out before the cells are re-introduced into the patients, says oncologist Lei Deng of West China Hospital, who is a member of Lu’s team.

Because the technique targets T cells, which are involved in various kinds of immune responses, in a non-specific way, Chan worries that the approach might induce an excessive autoimmune response in which the cells would start attacking the gut, or adrenaline glands or other normal tissue. “All the T cells — everything will be active. That will be a concern,” says Chan.

He suggests, instead, that the team take T cells from the site of the tumour, because they would already be specialized for attacking cancer. But Deng says that the lung-cancer tumours targeted by their trial are not easily accessible. He also says that the team is reassured by the FDA-approved antibody therapies, which did not show a high rate of autoimmune response.

The phase I trial is designed foremost to test whether the approach is safe. It will examine the effects of three different dosage regimens on ten people, and, Deng says, the team plans to proceed slowly, increasing the dosage gradually and starting with just one patient, who will be monitored closely for side effects. But the researchers will also closely watch markers in the blood that would indicate that the treatment is working.

Lu says that the review process, which took half a year, required that the team invest a lot of time and human resources, including close communication with the hospital’s internal review board (IRB). “There was a lot of back and forth,” he says. The NIH’s approval of the other CRISPR trial “strengthened ours and our IRB’s confidence in this study”, he adds.

China has had a reputation for moving fast — sometimes too fast — with CRISPR, says Tetsuya Ishii, a bioethicist at Hokkaido University in Sapporo, Japan.

Bioethics in China: No wild east

According to Lu, his team was able to move fast because they are experienced with clinical trials of cancer treatments.

June is not surprised that a Chinese group would jump out in front on a trial such as this: “China places a high priority on biomedical research,” he says.

“I hope we are the first," says Lu. "And more importantly, I hope we can get positive data from the trial.”