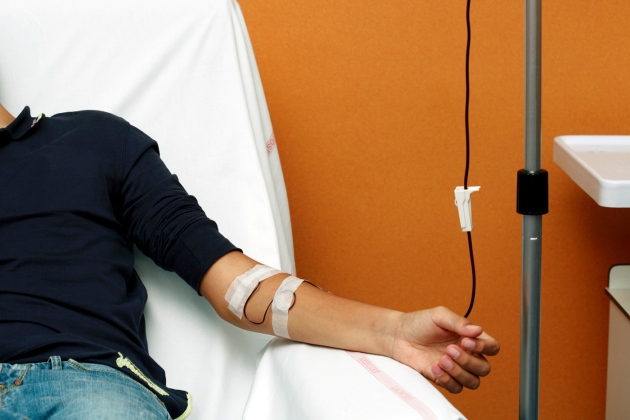 Fixing the genetic mutation linked to β-thalassaemia would save affected individuals from having to get life-sustaining blood transfusions.

A team in China has taken a new approach to fixing disease genes in human embryos. The researchers created cloned embryos with a genetic mutation for a potentially fatal blood disorder, and then precisely corrected the DNA to show how the condition might be prevented at the earliest stages of development.

The report, published on 23 September in Protein & Cell1, is the latest in a series of experiments to edit genes in human embryos. And it employs an impressive series of innovations, scientists say. Rather than replacing entire sections of genes, the team, led by Junjiu Huang at Sun Yat-sen University in Guangzhou, China, tweaked individual DNA letters, or bases, using a precision gene-editing technology developed in the United States2.

Huang’s team is also the first to edit out the mutation responsible for a ‘recessive’ disease: one caused by having two faulty copies of a gene. Because it would be difficult for researchers to find dozens of embryos that all have this rare double mutation, the team worked around this roadblock by developing embryonic clones from their patient’s skin cells.

“I thought, ‘Why would they do cloning?’ Then I read the paper, and thought, ‘Wow, that’s fascinating,’” says Shoukhrat Mitalipov, a reproductive-biology specialist at the Oregon Health and Science University in Portland who pioneered human cloning and also works on gene editing in embryos. “I would not have thought to do this.”

Scientists around the world have now published eight studies reporting gene editing in human embryos, five in the past two months. None have permitted the embryos to grow beyond 14 days, and the research has had different purposes: some to test gene-editing technologies; others to edit various disease-related genes; and some to unravel the mechanisms behind early embryonic development. Huang’s team led the first report, published in April 2015, in which they used the CRISPR–Cas9 enzyme complex to snip chromosomes at specific locations, excise DNA and replace it with other genetic material3.

In the latest study1, Huang’s team used ‘base editing’, a modification of CRISPR–Cas9. It guides an enzyme to specific gene sequences, but does not cut the DNA. Instead, the Cas9 enzyme is disabled and tethered to another enzyme that can swap out individual DNA base pairs. So far, this technique can convert guanine (‘G’) to adenine (‘A’), and cytosine (‘C’) to thymine (‘T’). Hundreds of genetic diseases are caused by single-base changes, or ‘point mutations’, and so editing of this sort at the embryonic stage could potentially stave off such conditions.

Huang’s team chose one mutation common in the Chinese population: a switch from an A to a G at a certain spot in the HBB gene, which can lead to β-thalassaemia, a recessive blood disorder associated with severe or fatal anaemia. Researchers generally source embryos from in vitro fertilization (IVF) clinics, but it’s rare for these facilities to have embryos with two copies of the same rare mutation. So Huang’s team found a person with the blood disorder, extracted their skin cells and used cloning techniques to develop embryos with the same genetic makeup.

The researchers reported that in 8 of 20 cloned embryos, they were able to convert the errant G back into an A in one or both copies of the gene. (Repairing only one copy might be enough to cure a recessive disease.) That rate is too low for the technique to be considered for clinical use, but the efficiency was high relative to that achieved in other gene-editing studies. “The repair rate is pretty good, and certainly promising,” says Gaetan Burgio, a geneticist at the Australian National University in Canberra. “Our study opens new avenues for therapy of β-thalassaemia and other inherited diseases,” says Huang.

But scientists caution that not all cells in the eight embryos were fixed. Such embryos are ‘mosaic’, meaning that they have a patchwork of cells with different genetic make-ups, which is potentially dangerous. “It looks like solid work, but highlights that the problem of mosaicism remains a challenge for any form of gene editing in the human embryo,” says Dieter Egli, a stem-cell biologist at Columbia University in New York City.

Some scientists also question whether Huang’s team looked thoroughly enough for unintended genetic changes, called off-target effects, that might have been caused by the base-editing procedure, although the authors reported that none were found.

Huang says future experiments will be more comprehensive, but that this first study was a successful proof of principle that the base-editing technique can be used to correct a disease mutation in a human embryo. It may be that conventional CRISPR–Cas9 cannot fix embryos when both copies are faulty, although this isn’t yet clear. In August, for instance, Mitalipov’s team reported using CRISPR–Cas9 to repair a mutation in a gene that can cause a potentially deadly heart disorder, by using the other, healthy copy of the gene as a template4.

In the future, Huang says, he plans to ask for oocytes and sperm from donors who have one mutated copy of the gene — and so are unaffected by the condition, but are carriers of the disease — and use these to produce embryos. Some of those embryos would have two mutated copies, and some one, but Huang wants to edit both types. That raises the contentious idea that gene editing might be used not only to prevent severe disease, but also to eliminate the chance of people becoming carriers of the disorder. “Base editing can repair the mutant site and block it from being passed on to the next generation,” he says.