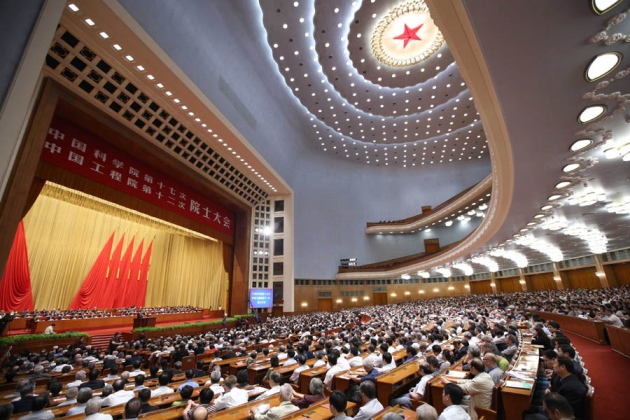 The Chinese Academy of Sciences, which employs 60,000 people, opens its 2014 congress in Beijing.

Change is coming to the institute that has been at the heart of China’s scientific development since the communist state began. The Chinese Academy of Sciences (CAS) is making unprecedented structural reforms to foster collaboration and turbocharge research. Proponents say that the initiative will make China a world leader in areas from neuroscience to particle physics; detractors question whether modern China needs such a sprawling organization at all.

The CAS, headquartered in Beijing, employs 60,000 people, and has 104 research institutes and a budget of roughly 42 billion renminbi (US$6.8 billion). Just under half comes from the government, to cover overhead costs and salaries; the rest comes from competitive government grants. It is “the biggest reform in the academy’s history”, CAS president Chunli Bai told Nature’s news team in an interview on 22 September.

The initiative — which was designed by Bai — follows an appeal by Chinese president Xi Jinping in July 2013 for the CAS to become a world leader in science. Although China’s spending on science now outpaces that of all countries except the United States, many agree that the country is not getting a good return on its investment, in terms of both basic-science breakthroughs and commercialization of those findings.

Some underperformance might result from low salaries for scientists — including those at the CAS, says Bai — who scramble to supplement their incomes with multiple grants. “Their research becomes very fragmented,” he said.

Scientists also shy away from collaborations because co-authorship dilutes their achievements in the eyes of grant committees. At a conference in 2012, Bai discovered that researchers across 20 different CAS institutes were working on related projects, but often did not know each other — duplicating work and missing opportunities to share knowledge. He also notes that they had little interest in discussing applications with industry representatives.

To deal with these issues, Bai has grouped research into four categories, and promising CAS scientists are being selected to work together under them. They will see their salaries jump, relying on grants for only 30% of their income, rather than for 70%. The idea is to encourage scientists to collaborate on fewer, large problems, rather than to churn out marginal advances in disparate projects that can be used to seek multiple grants. “Teamwork is the key word,” says Mu-Ming Poo, director of the CAS Institute of Neuroscience in Shanghai.

The first category is devoted to establishing centres of excellence focused on basic science, and will target areas in which China has a chance to dominate. One team, for which Poo has already selected 40 researchers from 11 different CAS institutes, specializes in brain science — one goal is to produce a transgenic monkey model that could be useful for neurodegenerative-disease research.

Tandong Yao, director of the Institute of Tibetan Plateau Research in Beijing will head another centre focused on the seismically active plateau: his team wants to probe how the crust underneath deformed over time. Other centres will focus on particle physics, thorium-based molten-salt reactors, and quantum information. The plan is to take the count up to 20 centres by 2020.

A second category will target areas with underdeveloped commercial potential, including microsatellites, marine information technology and drug development. A third category will establish collaborations around large-scale facilities: a synchrotron and a protein-science centre, for example, both in Shanghai, will be linked to make it easier to carry out high-precision protein studies and support academic and industry researchers, including some from abroad.

The fourth category, still in its design phase, will be devoted to initiatives that assist local development and sustainability. Its first will probably focus on work by the Institute of Mountain Hazards and Environment in Chengdu, which could help communities to prepare for natural disasters such as landslides.

But not everyone agrees that the changes tackle the key problems at the CAS. One Chinese university scientist, who is familiar with the reforms and did not want to be identified, says that the source of the problems is that the CAS hires too many young scientists who then go through little or no review, and essentially receive tenure without having to prove themselves. Bai counters that the opportunities offered by his initiatives will “encourage the underperformers to be better”. He says that he has steered away from a US-style system in which underperformers can be fired: “It is a reform with Chinese characteristics.”

Cong Cao, a science-policy specialist at the University of Nottingham, UK, says that the CAS is too big and unwieldy. “There’s no organization in the world with so many functions,” he says. He says that universities and individual research institutes, which are increasingly competing with the CAS for leading scientists, can offer a better management environment for scientists. “There probably is no reason for the CAS in China right now.”

But Bai uses the same trait to justify the academy’s existence: he argues that it allows the CAS to make wide contributions to China’s development. “You have to understand the history,” he says.