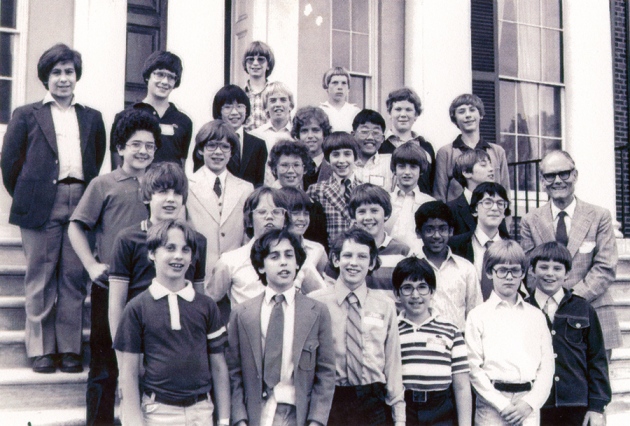 Candidates for the Study of Mathematically Precocious Youth in 1983. Study data are in use at China’s BGI.

The US adolescents who signed up for the Study of Mathematically Precocious Youth (SMPY) in the 1970s were the smartest of the smart, with mathematical and verbal-reasoning skills within the top 1% of the population. Now, researchers at BGI (formerly the Beijing Genomics Institute) in Shenzhen, China, the largest gene-sequencing facility in the world, are searching for the quirks of DNA that may contribute to such gifts. Plunging into an area that is littered with failures and riven with controversy, the researchers are scouring the genomes of 1,600 of these high-fliers in an ambitious project to find the first common genetic variants associated with human intelligence.

The project, which was launched in August 2012 and is slated to begin data analysis in the next few months, has spawned wild accusations of eugenics plots, as well as more measured objections by social scientists who view such research as a distraction from pressing societal issues. Some geneticists, however, take issue with the study for a different reason. They say that it is highly unlikely to find anything of interest — because the sample size is too small and intelligence is too complex.

Earlier large studies with the same goal have failed. But scientists from BGI’s Cognitive Genomics group hope that their super-smart sample will give them an edge, because it should be enriched with bits of DNA that confer effects on intelligence. “An exceptional person gets you an order of magnitude more statistical power than if you took random people from the population — I’d say we have a fighting chance,” says Stephen Hsu, a theoretical physicist from Michigan State University in East Lansing, who acts as a scientific adviser to BGI and is one of the project’s leaders.

“If they think they’re likely to get much useful data out of this study, they’re almost certainly wrong,” says Daniel MacArthur, a geneticist at Massachusetts General Hospital in Boston. He is not against intelligence studies in principle, despite the visceral reactions they provoke in some people. “Studying intelligence is useful for understanding cognitive function, or diseases” that affect it, he says. But he questions whether the study will work.

Intelligence has a substantial but mysterious genetic component1. Studies in twins indicate that genetic factors should explain significantly more than half of the variation in adult general intelligence — the abstract quantity measured in IQ tests. This, in turn, correlates well with attributes such as academic achievement and income. Although geneticists have identified hundreds of genes in which a single mutation can lead to developmental difficulties, the common genetic variants that lie behind normal diversity in intelligence remain elusive. It is widely assumed that, as is the case for traits such as height, there are thousands of such variants, the small effects of which combine to influence mental abilities.

So far, the quest to identify intelligence-linked variants has thrown up only null results and false positives2, even after large, well-designed studies. In 2010, a team led by Robert Plomin, a behavioural geneticist at King’s College London, failed to find a single intelligence-associated variant, even after examining more than 350,000 variations in single DNA letters, or SNPs, across the genomes of 7,900 children3.

After this, Plomin switched his strategy to focus on only the brightest minds. He collected DNA samples from 2,000 of the SMPY’s recruits, whose average IQ is above 150 — surpassing the average of Nobel laureates and putting them three standard deviations above the general population’s mean score of 100. “In the earlier study, I bet we didn’t have more than two or three people with an IQ that high,” says Plomin, who has been studying the heritability of intelligence since the 1970s.

At the same time, BGI had hit on a similar strategy and was trying to recruit the brightest teenagers for a new study. Although Hsu is not a geneticist himself, he has a long-standing interest in intelligence. He suggested that BGI should recruit gifted individuals from science and mathematics olympiads — international competitions for school pupils — but when that approach failed, Hsu set up a website to attract volunteers of ‘high cognitive ability’.

Then he heard about Plomin’s sample. The two struck up a partnership: Plomin supplied DNA samples from 1,600 SMPY recruits, and Hsu added samples from more than 500 people recruited — albeit less selectively — through his website, which asked potential donors to submit evidence of their brain power in the form of impressive olympiad results, high scores on standardized tests or diplomas from leading universities. “We’re at the bleeding edge,” says Hsu. “No one has a sample like this.”

BGI is sequencing the genomes at low coverage — scanning each DNA letter an average of only four or five times — and comparing them with what Hsu says will be in excess of 4,000 controls from the UK10K project, which aims to sequence the genomes of 10,000 UK residents. Because these people were not selected for intelligence, they should display a range of IQs. The researchers at BGI will begin by using commercially available tools to look at common SNPs before moving on to rarer ones, and to variations in the number of copies of different DNA segments.

“If they think they’re likely to get much useful data out of this study, they’re almost certainly wrong.”

Plomin is optimistic about the study’s chances: “I’m not expecting to find a lot but I’d be happy with one solid finding,” he says. But MacArthur notes that searches for genes connected with schizophrenia have had similar sample sizes and compared people at the far end of the risk spectrum (extremely likely to get the disease) with those in the middle (of average risk). Yet the efforts came up empty-handed. If the genetics of intelligence are similar to those of schizophrenia or height, MacArthur says, the team needs at least 10,000 cases and 10,000 controls.

Sample size could be an even greater handicap if it turns out that intelligence is not actually the result of multiple variants, each with a small effect. Plomin likens a super-smart brain to a finely tuned race car: “You need many positive things going for you and you can’t afford many negatives,” he says.

But this may not be true, says Kevin Mitchell, a neurogeneticist from Trinity College Dublin. “Intellectual disability can be caused by a mutation in any one of a large number of genes — we don’t know if that is true for exceptional genius,” he says. If rare mutations produce extremes in intelligence just as they do extremes in height, the BGI study will be unlikely to find them.

Both Plomin and Hsu are passionate enough to take a shot, although their goals differ. Hsu is focused on the genetic basis of extreme intelligence. “My primary interest is why Einstein or Hawking is different from a normal person,” he says. Plomin is sequencing high-performers as a way of homing in on genes that affect intelligence in the broader population. If enough of these are discovered, he thinks that it may be possible to predict someone’s intelligence from an early age, and to offer help to children who are at risk of learning disabilities.

Publicity around the project has spawned some extreme reactions. An article published in March entitled ‘China is Engineering Genius Babies’ in the US arts and culture magazine VICE branded the study “a state-endorsed genetic-engineering project” that will allow parents to predict the IQs of embryos and selectively breed ever-smarter children. (“That’s nuts,” says Hsu.) “Intelligence does push a lot of buttons. It’s like waving a red flag to a bull,” says Plomin. He argues that there is nothing wrong with using genetic information as the basis of educational interventions. “I’m interested in predicting learning problems early rather than waiting until kids get to school and then fail,” he says.

But Paul Martin, a sociologist at the University of Sheffield, UK, is surprised that geneticists are still pursuing this line of research. “I think most people would say that’s the wrong paradigm, when most educational research suggests that social factors are incredibly important,” he says. “Strategically, this seems like something of a throwback.”

More controversy is likely to flare when or if an intelligence factor emerges from the project. BGI is halfway through its sequencing, but it is unclear when findings will be released. “You might not see anything for a year,” says Hsu; it depends on how long the analysis takes. In the meantime, as the cost of sequencing continues to fall, larger sample sizes may soon become available for studies of this kind. “In 2009, we thought it’d be impossible to have a schizophrenia study with 20,000 cases,” says Peter Visscher, a geneticist from the University of Queensland in Brisbane, Australia. “Now, the international community is up to 40,000.”

Still, he adds that the idea of predicting intelligence from a DNA sample is fanciful. “Even for human height, where you have samples of hundreds of thousands, the prediction you’d get for a newborn person isn’t very accurate,” he says. “That will be true for IQ for a long time to come.”