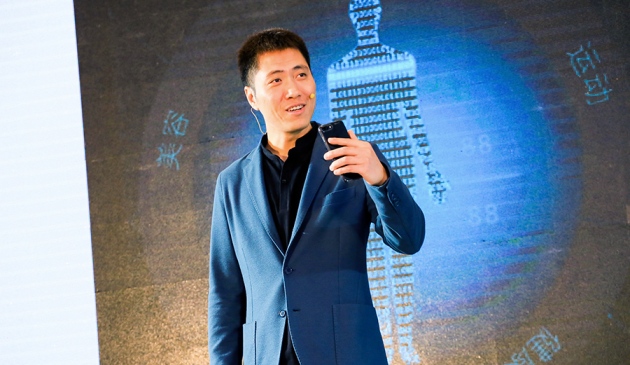 One of China’s most intriguing biotechnology companies has fleshed out an earlier quixotic promise to use artificial intelligence (AI) to revolutionize health care.

The Shenzhen firm iCarbonX has formed an ambitious alliance with seven technology companies from around the world that specialize in gathering different types of health-care data, said the company’s founder, Jun Wang, on 5 January at the Digital Life Summit, which was hosted by iCarbonX.

The alliance will use algorithms to analyse reams of genomic, physiological and behavioural data and provide customized health and medical advice directly to consumers through an app.

The announcement was a long-anticipated debut for iCarbonX, which Wang founded in October 2015 shortly after he left his leadership position at China’s genomics powerhouse, BGI, also in Shenzhen. The firm has now raised more than US$600 million in investment — this contrasts with the tens of millions that most of its rivals are thought to have invested (although several big players, such as Google, have not disclosed exact figures). Initial funding of some $200 million came mostly from Shenzhen-based Tencent, which owns the social-media application WeChat. At the summit, Wang said that roughly another $400 million had been invested in the alliance members, but he declined to name the source. Wang also demonstrated the smartphone app, called Meum after the Latin for ‘my’, that customers would use to enter data and receive advice.

As well as Google, IBM and various smaller companies, such as Arivale of Seattle, Washington, are working on similar technology. But Wang says that the iCarbonX alliance will be able to collect data more cheaply and quickly.

The tools offered by alliance partners are cutting edge and the set-up will allow different types of data to be integrated seamlessly; moreover, China’s large population is already used to sharing information through WeChat and other social media, Wang notes. “No one will be able to collect at the same scale that I am doing,” he says. Wang is confident that he can get samples and data from one million people in five years, which in turn will lead to a more informed AI. 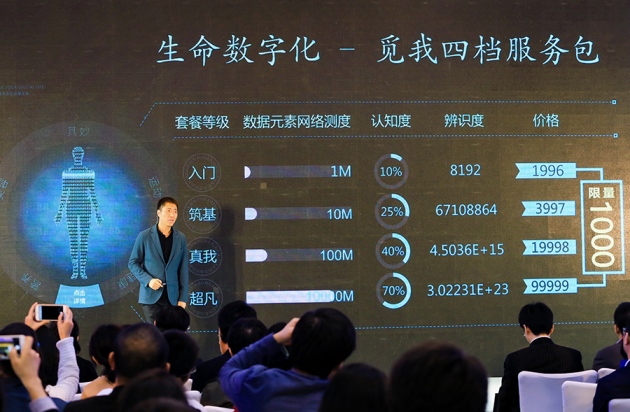 The Meum app can give tailored advice on what to eat and when to sleep.

His plans are driven by frustration with genomics. The largest genomic studies offer only subtle hints about an individual’s susceptibility to disease — such as pinpointing a gene that makes an individual only one or two per cent more likely to develop heart disease. So, in addition to mining its customer’s genomes, the iCarbonX alliance will scour biological molecules from various tissues to provide a more accurate and actionable picture of someone’s health. Wang chose alliance members for their promise in mining such signals.

SomaLogic of Boulder, Colorado, for example, has a chip that can measure some 4,200 proteins simultaneously. In June, researchers using a commercially available precursor that reads 1,130 proteins were able to predict which subset of heart-attack patients would have a recurrence by measuring the activity of nine blood proteins (P. Ganz et al. J. Am. Med. Assoc. 315, 2532–2541; 2016).

Another alliance member, HealthTell of San Ramon, California, makes a chip that uses microarrays of some 330,000 protein fragments to fish antibodies from a blood sample to answer questions about disease progress, allergies and vaccine effectiveness (J. B. Legutki et al. Nature Commun. 5, 4785; 2014). And another, PatientsLikeMe of Cambridge, Massachusetts, asks its 500,000 or so users to upload to a website less-clear-cut data about pain levels, sleep and fatigue. These are combined with medical data, behaviour patterns and the users’ experiences of diseases and drugs to find patterns that predict such ‘immeasurables’.

The end result will be an unwieldy set of data from various sources, which is why Wang and a team at iCarbonX are developing algorithms to understand how these variables correlate with healthy or diseased states. The Meum app enables users to enter their meals and activity levels, as well as any physiological or vital-sign data, and gives advice on what to eat, when to sleep and how active they should be.

Views are mixed about how well the venture will work. The alliance will provide iCarbonX with a collection of high-quality indicators that should reduce noise in the data and allow patterns to emerge, says Bernard Munos, a senior fellow at FasterCures, a drug-development advocacy organization in Washington DC. “This is very important given the number of variables they will be dealing with.”

But he worries about the chaotic behaviour of some of the systems. Alliance member General Automation Lab Technologies of San Francisco, California, will provide personalized assessments of how microbes living on someone’s body may affect their health. But the microbiome is poorly understood and in a constant state of flux, says Munos. “There is a lot of randomness in biology at the individual level that will be hard to capture, let alone model. I wish them well, but, at the moment, I am guarded as to their chance of success.”

Others have faith in Wang. “There’s no bullshit. He sucks you in with a vision of what can be, and then he makes it happen,” says Larry Gold, founder and chairman of alliance member SomaLogic.

Wang is keenly aware that the success of the venture will depend on its users’ readiness to submit data and heed the advice the app gives. He said during one of his many toasts during the summit: “Meum might tell me not to drink, but I don’t have to listen.”