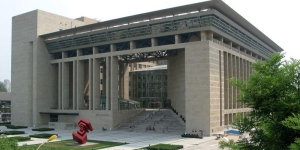 The National Science Library at the Chinese Academy of Sciences in Beijing helped build a system of open-access repositories of research papers.

China has officially joined the international push to make research papers free to read. On 15 May, the National Natural Science Foundation of China (NSFC), one of the country’s major basic-science funding agencies, and the Chinese Academy of Sciences (CAS), which funds and conducts research at more than 100 institutions, announced that researchers they support should deposit their papers into online repositories and make them publicly accessible within 12 months of publication.

The policies, which went into effect the same day they were announced, are similar to the mandate set by the US National Institutes of Health (NIH). Xiaolin Zhang, director of the National Science Library at the CAS in Beijing, says that another major research-funding agency, the national ministry of science and technology, is also researching open-access policies. He expects that its policy will take a similar line. (The ministry had not provided comment by the time this article was published.)

The announcements could see tens or even hundreds of thousands more papers made open access. Zhang says that, according to data from the Science Citation Index (SCI) database maintained by Thomson Reuters, Chinese research output has swelled from 48,000 articles in 2003, or 5.6% of the global total, to more than 186,000 articles in 2012, or 13.9%1. Of those, more than 100,000, or 55.2%, involved some funding from the NSFC, says its president, Wei Yang. (The agency has a US$3.1-billion budget this year.) And CAS scientists published more than 18,000 SCI articles in 2012, and more than 12,000 articles in domestic Chinese journals, says Zhang.

Both agencies plan to release more detailed guidelines on implementation. In particular, the NSFC will establish a repository into which researchers must upload papers, possibly modelled after the NIH’s PubMed Central.

CAS started developing a network of repositories for its institutes five years ago, says Zhang, and has a central website (IR GRID) for searching them. By the end of 2013, more than 400,000 articles had been deposited, accumulating 14 million downloads (half of those in 2013)1.

The announcements last week came ahead of a meeting, opening 26 May in Beijing, of the Global Research Council, a discussion forum for heads of funding agencies around the world. On the agenda is the review of an open-access action plan agreed at the 2013 meeting.

Johannes Fournier, who manages open-access policy at Germany's main research-funding agency, the DFG, in Bonn, says that most organizations responding to a questionnaire about implementing open access — the results of which will be presented at the upcoming meeting — prefer to tell authors to archive their papers in repositories, a route known as ‘green’ open access (or green OA). Within this framework, the idea that authors would then make papers accessible after 12 months has gained support from an “emerging international consensus of funders, and the majority of publishers”, says Zhang.

But in the United Kingdom, private and public funders have pushed hard for policies that require papers to be made free to view on publishers' websites as soon as they are published (known as gold OA). Gold OA is the only way to “exploit the full potential of the research we fund”, says Robert Kiley, head of digital services at the Wellcome Library in London. “I am not aware of any ‘international consensus’ on supporting delayed access,” he says.

Even in countries that mandate green OA “there is still a desire to move to full open access,” says a spokesperson for Research Councils UK, an umbrella body of public funding agencies.

And in practical terms, Kiley adds, even though the NIH, for example, mandates only delayed access, its researchers are still using their grant money to pay for their research to be published in open-access journals. The CAS National Science Library and other international organizations signed a statement last week arguing for immediate open access to research papers, saying that delayed access should be only a transitional mechanism.

Despite that encouragement, Zhang notes that there are challenges with the open-access market, such as the existence of ‘predatory’ open-access journals (which take payments to publish articles but have slack or non-existent peer review), high fees and lack of transparency. “The agencies are studying the selection guidelines to help researchers select open-access journals with reliable quality control and reasonable charges,” he says. “It is strongly felt that there needs to be a balanced mechanism to safeguard the interests of authors and funders in the gold OA market.”

Another unresolved issue is whether the 12-month grace period should also apply to articles in the social sciences and humanities — which are within the CAS’s purview but face “special challenges”, Zhang says.

This article was corrected to clarify that it was the National Science Library of the Chinese Academy of Sciences — and not the Academy itself — that signed a statement last week arguing for immediate open access to research.