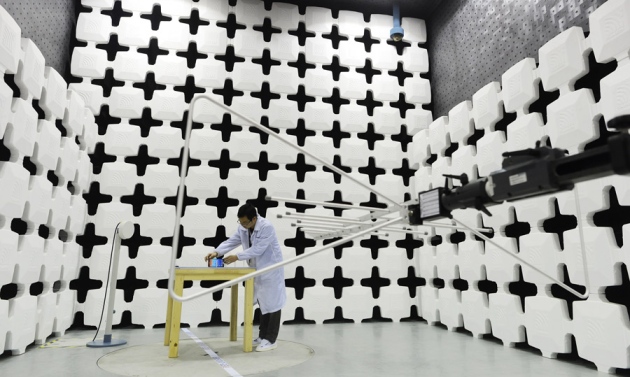 By pouring cash into science and technology faster than its economy has expanded, China has for the first time overtaken Europe on a key measure of innovation: the share of its economy devoted to research and development (R&D).

In 2012, China invested 1.98% of its gross domestic product (GDP) into R&D — just edging out the 28 member states of the European Union (EU), which together managed 1.96%, according to the latest estimates of research intensity, to be released this month by the Paris-based Organisation for Economic Co-operation and Development (OECD).

The figures show that China’s research intensity has tripled since 1998, whereas Europe’s has barely increased (see ‘Shooting star’). The numbers are dominated by business spending, reflecting China’s push in the manufacturing and information- and communication-technology industries.

James Wilsdon, a science-policy analyst at the University of Sussex in Brighton, UK, says that China’s R&D juggernaut is “astonishing”, considering that the entire system emerged only after the end of the Cultural Revolution in 1976. In absolute terms, China’s R&D spending is still almost one-third lower than that of Europe, but the new figures are “a significant milestone”, says Wilsdon.

The reorientation of China’s economy displays its soaring ambition. However, money does not buy innovation. Despite success in some areas, notably high-speed rail, solar energy, supercomputing and space exploration, leaders in China are concerned that innovation is lacking, say science-policy analysts. “Chinese leaders would like something equivalent to a Nobel prize, or a world-class product similar to an iPhone,” says Denis Simon, an expert on Chinese science and innovation at Arizona State University in Tempe. “But there is a lot of risk aversion within the Chinese R&D system that doesn’t allow for entrepreneurial behaviour.” 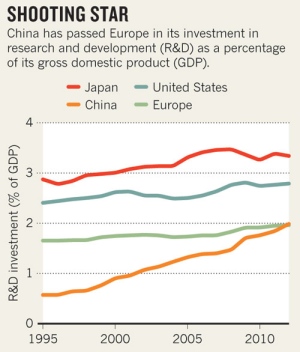 China’s leaders recognize the issues: the govern­ment is now reviewing a 2006 long-term plan on science and technology, and will be taking advice from international experts in Beijing this month. Lan Xue, director of the China Institute of Science and Technology Policy at Tsinghua University in Beijing, expects some changes at the level of academic science. “I’m relatively optimistic that there will be improvement in how R&D programmes are managed and peer-reviewed.”

In contrast to China’s rapid rise, Europe’s R&D spending has remained stagnant. The continent has made little headway in the past decade on a long-term target to reach 3% of GDP by 2020. “The European Commission has long warned that China is catching up in terms of R&D intensity,” says Michael Jennings, a spokesman for research at the commission. “The EU needs a real push now to increase R&D spending in the public sector, but especially in the private sector.”

One problem is that the commission cannot dictate business spending for individual member states. Another is the expansion of the EU, which has brought down average research intensity. OECD figures show the stark contrast between nations such as Germany, at 2.92% of GDP, and newer EU members such as Croatia, at 0.75%. Jennings adds, however, that an almost 30% boost to Horizon 2020, the EU research programme, is a good sign.

Some analysts argue that Europe does not need to be too worried by the stasis in research intensity. The number is an increasingly poor indicator of innovative activity, argues Kieron Flanagan, a science-policy analyst at the University of Manchester, UK. For example, it fails to pick up on innovation in the service-oriented industries that dominate many Western economies. An architectural or advertising firm could innovate while meeting the demands of a contract — making advances that could be widely copied and meaningfully affect an economy. Yet they would not count as R&D spending.

In China, meanwhile, “a great stodgy mass” of state-owned enterprises dominates commercial R&D spending — and they might actually suppress innovation, says Wilsdon. According to a study co-authored by Wilsdon and published in October 2013 by the innovation charity Nesta, based in London, the state companies might block more-inventive small and medium-sized enterprises. China, the study argues, is an “absorptive state”: one that adopts and adapts incoming technologies from overseas but does little breakthrough research. However, Wilsdon points to a few eye-catching bright spots: privately held, globally minded companies that include the tele­communications firms Huawei Technologies and ZTE, the e-commerce giant Alibaba and the computer firm Lenovo.

China’s emphasis on applied and product-development research means that funding for basic science remains low: only 5% of the country’s total R&D is devoted to this, compared with 15–20% in other major OECD nations. That money has to support a larger number of researchers who are already poorly paid, says Xue. Many academics, he says, complement their salaries by taking on short-term projects for industry — work that can distract their focus from fundamental science problems.

“ Chinese leaders would like something equivalent to a Nobel prize, or a world-class product similar to an iPhone.”

Funding and evaluation systems suffer other distortions, says Cong Cao, a science-policy analyst at the University of Nottingham, UK. Grant money is not disbursed transparently, and basic-research funding tends to go to eminent scientists and safe projects, he says, with academics judged mechanically on the number of publications that they author. A staggering rise in scientific output has not yet been matched by an equivalent rise in highly cited articles; swathes of patents are filed but rarely used. Wilsdon says that world-class research occurs at the country’s top 30 universities and at Chinese Academy of Science institutes. “But it is still very patchy, and a lot of it is reliant on a relatively small number of outstanding scientists lured back from overseas,” he says.

Simon adds that China’s scientists need more independence and freedom to work on risky projects. Such changes might be on the way: Cao expects that at the forthcoming review of China’s 2006 science plan, funding agencies will be told to be more transparent about their grants and grantees, and Chinese researchers will be allowed to use more of their funding to boost the salaries of research staff.

One of the plan’s paramount goals seems to be right on target, however: China, unlike Europe, looks set to boost its research spending to 2.5% of GDP by 2020.