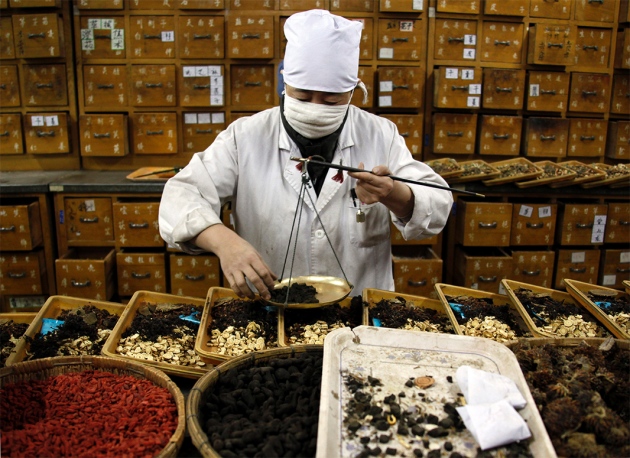 The Chinese government is promoting traditional Chinese medicines as an alternative to expensive Western drugs.

Support for traditional medicine in China goes right to the top. President Xi Jinping has called this type of medicine a “gem” of the country’s scientific heritage and promised to give alternative therapies and Western drugs equal government support. Now the country is taking dramatic steps to promote these cures even as researchers raise concerns about such treatments.

From early next year, traditional Chinese medicines may no longer be required to pass safety and efficacy trials in humans in China. Draft regulations announced in October by the China Food and Drug Administration (CFDA) mean traditional medicines can skip such costly and time-consuming trials as long as manufacturers prepare ingredients using essentially the same method as in classic Chinese formulations. The State Administration of Traditional Chinese Medicine and the CFDA will compose a list of the approved methods.

The Chinese government has been forcefully promoting traditional Chinese medicines (TCMs) as an alternative to expensive Western drugs. Doctors of Chinese medicine have welcomed the new policy, saying that it will make it easier for companies who produce such medicines to get drugs approved and make them available to patients. Lixing Lao, director of Hong Kong University’s School of Chinese Medicine, says that although traditional medicines will no longer need to go through clinical trials, the CFDA will still require remedies to undergo preclinical pharmacological testing and drug-toxicity studies in animals or cells to gain approval.

But scientists say that safety concerns continue to plague the industry, and that minimizing clinical-trial requirements could put more patients at risk. On 23 September, the CFDA recalled batches of two injectable TCMs after about ten people fell ill with fevers and chills.

Less than a month later, on 18 October, researchers in Singapore and Taiwan published a study in Science Translational Medicine linking liver cancer to aristolochic acid, an ingredient widely used in traditional remedies1. Lead author Steven Rozen, a cancer-genomics researcher at Duke-NUS Medical School in Singapore, is convinced that aristolochic acid contributed to the mutations, but says it’s harder to determine to what extent it caused the tumours.

Aristolochic acid has also been linked to cancers of the urinary tract and can cause fatal kidney damage2, 3. Rozen says it is still in common use, despite warnings from the US Food and Drug Administration that it is associated with kidney disease. “It would be a good time to reassess regulations” of aristolochic acid, he says.

Lao sees people take remedies containing aristolochic acid every day, and says it should not cause problems if taken “moderately and to treat diseases” rather than as a regular supplement. He says more research is needed into how to ensure the safe use of the potentially toxic substance. Overall, Lao is not concerned about safety issues with traditional medicines because, “unlike Western drug development, these herbal formulas have been used for hundreds and thousands of years,” he says.

But Li Qingchen, a paediatric surgeon at the Harbin Children’s Hospital and a well-known critic of TCMs, says the recent recalls of remedies show that current safety measures aren’t adequate. He says doctors need to inform the public about some of the dangers associated with traditional medicines, but that most are unwilling to speak out against them. “Few doctors would dare to publicly criticize TCMs,” he says. Li thinks that the government’s promotion of TCMs will make it harder for scientists to criticize the drugs “because the matter gets escalated to a political level and open discussions become restricted”.

With strong government support for the alternative medicines industry, Chinese censors have been quick to remove posts from the Internet that question its efficacy. On 23 October, an article on a medical news site that called for closer attention to the risks of aristolochic acid was removed from social media site WeChat. The story had been viewed more than 700,000 times in three days.

Debate over TCMs has been silenced before in China. Last year, a Beijing think tank — the Development Research Center of the State Council — proposed banning the practice of extracting Asiatic black bear bile, another common ingredient in TCMs. The think tank’s report questioned the remedy’s efficacy and suggested using synthetic alternatives. It was removed from the think tank's website after the Chinese Association of Traditional Chinese Medicine, which supports the development of TCM, called it biased and demanded an apology.

The government’s ultimate goal is to have all Chinese health-care institutions provide a basic level of TCMs by 2020. A roadmap released in February 2016 by the State Council, China’s highest administrative body, plans to increase the number of TCM-licensed doctors to 4 per 10,000 people, an increase from less than 3 practitioners per 10,000 people. The government also wants to push TCMs’ share of pharmaceutical sales from 26% to 30% by the end of the decade.