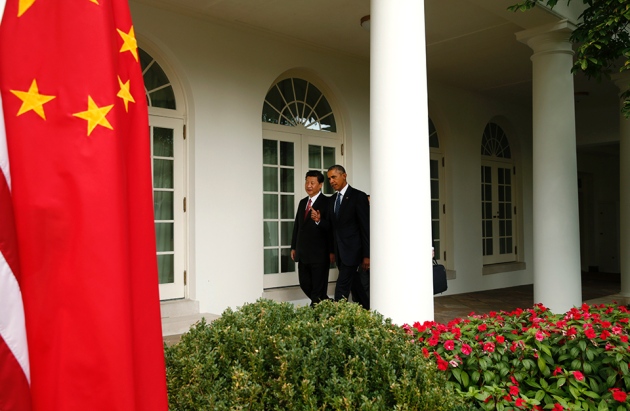 Chinese President Xi Jinping and US President Barack Obama have lots to talk about these days.

With US President Barack Obama at his side, Chinese President Xi Jinping announced plans on 25 September for a national trading system to limit greenhouse-gas emissions.

The programme will begin in 2017. Xi's announcement builds on a 2014 climate agreement between the United States and China — the world's two largest emitters — and could help to build momentum for a new global climate pact ahead of United Nations talks in Paris in December.

“Our cooperation is delivering results for both our nations and the world,” said Obama, speaking in the White House rose garden, where he and Xi also announced a plan for reporting greenhouse-gas data. Experts say that this could make it easier to track energy use and emissions in China.

The two leaders also pledged to implement similar fuel-efficiency standards for heavy-duty vehicles by 2019, and to work together to promote global development.

Xi said that China will contribute 20 billion yuan (US$3.1 billion) — an amount level with a similar US commitment — to an international fund intended to help developing countries to address global warming. The announcement comes as countries gather at the UN headquarters in New York to adopt new Sustainable Development Goals to guide poverty-reduction efforts until 2030.

This wave of US–China cooperation comes after similar commitments revealed by Xi and Obama at a meeting in Beijing in November 2014. Then, Xi said that China would increase its production of renewable energy and ensure that its greenhouse-gas emissions would peak around 2030.

Although questions remain about how high China’s emissions could rise between now and then, observers say that the country's adoption of a market-based cap-and-trade approach to control emissions shows that it is serious about tackling global warming and air pollution.

“This is truly significant, and it’s going to be extremely important in putting wind at the backs of delegates at the climate summit in Paris,” says Robert Stavins, an economist at Harvard University in Cambridge, Massachusetts.

Cap-and-trade systems set an overall limit on emissions and then distribute allowances to emitters. As total emissions decline, companies can buy permits to emit more — or make money by selling unused allowances. The goal of such a system is to spur innovation and to allow companies to find the cheapest way possible to reduce emissions.

The European Union has been operating the world’s largest cap-and-trade system since 2005, and California and a group of northeastern US states run similar systems. China’s trading scheme is expected to encompass roughly half of the country's emissions, including those from electricity generation and energy-intensive industries. That would make it the largest such system in the world.

China's plans come as countries that will participate in the upcoming UN climate talks grapple with whether to allow links among emissions-trading systems in different parts of the world.

A coalition of countries, including Venezuela, Nicaragua and Cuba, is pushing to prevent international trading, Stavins says, which would prevent money from flowing to those regions where it is easiest — and cheapest — to reduce emissions. “That, in my mind, would be a tragedy,” he adds.

Although many economists believe that cap-and-trade systems represent the cheapest way to reduce emissions, their track record in the real world is mixed. The EU carbon market, for instance, crashed early on owing to an oversupply of allowances, and even today prices remain around €8 (US$9) per tonne of carbon dioxide — too low to spur a major industrial revolution.

China has been experimenting with carbon trading at the provincial and city level, but implementing a national system could be particularly difficult. Researchers have had a hard time verifying even basic information about energy consumption and emissions, and this could increase the risk of early missteps, says Glen Peters, a climate-policy researcher at the Center for International Climate and Environ­mental Research in Oslo. He co-authored a paper published last month suggesting that Chinese emissions may be lower than previously believed1.

“There will be mistakes, no doubt, but lots of learning by starting early,” Peters says. “And when it is really needed to reduce emissions, a functioning framework will be in place.”