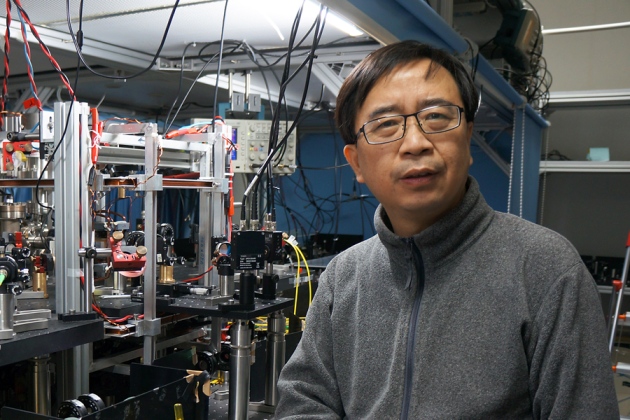 Pan Jian-Wei is leading a satellite project that will probe quantum entanglement.

Physicist Pan Jian-Wei is the architect of the world’s first attempt to set up a quantum communications link between Earth and space — an experiment that is set to begin with the launch of a satellite in June.

The satellite will test whether the quantum property of entanglement extends over record-breaking distances of more than 1,000 kilometres, by beaming individual entangled photons between space and various ground stations on Earth. It will also test whether it is possible, using entangled photons, to teleport information securely between Earth and space.

On 8 January, Pan, who works at the University of Science and Technology of China in Hefei, won a major national Chinese science prize (worth 200,000 yuan, or US$30,000) for his contributions to quantum science. He spoke to Nature about why his experiments are necessary and about the changing nature of Chinese space-science missions.

How are preparations for the launch going?

We always have two feelings. We feel, “Yes, everything is all right,” and then we are happy and excited. But we have, a couple of times, thought, “Probably our project will collapse and never work.” I think the satellite should be launched on time.

What technical challenges do you face?

The satellite will fly so fast (it takes just 90 minutes to orbit Earth) and there will be turbulence and other problems — so the single-photon beam can be seriously affected. Also we have to overcome background noise from sunlight, the Moon and light noise from cities, which are much stronger than our single photon.

What is the aim of the satellite?

The second step will be to perform long-distance entanglement distribution, over about 1,000 kilometres. We have technology on the satellite that can produce pairs of entangled photons. We beam one photon of an entangled pair to a station in Delingha, Tibet, and the other to a station in Lijiang or Nanshan. The distance between the two ground stations is about 1,200 kilometres. Previous tests were done on the order of 100 kilometres1.

Does anyone doubt that entanglement happens no matter how far apart two particles are?

Not too many people doubt quantum mechanics, but if you want to explore new physics, you must push the limit. Sure, in principle, quantum entanglement can exist for any distance. But we want to see if there is some physical limit. People ask whether there is some sort of boundary between the classical world and the quantum world: we hope to build some sort of macroscopic system in which we can show that the quantum phenomena can still exist.

In future, we also want to see if it is possible to distribute entanglement between Earth and the Moon. We hope to use the Chang’e programme (China’s Moon programme  )   to send a quantum satellite to one of the gravitationally-stable points [Lagrangian points] in the Earth-Moon system.

How does entanglement relate to quantum teleportation?

We will beam one photon from an entangled pair created at a ground station in Ali, Tibet, to the satellite. The quantum state of a third photon in Ali can then be teleported to the particle in space, using the entangled photon in Ali as a conduit.

The quantum satellite is a basic-science space mission, as is the Dark Matter Particle Explorer (DAMPE), which China launched in December.  Are basic-research satellites a new trend for China?

Yes, and my colleagues at the Chinese Academy of Sciences (CAS) and I helped to force things in this direction. In the past, China had only two organizations that could launch satellites: the army and the Ministry of Industry and Information Technology. So scientists had no way to launch a satellite for scientific research. One exception is the Double Star probe, launched in collaboration with the European Space Agency in 2003 to study magnetic storms on Earth.

We at CAS really worked hard to convince our government that it is important that we have a way to launch science satellites. In 2011, the central government established the Strategic Priority Program on Space Science, which DAMPE and our quantum satellite are part of. This is a very important step.

I think China has an obligation not just to do something for ourselves — many other countries have been to the Moon, have done manned spaceflight — but to explore something unknown.

Will scientists also be involved in China’s programme to build a space station, Tiangong?

The mechanism to make decisions for which projects can go to the space station has been significantly changed. Originally, the army wanted to take over the responsibility, but it was finally agreed that CAS is the right organization.

We will have a quantum experiment on the space station and it will make our studies easier because we can from time to time upgrade our experiment (unlike on the quantum satellite). We are quite happy with this mechanism. We need only talk to the leaders of CAS — and they are scientists, so you can communicate with them much more easily.

The discussion of previous experiments in entanglement distribution should have referred to a distance of around 100 kilometres not a few hundred. The text, and the reference cited, have been updated to reflect this.