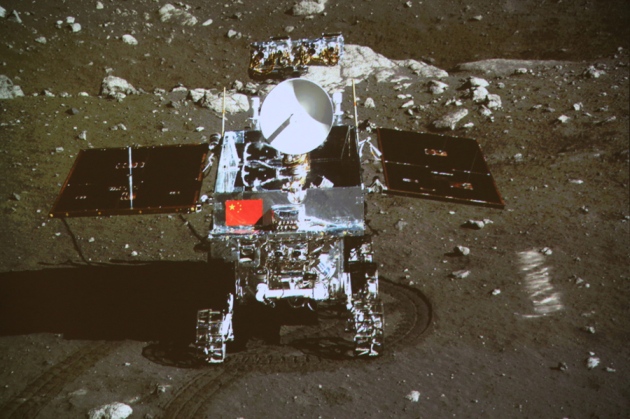 The Yutu rover photographed from the Chang'e-3 spacecraft that landed it on the Moon.

As it plunges into another two-week long ‘lunar night’, Jade Rabbit, China’s Moon rover, is living on borrowed time.

The rover, also known as Yutu, is the first manmade craft to soft-land on the Moon since the Soviet probe Luna 24 touched down there in 1976. Although mechanical failures crippled it during its first lunar night, the craft has lasted nearly twice as long as its initial life expectancy of three months. The fact that it is still working at all is a remarkable feat for the country’s space ambitions, lunar researchers say.

“Just landing and getting it to work even for one lunar day is a tremendous achievement,” says Ian Crawford, a planetary scientist at Birkbeck College, University of London. And, he adds, researchers are eager to get their hands on the results of the mission, during which the rover has been surveying the lunar surface and geological structure, scouting for natural resources and analysing the soil.

Yutu hitched a ride to the Moon on the Chang’e-3 probe in December 2013. It was designed to travel up to 10 kilometres over the lunar surface, but made it only about 100 metres before stalling, owing to mechanical problems when it shut down for its second lunar night, as temperatures plummeted to –180 °C.

The rover has not moved since then, says Yong-Chun Zheng, a lunar scientist at the National Astronomical Observatories in Beijing. The rover also has trouble with its solar panels, which no longer close to preserve heat during lunar nights.

But other systems and scientific instruments — a panoramic camera, infrared and X-ray spectrometers and a ground-penetrating radar — are operating normally, says Zheng: “The rover can still carry out measurements from the fixed location and send scientific data to the ground station.”

Chang’e-3 touched down on the northern edge of Mare Imbrium, where no other craft has landed. “Any result from an unexplored part of the Moon is of interest,” says Crawford. “It landed on some young, titanium-rich lava flows that no one has sampled before.”

Yutu's penetrator radar has detected several layers underneath its path, says Long Xiao, a planetary scientist at China University of Geosciences in Wuhan. Under the surface soil, known as regolith, it found a layer of debris from a crater-forming impact and two layers of lava flows, made of basalt.

Identifying sub-surface basalt layers can help to reconstruct the geological history of an area, says Crawford. Moreover, he says, Yutu could have also detected ancient soil layers, or palaeoregoliths, trapped between lava flows of different ages. These could contain records of solar wind and galactic cosmic rays from ancient times.

“Such palaeoregoliths could be 'time capsules' of solar and galactic history,” Crawford says. “The first step would be to actually find them, and if Yutu has demonstrated the ground-penetrating radar’s capability in this respect, it augurs well for future missions specifically designed to locate and sample sub-surface palaeoregolith deposits,” says Crawford.

The mission team plans to present the bulk of their results in an upcoming special issue of Research in Astronomy and Astrophysics, says Zheng.

It is not clear when Yutu will stop working, but the Chinese scientists are keen on using it for as long as possible. Then, the craft is likely to be left on the Moon for good, says Xiao.

China’s National Space Administration is now planning Chang’e-4 and Chang’e-5 missions. Their exact goals have not yet been decided, although Chang’e-5 will probably be a lunar sample-return mission, says Zheng.