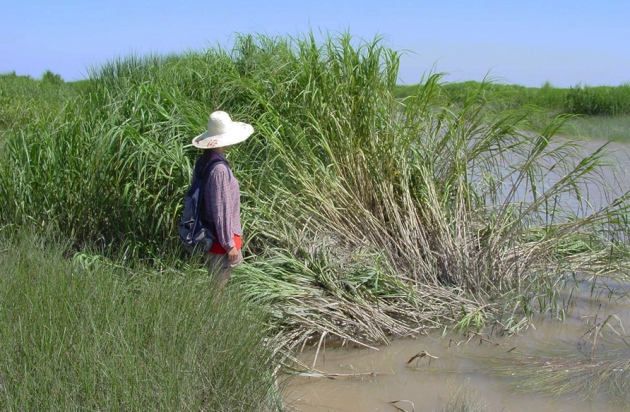 Cordgrass was originally introduced to China to help reclaim land from the sea, but has become invasive.

On an island in Shanghai at the mouth of the Yangtze River in China, a modern-day Great Wall is planned to thwart invaders. This time, however, the enemy is a marauding weed — and the US$163-million wall will not keep the invaders out, but enclose and drown them.

The plant in question is Spartina alterniflora, or cordgrass, a fiercely invasive salt-marsh grass that is native to eastern North America. In 1979, the plant was introduced to China because its roots can trap sediment, making it ideal for erosion control and land reclamation. Since then, the weed has spread rapidly across the country’s coastal regions, covering some 400,000 hectares (see ‘Coastal invasion’). Cordgrasshas infested many countries, but “the world’s largest invasion is in China”, says Donald Strong, an ecologist at the University of California, Davis. “It’s a piece of ecological engineering that has gone out of control.”

The threat of cordgrass is especially acute on Chongming Island, home on its eastern end to the 24,000-hectare Shanghai Chongming Dongtan National Nature Reserve — declared a region of international ecological importance by the Ramsar Convention, a global wetland-conservation treaty. Millions of migratory birds overwinter here, and it is a precious spawning and feeding ground for more than 60 fish species — including the critically endangered Chinese sturgeon (Acipenser sinensis). 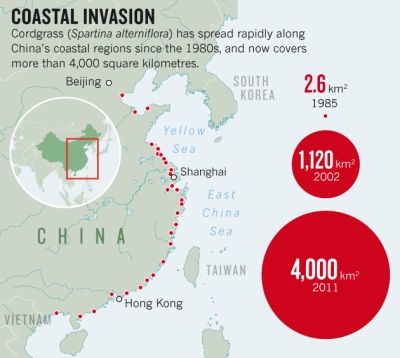 Cordgrass has been spreading there “like a cancer”, says reserve director Tang Chendong, so far consuming more than 10% of the wetland. It colonizes an area by forming dense bundles with deeply penetrating roots — squeezing out native plants and burrowing invertebrates, eating mudflats and drying up wetlands. At Dongtan, “this has had devastating consequences for many bird species”, says Ma Zhijun, an ornithologist at Fudan University in Shanghai. The reed parrotbill (Paradoxornis heudei) — which nests on native reeds and is one of Chongming’s best-known species — was once abundant in the reserve, for example. But its numbers have declined by 40% in the past decade, with more than half of its habitat now overtaken by cordgrass. The shrinking of mudflats also threatens the hundreds of thousands of migratory shorebirds that rely on the reserve as a stopover site.

The best way to get rid of cordgrass over a large area is to spray herbicides from a helicopter — as has been successfully done in the western United States, Australia and New Zealand. But the reserve’s management could not get permission to fly helicopters over Chongming, says Tang, and authorities in Shanghai feared that herbicides would damage native plants, wildlife and local fisheries. So Chinese researchers have come up with another approach. After years of studying cordgrass in field experiments, ecologist Li Bo at Fudan University and his colleagues found that if the plants are cut to the ground and submerged for six months, nearly all of them die.

That is where the wall comes in. In October, construction of an 8-metre-high, 27-kilometre-long sea wall is set to begin at the heart of the reserve. It will stop tides reaching a 2,400-hectare, cordgrass-ridden area that will be subdivided into self-contained grids by mud dykes, with each grid being treated separately. Since early July, researchers have been cutting down cordgrass to test how grid size, topography and tidal patterns might affect eradication efficiency.

Walls are not new to Chongming Island, which sits a few dozen kilometres from the teeming city of Shanghai. Every inch of land is precious, and sea walls have been used in past decades to reclaim land from the sea for agriculture and other human uses.

Conservation experts say that the cordgrass-eradication scheme — given US$163 million by the Shanghai Forestry Bureau and approved in 2008 — is intriguing, but some think that it is overkill. Financially, “it’s an incredible, major project” to get rid of some weeds, says David Melville, a conservationist in Nelson, New Zealand, who is advising the reserve about the project. The cordgrass “is certainly a problem”, he says. “It’s just a matter of whether one really needs to build such a massive, permanent sea wall to resolve it.”

Melville and other experts note that an 8-metre-high wall — accounting for more than 80% of the project’s budget — is unnecessary when cordgrass can be killed with just half a metre of water. Crucially, they worry that a permanent barricade will cripple efforts to restore tidal habitats for birds. For example, without the ebb and flow of tides, the sea bulrush (Scirpus mariqueter), a native intertidal grass bearing fruit and stalks that are key food sources for many birds, will not be able to grow back, says Wang Tianhou, a wetlands ecologist at East China Normal University in Shanghai.

“It’s unrealistic to conserve habitats without any compromise.”

More fundamentally, the current plan will not even eradicate all cordgrass from the reserve, says Li. Following approval in 2008, the project was put on hold until after the World Expo 2010 in Shanghai because officials did not want to compromise the city’s image with a building project inside a nature reserve. During that time, the cordgrass grew beyond the proposed sea-wall borders by a few hundred metres.

Cordgrass “will continue to eat up the tidal flats and spread to other parts of the reserve”, Li says. But a scheme with a different wall and a larger enclosure would cost more and require another round of approval that could take years, he says — so he feels it is best that the project goes ahead.

Some researchers argue that temporary mud dykes could be a solution: they would cost much less than a sea wall, be easier to secure approval for, and could eradicate the cordgrass in the entire reserve while retaining natural tidal rhythms. But “factors other than conservation were likely to be involved in the decision-making process” that led to the plan for a permanent sea wall, says Ma. As more farmland is converted to hotels, amusement parks and golf courses in Chongming, local officials are increasingly pressed to find lands to replace them — as required by the central government. Reclaiming land from the sea is seen as an easy and cheap option.

Researchers such as Li are pragmatic about the possibility that part of the reserve might one day be co-opted for farming. “It’s unrealistic to conserve habitats without any compromise,” he says. “The officials need to see that they will get something out of the project, too.” In the meantime, the scheme will at least ameliorate the cordgrass infestation — and will create more habitats for birds. “It’s a better option if the alternative is to do nothing,” Li says.