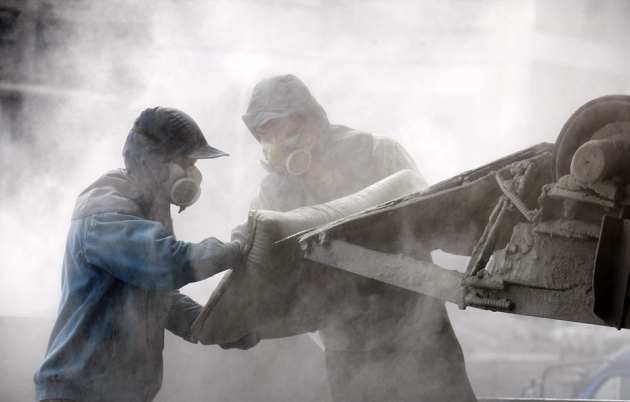 China’s cement industry may produce less carbon than was thought.

China’s carbon emissions may be significantly lower than previously thought — about 14% less in 2013 than estimated by the Chinese government and others, according to research published this week in Nature (Z. Liu et al. Nature 524, 335–338; 2015). The analysis draws on data from more than 4,200 Chinese mines — including new measurements of the energy content of coal — among other sources.

“At the beginning of the project we thought that the emissions might be higher” than existing estimates, says Zhu Liu, an ecologist at Harvard University in Cambridge, Massachusetts, and lead author of the study. “We were very surprised.”

His team’s findings do not unseat China from its position as the world’s largest emitter of carbon dioxide. Even when the lower estimate is taken into account, China’s carbon output for 2013 is still more than two-thirds higher than that of the United States, the second-largest emitter. But the study underscores long-standing uncertainties in the methods with which scientists calculate the emissions of individual nations, and how much carbon cycles through the atmosphere and into oceans and ecosystems. For comparison, the cumulative reduction in Chinese emissions outlined in the study — roughly 2.9 billion tonnes from 2000 to 2013 — is larger than the estimated amount of carbon that the world’s forests pulled out of the atmosphere from 1990 to 2007.

That presents a problem for researchers who study the carbon cycle. “We can easily go back and retroactively adjust Chinese carbon-emission estimates,” says Ashley Ballantyne, a climate scientist at the University of Montana in Missoula. “Unfortunately, we cannot go back and adjust all the previous studies on the global carbon cycle and their conclusions based on the previously biased emission estimates.”

The Chinese government releases data on energy consumption and production at the provincial and national levels, but those statistics often conflict with each other, and are revised frequently. Liu and his team analysed government data on energy production and on exports and imports of coal, oil and gas. They found that China’s fossil-fuel use was 10% above the official government estimate, but that the country’s overall emissions were lower once China’s reliance on low-quality coal from domestic mines was taken into account. This is because lower-quality coal contains less carbon than higher-quality deposits, so burning it produces less energy and less heat-trapping CO2.

The team says that its estimate for how much CO2 will be produced by burning Chinese coal is around 40% less per unit than the figures adopted by the Intergovernmental Panel on Climate Change. And the team calculates that emissions from cement production, a coal-fuelled process that is a major contributor to global emissions, are 45% below existing estimates.

The coal measurements were collected from mine reports and from a project sponsored by the Chinese Academy of Sciences that assesses the country’s cumulative carbon emissions and carbon uptake by ecosystems across China. Liu says that the quality of Chinese coal is likely to be getting worse as the country burns through its best reserves.

“This is probably the best available estimate of emissions from coal burning in China, and that is an important contribution,” says Gregg Marland, a geologist at Appalachian State University in Boone, North Carolina, and a co-author of the study. But he adds that the revised figure is within the range of uncertainty reported in existing inventories.

And it may need to be increased as the Chinese government releases further energy data, says Glen Peters, a climate-policy researcher at the Center for International Climate and Environ­mental Research in Oslo. Although China said in February that its coal consumption had dropped between 2013 and 2014, he notes, the government has since increased its cumulative estimate of coal consumption over the past decade by 12–14%. Scientists are still waiting for the government to release revised estimates of energy production, including imports and exports, over the past decade. Liu says that his team’s estimates are unlikely to change when the latest data are released later this year, but Peters says that the figures may need to rise by as much as 7%.

Such uncertainty arises in part from the many different ways to define and measure energy consumption; researchers do not know what kind of assumptions the Chinese government is making with its data. “If China reported their CO2 emissions, then we would know the assumptions that they want to make and many of these issues would then go away,” says Peters. The challenge, he adds, is unlikely to be resolved anytime soon.

“With Chinese energy statistics,” he says, “there is always a ‘but’.”