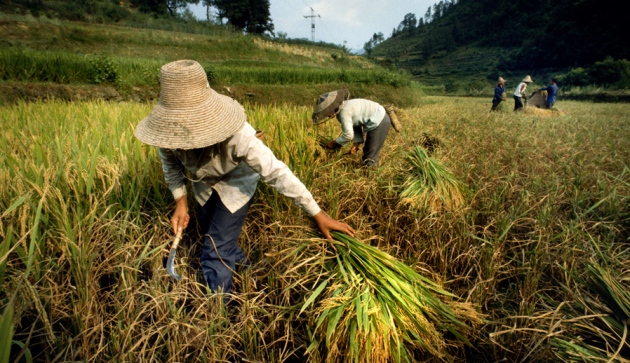 China is investing heavily in research and technology to modernize its agriculture.

The Chinese government’s promise last week that researchers will enjoy another year of increased funding was not unexpected, given the country’s relatively buoyant economy and high regard for science. But some scientists fear that too little money will be spent on good-quality basic research, and that too much will be wasted in a funding system in which good connections often trump academic expertise.

In a speech at the opening session of the annual National People’s Congress, China’s Premier, Wen Jiabao, lauded science and technology as key drivers of economic growth and individual prosperity, and backed up the rhetoric with hard cash. This year, central-government expenditure on science and technology is set to rise to 228.5 billion renminbi (US$36.1 billion), a 12.4% increase on last year’s spending, which slightly trails the country’s overall projected budget increase of 13.7%. Of that science budget, 32.5 billion renminbi will go towards basic research, a 10.1% increase on the 29.5 billion renminbi spent in 2011. Wen also stressed the government’s continuing commitment to improving agriculture, promising an additional 10.1 billion renminbi — a 53% rise on last year — for developing new agricultural technologies and modernizing China’s seed industry. Further details of funding allocations will emerge in the coming months, but sources close to government say that other areas likely to receive increased support include information technology, drug discovery, regenerative medicine, renewable energy and the exploitation of mineral and fuel resources.

In the past decade, China’s total expenditure on research and development (R&D) increased by about 20% per year. In 2009, it overtook Japan to become the world’s second-largest investor in R&D after the United States. “This increasing flow of investment has seen a jump in the total scientific output,” says Cong Cao, a science-policy researcher at the University of Nottingham, UK. Last year, a study by Britain’s Royal Society found that, in 2004–08, China produced 10% of the world’s published scientific articles, putting it second after the United States.

However, a study conducted by the World Bank and China’s cabinet concluded last month that Chinese research quality falls short. It noted that the country produces relatively few high-impact articles, and that the majority of Chinese patents constitute minor novelties rather than genuine innovations. These problems are “less about the amount of money spent in science than how the money is spent”, says Su Jun, a science-policy researcher at Tsinghua University in Beijing.

Experts say that one factor holding back China’s research quality is its modest spending on basic research. According to the annual report released last month by the National Bureau of Statistics of China, the country’s total public and private R&D expenditure last year was 861 billion renminbi (1.83% of gross domestic product), of which only 39.6 billion renminbi (4.6%) was spent on basic research. This falls far behind the 15–25% share in most developed countries.

“Weak capacity in basic science has become the main constraining factor for most R&D in China, including drug discovery,” says Liu Gang, a pharmacologist at Tsinghua University. In 2006, China unveiled an ambitious plan to invigorate its drug industry, with funding of about 20 billion renminbi over 15 years. “I’m not optimistic that we will be able to get any blockbuster drug out of that programme,” says Liu.

Some researchers also criticize the large share of funding typically given to government-led initiatives. “Genuine scientific breakthroughs cannot rely on such top-down mega-projects,” says Mu-Ming Poo, director of the Chinese Academy of Sciences’ Institute of Neuro­science in Shanghai. The United States, by contrast, funnels a large proportion of spending to investigator-initiated research. In China, such research is mostly sponsored by the National Natural Science Foundation, but its funding, which amounted to 12.4 billion renminbi last year, is only a small proportion of the government’s science expenditure.

Lack of fairness and transparency in funding decisions — with success often depending on personal connections — could also be holding back Chinese science. “A huge amount of money is often controlled by a small number of people, and there are significant irregularities in their funding decisions,” says one Beijing-based researcher. And in comparison with other research expenditure, investment in human capital is limited, with many young scientists deterred by poor salaries, adds Su. “Most labs in China struggle to find good postdocs, the key workforce of research,” agrees Poo.

The science ministry is under growing pressure from the scientific community to reform the research funding and appraisal system to help address these problems. Many researchers contacted by Nature hope that China will make the changes a top priority after its new government takes office later this year. “The extent to which the reform can be instigated and successful will determine the future of China’s technological and economic competitiveness,” says Cao.