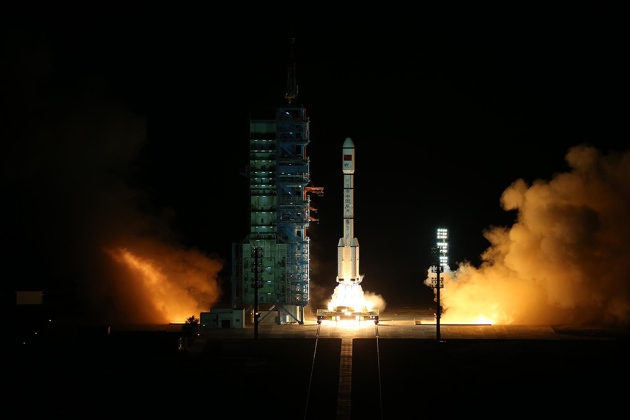 China has launched Tiangong 2, its second orbiting space lab — marking another stepping stone towards the country’s goal of building a space station by the early 2020s. The module, which launched aboard a Long March rocket from the Jiuquan Satellite Launch Center in the Gobi desert at 22:04 local time on 15 September, will initially fly uncrewed in low-Earth orbit, but a planned second launch will carry two astronauts to it in November.

Tiangong 2 (meaning ‘heavenly palace’) carries a number of scientific experiments, including an astrophysics detector that is the first space-science experiment built jointly by China with European countries.

“By itself, Tiangong 2 is not a monumental achievement, but it is an important step in a larger effort to eventually build a Chinese space station in the early 2020s,” says Brian Weeden, a space-policy expert at the Secure World Foundation in Washington DC.

The 8-tonne module replaces the now-defunct Tiangong 1, a mission that marked several milestones in China’s manned space programme, including the country’s first in-orbit rendezvous with another spacecraft. Mission control lost contact with that station earlier this year, and its orbit is slowly decaying. An uncontrolled re-entry is expected some time in 2017.

In November, a Shenzhou spacecraft will carry two astronauts to Tiangong-2 for a 30-day stay. Then in April 2017, a cargo craft will dock to refuel and bring more supplies. The module also carries a robotic arm, a prototype for a similar tool that would fly on a space station.

Tiangong 2 reportedly carries 14 experiments. These include POLAR, an international mission dedicated to establishing whether the photons from γ-ray bursts (GRBs) — thought to be a particularly energetic type of stellar explosion — are polarized. Answering this long-debated issue could shed light on how GRBs produce such high-energy photons in the first place.

“We aim to measure ten γ-ray bursts per year,” says POLAR project manager Nicolas Produit, an astrophysicist at the University of Geneva in Switzerland, who spoke to Nature from a hotel near the Jiuquan launch centre.

The €3-million (US$3.4 million) detector was built largely with Swiss funding, and with the collaboration of Swiss, Chinese and Polish scientists, and support from the European Space Agency (ESA). POLAR is the first space experiment developed as a full international collaboration between China and other countries, Produit says.

US law bars NASA from doing joint projects with China’s space agencies, but the Chinese Academy of Sciences is discussing a number of other space collaborations with ESA. The country has also been aggressively ramping up its space science: just in the last year, it put into orbit DAMPE, its first space probe dedicated to the search for dark matter, as well as QUESS, the world’s first quantum-communications satellite.

This is making the country an exciting place for international researchers to test ideas for space science, compared to projects run by ESA and NASA, which Produit says are slower-moving. “In China, things go fast. They have the money; they have the will,“ Produit says. “China is where things happen now.”

Still, the main goal for Tiangong 2 and a future space station is not science, Weeden points out. “China wants to build and operate a space station for the same reasons the United States and Soviet Union did in decades past: prestige.”