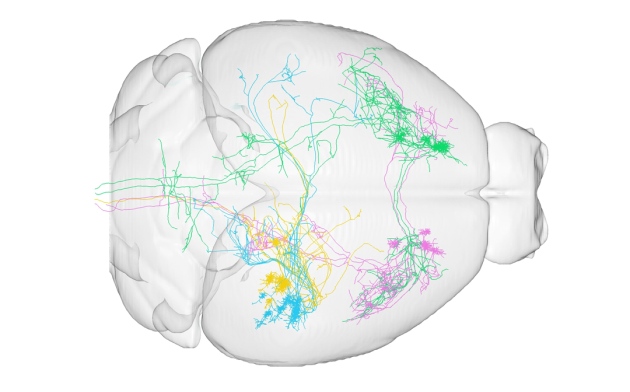 This reconstructed image shows how long-range neurons extend across a mouse brain.

Neuroscientists who painstakingly map the twists and turns of neural circuitry through the brain are about to see their field expand to an industrial scale. A huge facility set to open in Suzhou, China, next month should transform high-resolution brain mapping, its developers say.

Where typical laboratories might use one or two brain-imaging systems, the new facility boasts 50 automated machines that can rapidly slice up a mouse brain, snap high-definition pictures of each slice and reconstruct those into a 3D picture. This factory-like scale will “dramatically accelerate progress”, says Hongkui Zeng, a molecular biologist at the Allen Institute for Brain Science in Seattle, Washington, which is partnering with the centre. “Large-scale, standardized data generation in an industrial manner will change the way neuroscience is done,” she says.

The institute, which will also image human brains, aims to be an international hub that will help researchers to map neural connectivity for everything from studies of Alzheimer’s disease to brain-inspired artificial-intelligence projects, says Qingming Luo, a researcher in biomedical imaging at the Huazhong University of Science and Technology (HUST) in Wuhan, China. Luo leads the new facility, called the HUST-Suzhou Institute for Brainsmatics, which has a 5-year budget of 450 million yuan (US$67 million) and will employ some 120 scientists and technicians. Luo, who calls himself a “brainsmatician”, also built the institute’s high-speed brain-imaging systems.

“There will be large demand, for sure,” says Josh Huang, a neuroscientist at Cold Spring Harbor Laboratory in New York, which is also partnering with the Chinese institute. Access to high-throughput, rapid brain mapping could transform neuro-scientists’ understanding of how neurons are connected in the brain, he says — just as high-throughput sequencing helped geneticists to untangle the human genome in the 2000s. “This will have a major impact on building cell-resolution brain atlases in multiple species,” he says.

Mammalian brains have millions of cells, and human brains even have billions. And the cells come in some 10,000 different types, marked by differences in shape, size and the genes they express. Neuroscientists hope that mapping out the structures and how they interact will help to reveal their functions (see Nature 548, 150–152; 2017). By comparing particular neuron types across multiple brains, scientists might be able to pick out the effects of a disease or a learned behaviour on cell structure, says Jürgen Goldschmidt, a brain-imaging researcher at the Leibniz Institute for Neuro-biology in Magdeburg, Germany.

But such maps often require months or years of effort. The process involves shaving centimetre-long mouse brains into 15,000 ultrathin slices with a diamond blade, staining each layer with chemicals or fluorescent tags to pick out particular features, imaging each layer with a microscope and then reconstructing the images into a 3D map.

That’s where Luo’s institute can help. Its vast number of machines have impressive speed and resolution, collaborators say. According to Zeng, the devices can gather the same amount of detail on a mouse brain in two weeks as would require months using other technologies, such as super-resolution confocal imaging.

Participants at a February meeting of the US BRAIN initiative (Brain Research through Advancing Innovative Neurotechnologies) in Bethesda, Maryland, were treated to a display of the technology’s capabilities when they were shown an image of a neuron that wrapped all of the way around a mouse brain (see Nature 543, 14–15; 2017). Allen Institute neuroscientist Christof Koch, whose team did the work in collaboration with Luo’s group, suggests the extensive reach of the neuron shows that the cell has a role in coordinating inputs and outputs across the brain to create consciousness.

The Suzhou institute will generate a huge amount of data: each mouse brain map alone will be 8 terabytes, Luo says. But the volume of a human brain is nearly 1,500 times that of a mouse brain; it would take a single machine around 20 years to digitally reconstruct one at the institute’s current rate. Luo aims to increase the speed of his machines and to use multiple devices in parallel.

Luo is keen for worldwide collaboration; along with the Allen Institute and Cold Spring Harbor Laboratory, Stanford University in California is forming a partnership with the centre. But Luo says that interest is so high that he won’t be able to accommodate everyone. “We are already turning people down.”