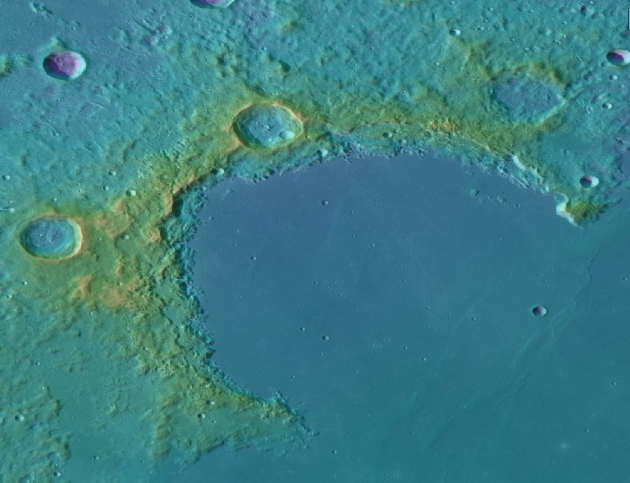 The Sinus Iridum area of the Moon was the Chang'e 3 spacecraft's planned landing spot.

At 1311 GMT on Saturday, the Chang’e 3 spacecraft hovered just metres above the Moon. Seconds later, it shut off its engines and dropped to the surface. With that plunge, China became only the third country to land a craft on the Moon, and the first to do so since the Soviet Union in 1976.

It was the end of a tense 11 minutes. Engineers at the Beijing Aerospace Control Center started landing operations when Chang’e 3 was some 15 kilometres above its target, and the touchdown depended on an entirely domestically designed and manufactured engine. But they needn’t have worried. The engine — the most powerful China has ever used on a spacecraft — automatically adjusted its power to balance the Moon's gravitational pull and smooth the lander’s approach.

Jun Yan, chief scientist of China's lunar exploration programme, says that they worried most that the engine might fail or that the automated monitoring system — the craft’s 'eyes' — might miss some rocks or pits on the surface, which could damage the craft. But everything went smoothly, says Yan. After Chang’e 3 dropped safely to the surface, the nervous excitement gave way to celebration, and the project engineers erupted in applause, accompanied by cheering, hugging and handshakes.

There seems, however, to have been a slight deviation from plans. China had originally publicized a landing location in Sinus Iridum (Bay of Rainbows) — a level plain thoroughly surveyed by a previous Chinese mission. Some media even stated that Chang’e 3 landed there. But it has since been confirmed that the spacecraft landed slightly to the east of the area, in the northern part of Mare Imbrium (Sea of Rains).

That might have been planned after all: Yan says that the mission’s greatest technical achievement so far is “landing in a very precise pre-selected spot”. Whatever the reason for the discrepancy, scientists around the world are excited by the possibilities that the location opens up. Carle Pieters, a planetary scientist at Brown University in Providence, Rhode Island, responded to the news of the location in an e-mail to a lunar-research community group. “Terrific! That landing site is in some of the unsampled young hi-Ti [high-titanium] basalts!” she wrote, referring to the relatively late-forming magmatic rock that scientists hope will hold clues to the Moon’s evolution.

The landing success was followed about seven hours later with more celebration when the Moon rover Yutu, also known as Jade Rabbit, drove off Chang'e 3's ramp and separated from the lander. The six-wheeled, 140-kilogram Yutu is scheduled to carry out a three-month tour of the Moon’s surface. Its most important task, says Yan, will be to use its powerful radar — capable of probing 100 metres below the surface — to survey the composition of the shallow subsurface and lunar crust. The next milestone will be analysing the composition and distribution of minerals on the surface with its infrared spectrometer and α-particle X-ray spectrometer, adds Yan.

The lander itself, which is equipped with various telescopes and cameras, will act as an astronomical observatory from its base on the Moon, exploring the Universe for at least a year.