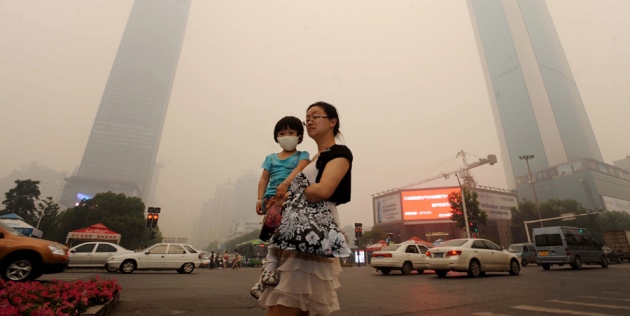 China’s decision to reduce its carbon dioxide emissions should help to alleviate the dangerously high levels of air pollution in the country.

China, responsible for about one-quarter of the world’s carbon dioxide emissions, has ambitious goals to reduce them — but has been unwilling to set absolute targets for fear of slowing economic growth. There are now signs that its position is changing.

On 18 June, the country will launch an emissions-trading scheme in the southern city of Shenzhen, marking its first attempt to cut emissions using market mechanisms. Under the scheme, more than 630 industrial and construction companies will be given quotas for how much carbon dioxide they can emit. Companies that pollute more than they are allowed will have to buy credits from cleaner counterparts that reduce emissions below their quota — thereby creating a price for the greenhouse gas.

Another six such cap-and-trade schemes will be rolled out by the end of the year in the cities of Beijing, Tianjin, Shanghai and Chongqing, and the provinces of Guangdong and Hubei. The trial will cover 864 million tonnes of carbon dioxide by 2015 — around 7% of China’s total emissions and about the total amount emitted by Germany each year, according to a report by the London-based analyst firm Bloomberg New Energy Finance. These regional pilot schemes will set the stage for the nationwide carbon market that is scheduled to launch in 2016.

China has committed to cutting its carbon intensity — carbon emissions per unit of gross domestic product — by 40–45% of 2005 levels by 2020, which allows for increases in emissions, although at a slower rate. The initial emissions limits for the regional schemes will be set by applying the carbon-intensity targets to the emissions of individual companies. In 2016, this system will be scaled up nationally, again in line with carbon- intensity targets.

After 2020, this plan is likely to be replaced with an absolute cap that would require a decline in overall emissions covered under the scheme. Such a move will depend on the effectiveness of an array of planned energy policies, researchers say. “It’s not difficult from a technical point of view,” says Xiang Gao, a member of China’s climate-talks delegation and a researcher at China’s National Development and Reform Committee (NDRC), the power­ful ministry responsible for planning the country’s economic and social development. “It’s a matter of political will — which, in turn, will depend on whether the top leadership can be convinced that such a move is best for the country’s economy and social stability,” Gao says.

Researchers say that China has reasons beyond climate change to implement emission caps. In the past few years, rampant air pollution has caused increased public resentment and social unrest across the country. “China may not have a choice any more,” says Knut Alfsen, head of research at the Centre for International Climate and Environmental Research in Oslo. “It’s just much better to control total emissions.”

“The energy market in China is not entirely free and has a lot of government interference and monopoly.”

A commitment from China to cap emissions “would breathe new life into climate talks”, adds Alfsen, who is also a member of the China Council for International Cooperation on Environment and Development, an international think tank that works closely with China’s cabinet and the NDRC. At the next climate-change summit, in Paris in 2015, nearly 200 countries will aim to reach a legally binding global agreement on emissions cuts, which would take effect in 2020. Kelly Sims Gallagher, an expert on energy and environmental policy at Tufts University in Medford, Massachusetts, says that an ambitious emissions cap from China “would send a strong political signal to the world” and would make it easier to pass more aggressive climate legislation in the United States, where there is strong political resistance to national climate regulations.

Most researchers contacted by Nature are only cautiously optimistic that China can cap its emissions. A carbon ceiling for China “depends in part on how successful the pilot schemes will be”, says Lei Ming, an environmental economist at Peking University in Beijing. “We will have to cross the river by feeling the stones,” he says, citing the famous one-liner by the late reformist leader Deng Xiaoping.

One of the main challenges for the nationwide cap-and-trade scheme will be establishing its credibility. Verifying emissions, for instance, will be difficult in such a large country, says Gallagher. David Yuetan Tang, board secretary of the Tianjin Climate Exchange, which is in charge of one of the seven pilot emission-trading schemes, says that there is an institutional void about who will do this — and also a legal void about how companies will be punished for fraudulent claims or emissions excesses. “This is absolutely paramount, because emission quotas are money,” he adds.

Moreover, whether emissions trading can work under China’s political system remains to be seen, critics say. “The energy market in China is not entirely free and has a lot of government interference and monopoly,” says Qi Ye, an environmental-policy researcher at Tsinghua University and director of the Beijing office of the international think tank Climate Policy Initiative. The price of electricity, for instance, is heavily controlled, he says, which could seriously diminish the impact of imposing a carbon price on electricity producers.

Emissions trading is just one of a series of energy and pollution policies due to be introduced in the next few years. For instance, Beijing is considering implementing a carbon tax to rein in pollution by sectors not covered by cap and trade, and continues to invest aggressively in renewable energy. It has also pledged to reduce the production and use of hydrofluoro­carbons, powerful greenhouse gases used in refrigeration and air conditioning.