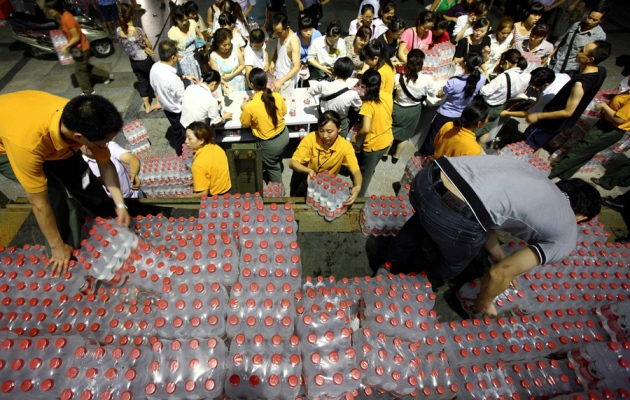 After drinking water was tainted in 2011, people in Mianyang, China, had to take emergency measures.

When rumours swirled earlier this year that factories in Weifang, China, were discharging waste water into the region’s aquifers — the principal source of drinking water for the city’s 9 million residents — citizens flocked to the Web to register their outrage on micro­blogging site Sina Weibo. The rumours were finally confirmed by officials in late May, further stoking public fears over an already hot issue: the sorry state of the water that so many Chinese people drink.

Now, a massive government investigation has documented the scope of the problem in northern China, and officials have formulated an ambitious plan to tackle it.

About 18% of the water that China uses comes from groundwater, and more than 400 of the country’s roughly 655 cities have no other source of drinking water. Much of the groundwater is contaminated, tainted by fertilizers, pesticide residues and dirty waste water used for irrigation in China’s vast rural regions, as well as pollutants from mining, the petrochemical industry, and domestic and industrial waste. Heavy metals are especially problematic, because “once in the groundwater, they don’t go away”, says Sun Ge, a research hydrologist at the US Department of Agriculture’s Forest Service Southern Research Station in Raleigh, North Carolina. “It will be very expensive to clean up, if it is even possible.”

In 2006, to assess the scope of the problem, the Chinese Ministry of Land and Resources launched a 6-year investigation focused on the North China Plain, the region most dependent on groundwater, which is home to nearly 130 million people. In late April this year, the government announced a work plan for control of groundwater contamination in the area. “The work plan is actually quite remarkable, and it is certainly a step in the right direction,” says Zheng Yan, who studies groundwater pollution and public health at Columbia University in New York.

The extent of the problem is unclear because the full results of the 2006 survey have not been made public. An official at the China Geological Survey, which commissioned the report, declined to offer details for fear of alarming the public. However, the government’s action plan acknowledges that the levels of pollution are serious. A 2012 report by the land ministry found that of 4,929 groundwater monitoring sites in 198 prefecture-level administrative regions across the country, 41% had poor water quality. Almost 17% had extremely poor water quality, with levels of iron, manganese, fluoride, nitrites, nitrates, ammonium and heavy metals exceeding safe limits.

“Water pollution is a more serious problem than the scarcity of water resources.”

Also last year, an article by Zhang Zhaoji, a hydrogeologist at the Chinese Academy of Geological Sciences’ Institute of Hydrology and Environmental Geology in Hebei and project leader for the 2006 survey, reported that in the North China Plain, some 35% of shallow groundwater sampling points had been contaminated by human activities (Z. Zhang et al. J. Jilin Univ. Earth Sci. Edn 42, 1456–1461; 2012). “Water pollution is a more serious problem than the scarcity of water resources,” says Song Xianfang, a hydrologist at the Institute of Geographic Sciences and Natural Resources Research (IGSNRR) in Beijing, part of the Chinese Academy of Sciences.

The contamination rates are “not a surprise, as China is under rapid urbanization and industrialization that bring problems of water pollution for both surface and groundwater”, says Sun. And, although it is hard to prove cause and effect, there will probably be fallout for public health, experts say. Government reports stated that in 2004, China had 38.8 million recorded cases of tooth-enamel damage owing to fluoride exposure; 2.84 million cases of bone disease owing to fluoride exposure; and 9,686 cases of arsenic poisoning.

“These diseases are closely related to environ­mental and geological factors [and are] especially associated with contaminated groundwater,” says Yang Linsheng, the director of the department of environmental geography and health at the IGSNRR. The Chinese Center for Disease Control and Prevention did not respond to Nature’s request for an interview.

In its plan, the government says that it will divide the North China Plain into 30 units for pollution prevention and control, which it will separate into three severity categories — serious, poor and good — to be addressed differently. The details, which have not been publicly released, include an investment of nearly 500 million renminbi (US$81 million) between 2013 and 2020 for a raft of measures across the country: to increase pollution assessments and establish a database of results; to control river pollution from agriculture and point sources from industry and landfill; to treat of polluted areas; and to conduct more research into clean-up and prevention strategies. Among other things, researchers will look into the effects of shale-gas development on groundwater.

The plan will also beef up environmental regulation. Experts say that will be a key measure, because the country must become more selective in approving industry projects. It must also enhance regulation of polluters, especially small rural companies such as paper mills. Furthermore, farmers must be educated in the proper use of fertilizers. Openness will be crucial in gaining public trust, experts add. “I would advocate data-sharing and transparency in reporting data,” says Zheng Chunmiao, director of the Center for Water Research at Peking University in Beijing. “Without this, people will be anxious.”