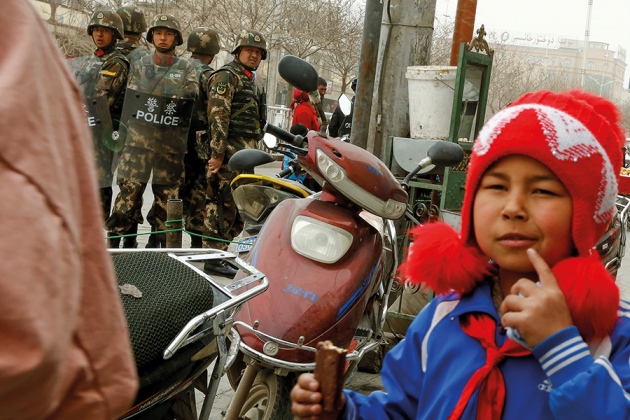 China has boosted its security presence in the Xinjiang region, home to a large Uighur population.

Police in the northwestern region of Xinjiang, China, have been collecting DNA samples from citizens and are now ramping up their capacity to analyse that genetic cache, according to evidence compiled by activists and details gathered by Nature.

The advocacy group Human Rights Watch reported last month that Xinjiang authorities intend to accelerate efforts to gather blood samples from the region’s large population of Muslim Uighur people. China’s government has cracked down on Xinjiang’s separatist movement in recent years, so the prospect of a DNA database there has stoked fears that authorities could use it as a political weapon.

“Our concern is that there is widespread collection of DNA without legal protection and without telling people,” says Maya Wang, a researcher for Human Rights Watch in Hong Kong and the author of the report.

In its report, the organization said that Xinjiang’s police had ordered 12 DNA sequencers. Nature has confirmed the order and learned, from documents and interviews with those involved in the transaction, that the police have purchased enough machines to process up to 2,000 DNA samples per day. The police department hung up when Nature rang to ask about the reason for the purchase.

That capacity goes well beyond what would be needed for routine forensics, says Sumio Sugano, a genomics researcher at the University of Tokyo. “It’s definitely the kind of capacity that can be used to build a database,” says a source familiar with the equipping of forensics laboratories in China, who did not want to be identified. “They are building a laboratory,” he suggested after being shown the full purchase order for the sequencing equipment.

According to a sales officer at a firm involved in the procurement, Xinjiang police have purchased eight sequencers produced by Thermo Fisher Scientific in Waltham, Massachusetts. The machines can be used to look at short stretches of DNA that tend to vary between individuals and are typically used in forensic DNA fingerprinting to match samples collected from a crime scene with individuals listed in a database (or even their close relatives). The police also purchased four domestically produced sequencers made for the same purpose.

Nature has learned that Xinjiang officials have also bought a ‘next generation’ DNA sequencer, which could be used to determine ancestry, eye colour and other physical characteristics from genetic samples.

The report also gives details of a nationwide database that began in the early 2000s and has accrued 44 million entries from 40 million individuals, including 1.5 million from samples, such as cigarette butts, found at crime scenes. China’s police have said that the database is for solving crimes. But Human Rights Watch says it has found evidence of “campaigns to amass biometrics from ordinary citizens”.

Many countries use DNA fingerprinting to solve crimes, reunite kidnapped children with their parents and identify bodies, and some researchers say that the boost in Xinjiang’s DNA-analysis capacity does not, by itself, stand out. “Expansion of police surveillance is expected by any civilized nation,” says Sara Katsanis, who researches the applications of genetic testing at Duke University in Durham, North Carolina.

Still, Katsanis and others worry about how DNA is being collected in China and especially in Xinjiang. Last year, Human Rights Watch reported that citizens in Xinjiang were required to give a blood sample to get a passport. And in March, Chinese state media detailed the conclusion of a 4-month programme during which 17.5 million people — who were predominantly Uighurs — were given health checks, including blood tests. Last week, reports emerged that many of the people who underwent these examinations had been forced to do so.

Megan Allyse, a biomedical-ethics researcher at Mayo Clinic in Rochester, Minnesota, says that DNA profiling is especially fraught in China, because there seems to be no clear framework governing how the samples can be collected, transferred or stored, or when they are allowed to be used in court, and other matters. She hopes that countries can work together to use the data justly. “We need broad, international consensus on the appropriate use of DNA in national-security collections,” she says.