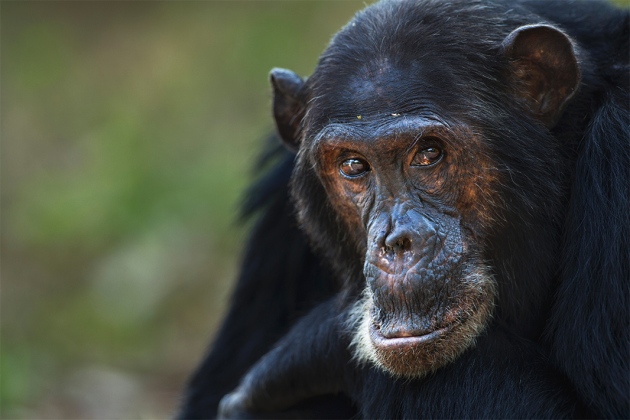 Aged chimpanzees develop brain characteristics that are similar — but not identical — to those seen in early Alzheimer's disease in humans, researchers report on 1 August in Neurobiology of Aging1. The findings from humanity's closest relatives could help researchers to understand why people develop dementia, as well as suggest that caretakers of aging, captive chimpanzees watch them closely for behavioural changes.

Although most animals’ cognitive abilities decline late in life, only people seem to develop Alzheimer’s disease, which can result in severe dementia symptoms. The brains of people with Alzheimer’s show several signs of the disease: plaques made of a protein called amyloid-β, tangles of a protein called tau and the loss of neurons. Humans were thought to be the only primates with brains that can contain plaques and tangles simultaneously — although one study did find both markers in a single chimp brain2.

Using a collection of chimpanzee brains that has been compiled over several decades, a team led by Mary Ann Raghanti, a biological anthropologist at Kent State University in Ohio, analysed the brains of 20 aged chimps that had died between 37 and 62 years of age. The team examined the brain regions that are damaged in people with Alzheimer's — such as the memory-forming hippocampus — and found that four of the preserved chimp brains contained both plaques and tangles. All 20 of the specimens contained ‘pre-tangles’, and blood vessels in several of the chimp brains contained amyloid-β. Because the protein is normally found outside of blood vessels in the human brain, this suggests that plaques may form in a different way in chimps.

“This is a really cool paper”, says Elizabeth Head, a neuroscientist at the University of Kentucky in Lexington. Even if chimps never develop the symptoms of Alzheimer's, knowing that they spontaneously develop biological signs of the disease could yield useful information about its early stages and potentially how to prevent it, she says.

Lary Walker, an experimental neuropathologist at Emory University in Atlanta, Georgia, is also impressed with the study. The strength of the paper, he says, is that the large number of animals involved provide a good sample of the different ways in which chimp brains age.

The researchers were not able to link the biological changes in the chimps’ brains to shifts in their behaviour later in life. The animals had lived in zoos, research labs and sanctuaries, and had, therefore, been exposed to different stimuli and undergone different cognitive tests.

Although severe dementia has never been observed in chimps, the presence of both plaques and tangles suggests that it could, says study co-author William Hopkins, a psychologist at Georgia State University in Atlanta. Given these findings, he says, those who look after chimps should actively monitor the cognitive health of ageing animals. In 2015, the United States effectively ended biomedical research on chimps, including magnetic resonance imaging scans, but Hopkins says that such scans could be useful for the aging population of animals retired from research facilities.

Another difference could be the behaviour of a protein called APOE, which controls how amyloid-β aggregates into plaques. Humans have evolved several versions of the APOE gene, one of which — APOE4 — makes a person more likely to develop Alzheimer’s. It is possible that evolution selected for the ‘bad’ version of APOE in people because it protects them from something else, such as a parasite3, says Caleb Finch, who studies ageing at the University of Southern California in Los Angeles.

Raghanti says that the researchers are now counting the neurons in the chimp brains they studied to determine whether the cells are lost with age, and studying inflammation in the brains. Both neuron loss and inflammation seem to contribute to Alzheimer’s in humans. “If we could identify the things that are similar and different in chimpanzees and humans, we can start to unlock why humans are so uniquely susceptible to this pathology,” she says.