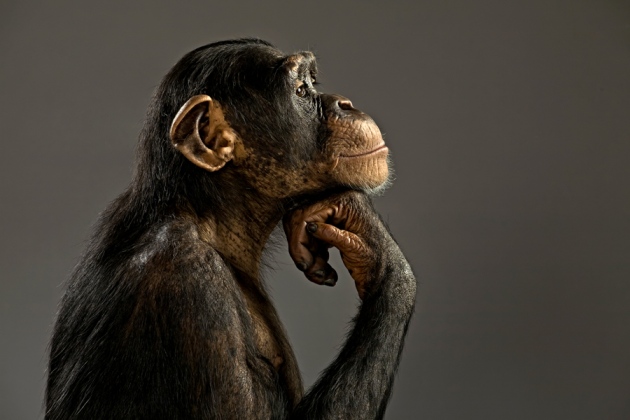 For chimps, nature and nurture appear to contribute equally to intelligence.

Smart chimpanzees often have smart offspring, researchers suggest in one of the first analyses of the genetic contribution to intelligence in apes. The findings, published online today in Current Biology1, could shed light on how human intelligence evolved, and might even lead to discoveries of genes associated with mental capacity.

A team led by William Hopkins, a psychologist at Georgia State University in Atlanta, tested the intelligence of 99 chimpanzees aged 9 to 54 years old, most of them descended from the same group of animals housed at the Yerkes National Primate Research Center in Atlanta. The chimps faced cognitive challenges such as remembering where food was hidden in a rotating object, following a human’s gaze and using tools to solve problems.

A subsequent statistical analysis revealed a correlation between the animals' performance on these tests and their relatedness to other chimpanzees participating in the study. About half of the difference in performance between individual apes was genetic, the researchers found.

In humans, about 30% of intelligence in children can be explained by genetics; for adults, who are less vulnerable to environmental influences, that figure rises to 70%. Those numbers are comparable to the new estimate of the heritability of intelligence across a wide age range of chimps, says Danielle Posthuma, a behavioural geneticist at VU University in Amsterdam, who was not involved in the research.

“This study is much overdue,” says Rasmus Nielsen, a computational biologist at the University of California, Berkeley.  “There has been enormous focus on understanding heritability of intelligence in humans, but very little on our closest relatives.”

But Nielsen expects future research on chimpanzee intelligence to run into some of the same difficulties as studies of human IQ, such as determining the influence of the environment in which a chimp is raised, or the factors it was exposed to as a foetus. It would be interesting, he says, to compare the estimates of heritability of intelligence in wild chimpanzees to those of chimps raised in captivity.

Hopkins' team now plans to repeat its experiment in a group of chimpanzees from another facility, who would be genetically different from the Yerkes centre group. He also hopes to identify specific genes associated with intelligence. The researchers have a head start: in a January paper published in Scientific Reports2, Hopkins and his colleagues found that chimps that were better at following social cues had specific variants of a gene called AVPR1A, which is associated with social behaviour in humans.

Robert Plomin, a behavioural geneticist at King’s College London who studies intelligence in human twins, expects this to be a difficult task. “For 15 years, we’ve been trying to find genes for intelligence, without much success,” he says. Although hundreds of gene candidates have been proposed, each seems to exert only a small effect on an individual’s intelligence, Plomin adds. And chimpanzees are more genetically diverse from one another than humans are3, which may make pinpointing relevant genes yet more difficult.

But Hopkins hopes that the apes could still be a useful model for understanding IQ in humans: chimpanzees raised in captivity are not affected by the same socio-economic and cultural factors that can influence humans’ performance on standardized intelligence tests. This may enable researchers to spot new intelligence genes in chimps, and then search for the effects of these genes in humans.