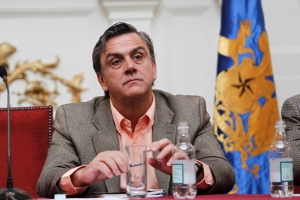 Chilean scientific organizations are alarmed by a suggestion from the country’s economy minister that he should oversee the National Science and Technology Research Commission (CONICYT), the main science funder.

In a newspaper interview last week, economy minister Pablo Longueira said that Chile’s president had asked him to draft a law to relocate the CONICYT from the education ministry, where it has been since its creation in 1967, to the economy ministry.

Longueira argued that the move would strengthen technology transfer, a much-desired objective in Chile, where industry funded just 38.7% of research and development (R&D) in 2010, according to the Ibero-American and Inter-American Network of Science and Technology Indicators (RICYT). The country has been taking steps to remedy this — this month, the Chilean Economic Development Agency, which is controlled by the economy ministry, introduced a tax break for companies investing in R&D (See 'Chile rolls out R&D tax credit to boost research').

In a separate interview, Chile’s education minister Harald Beyer rejected the plan. No one from the president’s office or the economy or the education ministries would comment when contacted by Nature.

The proposal has been condemned by scientific organizations.

“The scientific community has not been consulted,” says Pablo Astudillo, a PhD student in molecular biology at the Pontificial Catholic University of Chile in Santiago, and a spokesman for the campaign group More Science for Chile, which issued a press release criticising the idea. “We fear for basic research. Education and science’s results come in the long run, whereas the economy requires short-term results,” he says.

Longueira’s declaration has revived a long-standing demand from Chilean scientists for a ministry dedicated to science. “Science policies are dispersed in different institutions. We need a high-ranking, centralized body capable of making decisions,” says Astudillo. Part of the funding for applied research comes from the Chilean branch of the international Millennium Science Initiative, a body separate from CONICYT and under the control of the economy ministry.

“We would like to see all science policy under one dedicated ministry,” says Juan Asenjo de Leuze, a chemical engineer at the University of Chile in Santiago and the president of the Chilean Academy of Sciences, which published a report in 2009 calling for the creation of such a ministry.

Scientists are also concerned that simply shifting the funding body to a different ministry will not tackle the basic problems of R&D policy in the country. “The most urgent thing is increasing the science budget to 1% of the gross domestic product,” says Asenjo. Chile’s R&D investment was 0.39% of its gross domestic product in 2008, according to the RICYT.

“Before deciding where to put the CONICYT, the government should put forward a plan for science,” says Jorge Babul, a biochemist at the University of Chile and president of the Chilean Council of Scientific Societies. The last National Science Plan to se signed by the President was in 1988.