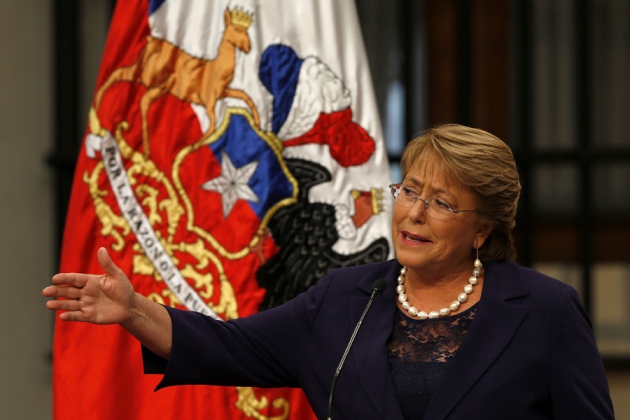 Current Chilean President Michelle Bachelet has her own plans for science governance.

The new government of Chile has shelved plans to create the country’s first science ministry, disappointing thousands of researchers who had campaigned for it.

Former president Sebastián Piñera submitted plans for the ministry to the Senate on 7 March — days before leaving office — in response to long-standing demands by several Chilean scientific organizations. The plans were part of a last-minute legislative package that included three other, unrelated laws.

But now, politicians supporting new president Michelle Bachelet, who was sworn in on 11 March, have derailed the proposal. Senator Jaime Quintana, spokesman for the centre-left New Majority coalition that backs Bachelet, said that the draft laws “are not legitimate” because to enact them would require money that the current government intends to allocate to its own priorities.

“It is a regrettable situation: it was a hard fight until we got the draft law, and now we feel a big discomfort,” says Eduardo Bravo, director of the National Association of Postgraduate Researchers in Santiago, which was among the organizations that had called for the science ministry.

Chile is a small but highly productive player in Latin American science. In 2010, it spent US$1.15 billion on research and development. Although that is equivalent to just 0.44% of its gross domestic product, or 2.8% of Latin America’s total investment in science, the country ranks behind only Brazil, Mexico and Argentina in terms of the number of articles published.

However, science governance in Chile is currently spread across the ministries of education, economy and agriculture. “This has resulted in multipolar governance that has not been capable of establishing a clear agenda of strategies and priorities, or strong networks of scientists,” says Jesús Sebastián Audina, a researcher in science policy at the Spanish National Research Council in Madrid.

“Building a ministry that works may take decades in Chile.”

Jorge Babul, president of the Chilean Council of Scientific Societies in Santiago, adds: “Putting science in a ministry not dedicated to it prevents the minister from spending enough time on research policy.” He thinks that a single unified ministry would ensure “a big leap” in the ability to transfer knowledge within Chile. Bravo says that a dedicated institution would “have more financial independence”.

In April 2013, after years of campaigning, a group of organizations — including several scientific academies and societies and Santiago-based pro-science lobby group the More Science Foundation — presented Piñera with an open letter asking that science policy be unified in a single ministry. The petition had 5,000 signatories.

Piñera responded by creating a working group of academics and politicians, led by engineer and entrepreneur Bruno Philippi, to evaluate Chilean scientific governance and propose changes. In a report released last May, the group urged the government to create the ministry.

Piñera’s 7 March proposal to the Senate was strongly based on that report. According to his draft submission, the ministry would have had two sub-secretariats: one for higher education and another for science, technology and innovation. Furthermore, Chile’s main science-funding body, the National Commission for Scientific and Technological Research (CONICYT), would regain a role in advising the president on science policy that was taken from it by the authoritarian regime of General Augusto Pinochet in 1973. CONICYT’s resumption of this role would ensure that the president is advised by a dedicated science-governance body.

Most of Piñera’s proposal is widely supported by the Chilean scientific community, says Sergio Hojman, a physicist at the University of Chile in Santiago and a member of the working group headed by Philippi. But some scientists are sceptical about the feasibility and benefits of the plan. “Building a ministry that works may take decades in Chile,” says Mario Durán Toro, an engineer at the Pontifical Catholic University of Chile in Santiago. “It would be enough to re-establish the role that CONICYT had before 1974: that would be much more effective and quick,” he says.

As well as potentially taking funds away from the government’s own priorities, the proposed ministry conflicts with the coalition’s plans: Bachelet’s electoral manifesto put science in a sub-secretariat of the economy ministry, not a ministry of its own. Still, Hojman thinks that Bachelet is not necessarily opposed to the science ministry in principle, given that several members of the Philippi commission are supporters of government coalition parties.

The poor timing of the proposal may also have affected its chances. “Presenting it at the last minute is something that was going to be seen with a bad eye by the new government,” says Carolina Muñoz, a chemist and executive director of the More Science Foundation. “But withdrawing it would show a very serious lack of respect towards Chilean scientists.”

Finance minister Alberto Arenas is expected to advise on the financial viability of the science ministry in a report on the state of the country’s finances on 7 April.