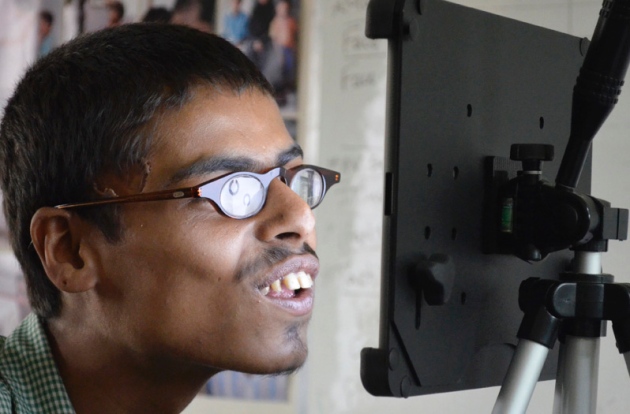 By displaying images on an iPad, researchers tested patients' ability to detect contrast after their vision was restored by cataract surgery.

In a study of congenitally blind children who underwent surgery to restore vision, researchers have found that the brain can still learn to use the newly acquired sense much later in life than previously thought.

Healthy infants start learning to discern objects, typically by their form and colour, from the moment they open their eyes. By the time a baby is a year old vision development is more or less complete, although refinements continue through childhood. But as the brain grows older, it becomes less adaptable, neuroscientists generally believe. "The dogma is that after a certain age the brain is unable to process visual inputs it has never received before," explains cognitive scientist Amy Kalia of the Massachusetts Institute of Technology (MIT) in Cambridge.

Consequently, eye surgeons in India often refuse to treat children blinded by cataracts since infancy if they are over the age of seven. Such children are not usually found in wealthier countries such as the United States — where cataracts are treated as early as possible — but are tragically plentiful in India.

In the study, which was published last week in Proceedings of the National Academy of Sciences1, Kalia and her collaborators followed 11 children enrolled in Project Prakash2, a humanitarian and scientific effort in India that provides corrective surgery to children with treatable cataracts and subsequently studies their visual abilities. ('Prakash' is Sanskrit for light.)

The researchers tested the children's ability to perceive contrast between varying shades of grey, a crucial skill that makes it possible, for instance, to read the words in this article. They used software developed by co-author Luis Andres Lesmes and a team led by vision scientist Peter Bex at Harvard Medical School in Boston for a tablet computer, which displays circles, squares and other shapes. The program varies the size and darkness of the shapes, and the children were asked to name the shapes they were seeing.

The test was administered two times following surgery, six months apart. Of the 11 children, five had no discernible improvement, whereas one child's vision grew worse, probably because of post-surgical complications. Five of the patients showed remarkable enhancement, however, and of these, an 11-year-old and a 15-year-old showed 30-fold improvement in contrast sensitivity. "The visual brain can be plastic for longer than we originally thought," concludes Kalia. "Many of the kids dramatically improve their quality of life."

"This is an exciting new methodology to study development of vision," says developmental psychologist Albert Yonas of the University of Minnesota, who studies similar processes in infants. "It's showing a very large ability of the cortical system to continue to change and develop."

Some of the shapes used for testing sensitivity to contrast.