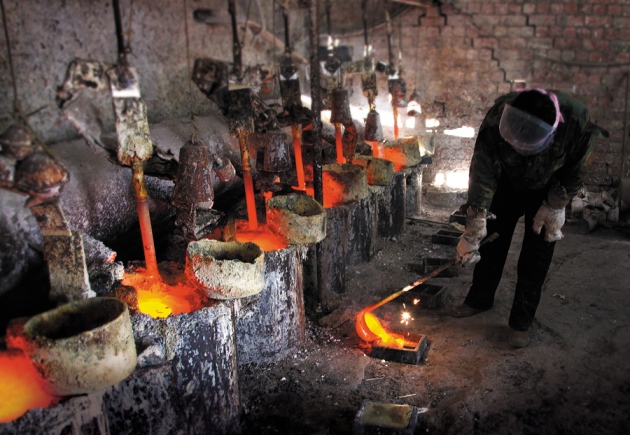 A worker pours lanthanum into a mould in China.

In July 2010, the Chinese government sent a chill through the world's high-technology industries when it announced a 37% cut in export quotas for rare-earth elements — a group of 17 metallic elements that are essential ingredients in display screens, low-energy lighting, high-powered lasers and a host of other twenty-first-century products.

China has a near monopoly on production of these elements, generating 97% of the world's supply in 2010. So although Beijing said that it was just trying to clean up a particularly dirty sector of its mining industry, the cutback sent rare-earth prices soaring and raised the spectre of major economic disruptions. The reality turned out to be less dire: several Western mining companies have now started producing rare earths, and China, responding to demands from the World Trade Organization, has pledged to end the cutbacks by 2 May this year. Nevertheless, the incident prompted the United States and Europe to launch major research initiatives aimed at securing non-Chinese sources of rare earths. Those programmes are now beginning to achieve results.

Central to the effort is a challenge for chemists. The rare earths are chemically almost identical, generally found together in ore deposits and extremely difficult to separate: the standard method involves some 300 steps and the copious use of hazardous chemicals. China has a network of extraction plants that can undercut any other producer in the world, thanks to the country's historically lax attitude towards costly environmental safeguards, along with factories that incorporate the elements into devices. But if chemists can come up with easier, faster, greener and, above all, cheaper extraction methods, then the balance could shift. Other countries could afford to exploit their own rare-earth deposits, and to recover rare-earth elements from their electronic waste.

“For any Western company ever to be competitive,” says Jack Lifton, a consultant for the rare-earth mining industry who works in Farmington Hills, Michigan, “it has to find ways to produce the individual rare earths at lower cost than China.”

Disentangling the rare earths is so hard that it took chemists more than a century to identify and name them all: the first, yttrium, was discovered in 1794, yet the last two, lutetium and ytterbium, were not separated until 1907 (see 'Birds of a feather'). Early manufacturers did not bother purifying the metals. The first applications, early in the twentieth century, used a blended 'mischmetal' in cigarette lighter flints and tracer bullets.

Individual rare-earth elements did not begin to find uses until after the Second World War, when the problem of how to separate them caught the attention of Frank Spedding, a chemist at what is now Iowa State University in Ames who had pioneered uranium purification for the Manhattan Project. Spedding perfected a method called ion-exchange chromatography, in which a mixture of rare earths was washed through a vertical glass column packed with polymer beads. The rare earths stuck to the beads, and were then washed off with dilute citric acid.

Spedding adjusted the acid's pH so that each element would dissolve from the polymer at a slightly different rate; as a result, the ions travelled down the column at different speeds before emerging at the bottom in bands of slightly different composition. With enough repetitions, researchers could separate high-purity elements in sufficient quantities to study their properties. 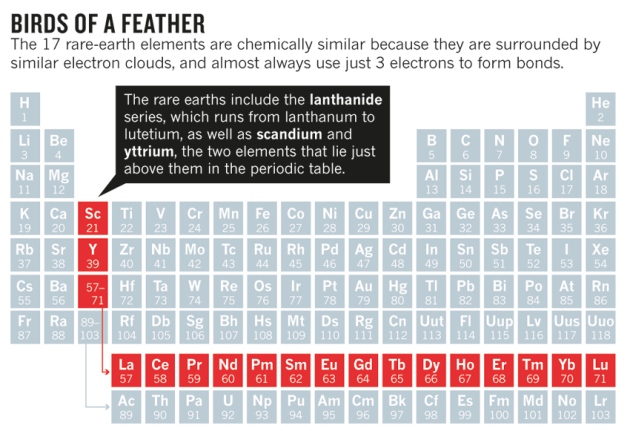 This led to an explosion in rare-earth applications, starting in the early 1960s with the discovery that a pinch of europium oxide mixed with other materials made a bright red colour for television screens. By 1965, soaring demand had led Western mining companies to expand europium production and construct the first separation plants. Because ion exchange was unsuited to large-scale production, the plants used a method called solvent extraction. A mixture of rare earths is dissolved in water, then shaken with organic solvents containing extractants — compounds that bind to some rare-earths more strongly than others. The rare earths move into the organic solvent, and after the mixture has settled, they can be chemically removed from the extractants and redissolved in water. It takes hundreds of repetitions to isolate the elements.

Over the next few decades, Chinese chemical engineers began to up the solvent-extraction technology for use at their own facilities, which were soon able to sell individual rare earths of higher purity and at lower prices than Western producers could. By 1999, China had near-total control of the global rare-earth supply.

One way to change that situation is to step up production at the few solvent-extraction plants outside China, while finding ways to make the method cheaper and more efficient. “Changing the chemistry is a lot easier than changing the infrastructure,” says Alex King, director of the Critical Materials Institute (CMI): a US$120-million research hub headquartered in Ames, Iowa, that was set up by the US Department of Energy in 2013 to address supply problems in rare earths and other materials.

Some researchers are trying to change the chemistry by finding extractants that can do a better job of differentiating between the rare earths. It is not easy, says Scott Herbst, a chemical engineer at the CMI who is doing just that at Idaho National Laboratory outside Idaho Falls. “You're separating almost apples from apples.” He and his colleagues are tackling the problem both theoretically, by trying to design better molecules with computational modelling, and empirically, seeing whether they can adapt extractants developed for other industries.

Other researchers are looking for better solvents. At the Catholic University of Leuven (KU Leuven) in Belgium, for example, chemist Koen Binnemans is making and testing a variety of ionic liquids: salts that are molten at room temperature. These typically consist of a large organic molecule that carries an electric charge, coupled with a small inorganic ion of the opposite charge. Binnemans says that such ionic liquids are safer, less volatile and more recyclable than the organic solvents most commonly used in industry — not to mention that they can hold around six times the number of dissolved rare-earth ions. Binnemans is trying to develop ionic solvents that can also function as extractants.

Some companies are adapting separation methods from other industries. “If they can cut the cost, they will be very competitive,” says Lifton. At one deposit in Alaska, for example, Ucore Rare Metals of Bedford, Canada, has turned ore into gram-scale quantities of 99%-pure individual rare-earth elements, using molecular recognition technology. Developed by the IBC Advanced Technologies in American Fork, Utah, this technique has been used industrially to remove bismuth impurities from copper, and to recover platinum-group metals from scrap catalytic converters.

In the Ucore system, a solution of mixed rare earths passes in sequence through 17 different columns, each loaded with a compound tailored to bind to a specific element. That element can then be extracted in 99%-pure form by rinsing the column with dilute acid. Ucore says that the process requires no more than a few repetitions, depending on the desired purity, and so has the potential to be both efficient and environmentally friendly. The company is working with IBC scientists to prove the technology at a pilot plant over the next few months.

Digging for rare earths is not always an option — particularly in Europe, where deposits are few and opposition to mining is widespread. But developed nations all over the world have large potential sources of rare earths in the form of used electrical devices. Most fluorescent lights contain europium, yttrium and terbium, for example, and strong permanent magnets typically contain neodymium and dysprosium. “When these reach end of life, we still send them to China” for recycling, says Tom Van Gerven, a chemical engineer at KU Leuven. “We would like to stop, and we can do that if we perform the recycling in Europe.”

In recycling, the challenge lies in extracting dilute resources: electronic waste typically has a lower concentration of rare earths than ore does. But any one component also tends to have fewer elements to separate.

Usually, magnets must be dissolved in strong acids to extract the rare earths. Van Gerven is looking for an alternative method: he blasts the solid magnets with ultrasound, commonly used in chemistry laboratories to clean apparatus by dislodging particles from its surfaces. Although experiments are still ongoing, he hopes that the ultrasound will erode the magnet surfaces, allowing extractants to pull out the rare-earth elements without the need to dissolve the entire object.

The CMI also has a team focused on recycling. In one project, extractants are bound to a membrane, where they can catch the rare earths as a solution flows past. This technique can separate elements from even very dilute solutions, says project leader Eric Peterson, who is based at Idaho National Laboratory. He expects full commercialization in the next year or two.

The real-world effect of all of this research is difficult to predict — not least because China is a moving target. Beijing is working hard to reform and strengthen control over its rare-earth industry by consolidating 140 rare-earth companies into 6, cracking down on illegal mining, eliminating unneeded separation plants to reduce supply and raise prices, and conducting environmental remediation to make the industry profitable and socially acceptable. “It was a cowboy industry,” says Lifton. “They're reining it in.”

These actions could add to the operating cost of China's separation industry, and make it easier for Western plants to compete. But separation is not the whole story, says King. Western manufacturers still have nothing to rival China's network of factories that turn separated rare earths into components such as monitors, magnets and lights. “All of the links in the chain have to be there,” he says. Until such plants are built in the West, rare-earth producers such as Molycorp of Greenwood Village, Colorado, and Lynas of Perth, Australia, will have few places to sell their output — except China. And with global demand threatening to outstrip that country's mining capacity, Chinese producers are already looking to feed their factories by mining deposits of rare-earth elements overseas.

So even if Western producers manage to develop separation processes that can produce the individual elements cheaply, economics might eventually force an ironic turnaround — with China importing rare earths from the West.